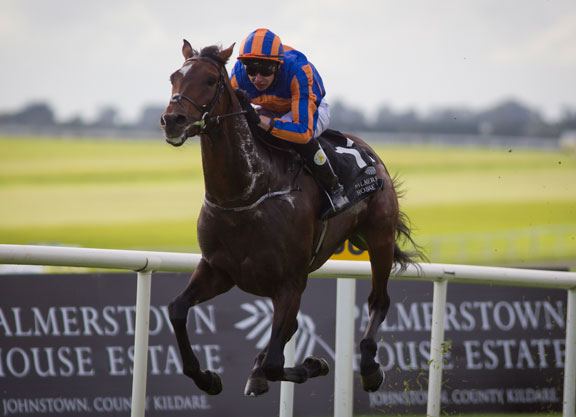 Wings Of Eagles (Fr) (Pour Moir {Ire}-Ysoldina {Fr}, by Kendor {Fr}), who won the G1 Investec Derby in 2017, and high-class stayer and MG1SW Order of St George (Ire) (Galileo {Ire}-Another Storm, by Gone West) have been recruited to Coolmore’s National Hunt division and will stand at The Beeches Stud and Castlehyde Stud in Ireland, respectively. Both will command €6,500.

Wings Of Eagles, who was bred by Aliette and Giles Forien at Haras de Montaigu in France, stood his first year at stud at his birthplace for €8,000 this term, while Order of St George will be standing his first season in 2019.

“He’s an Epsom Derby winner from the Montjeu (Ire) sire line and is a fine, big horse, seriously good-looking and good-actioned-just the type people in our business want to breed to,” said The Beeches Stud Manager Robert McCarthy.

“Order of St George is a lovely mover with quality, size and scope in abundance,” commented Cathal Murphy of the two-time G1 Irish St. Leger hero. “He won a total of 11 races including the Irish St Leger as a 3-year-old by a margin of 11 lengths, which earned him a Timeform rating of 129, along with the Ascot Gold Cup the following season. No horse since Fame And Glory has retired straight to [a] National Hunt stud with such a high rating and we’re delighted to have him at Castlehyde.”