Coolmore Among First To Commit To Pegasus Turf 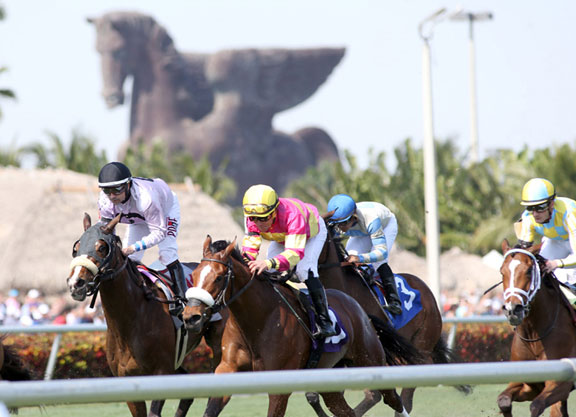 Horses racing at Gulfstream with the Pegasus statue in background | Horsephotos

Gulfstream Park management has received assurance from the Coolmore racing operation that it will be sending horses to race in both the GI Pegasus World Cup and the inaugural GI Pegasus World Cup Turf. Attaching the Coolmore brand to the $7-million turf race is a major plus for Gulfstream Park and it could go a long way towards convincing others that the race is something they should consider.

“Coolmore has told us they have at least one horse for each race,” said Tim Ritvo, the COO of The Stronach Group, which operates Gulfstream Park. “They've been a great supporter of this series since the beginning. With the type of quality stable they have, this is what they are looking for, these kinds of great races. We're really appreciative of them and their contributions to the industry; it takes two. Frank and Belinda [Stronach] have contributed to the industry by putting up a race like this and in return we have given participants like Coomore that always support the industry a chance to run for a very big purse. Coolmore is an iconic name in racing and we are really thrilled that they will be participating.”

Ritvo said he has received inquiries from other European trainers and owners, but Coolmore is the only one to commit to the race thus far. Coolmore has not told anyone from The Stronach Group which horses it might send for the two races.

The Pegasus races will be held on Jan. 26. The dirt race, run at a mile-and-an-eighth, is worth $9-million. The distance of the turf race will be a mile-and-three-sixteenths.

The Pegasus World Cup was first run in 2017 with a purse of $12-million. In order to enter, the participants had to pay a $1-million entry fee. The same fee applied when the race was held earlier this year, yet the purse was increased to $16-million. Coolmore bought slots both years.

For the 2019 edition, Gulfstream decided to split up the $16-million, creating a grass race worth $7-million while lowering the purse of the dirt race to $9-million. It now costs $500,000 to enter one of the races.

At $7-million, the Pegasus World Cup Turf is worth more than any single race run in Europe. When converted to dollars, the Prix de l'Arc de Triomphe is next at roughly $5.65-million.

The obstacle Gulfstream faces when it comes to attracting European horses is the timing of the race. Group 1 level flat racing in Europe ends in late October and does not continue until the following spring. The higher class horses are generally given the winter off before gearing up for spring and summer races.

“Obviously, we were worried about that,” Ritvo said. “But with our racing schedule there's nothing we can do about that. We hope to change the culture, but we know that will take time. Maybe, with a race of this magnitude and with the amount of money involved, they can stretch out the calendar over there a little bit. That's our hope. The first year will be the biggest struggle. But as long as we show consistency and stick with this, in time we hope more people will plan to run in the race. In the beginning you'll probably see the largest participation in this race from American stables, but as the years go on we are hoping to get worldwide attention and participation.”

Gulfstream management is also working on bringing horses from the Southern Hemisphere.

“We haven't heard a lot from people down there yet,” Ritvo said. “We're hoping the word gets out. The announcement of the turf race came just a few months ago. [Stronach executive] Mike [Rogers] has worked hard on hiring agents in those jurisdictions and letting them know what we have available, so we are hoping to get some horses from the Southern Hemisphere.”

Rogers added that he is hoping to attract at least two horses from Japan for the turf race and will be visiting that country next week to try to firm up plans for the potential participants.

Gulfstream remains committed to building the Pegasus Day card and Ritvo said a race for fillies and mares could be added as soon as 2020.