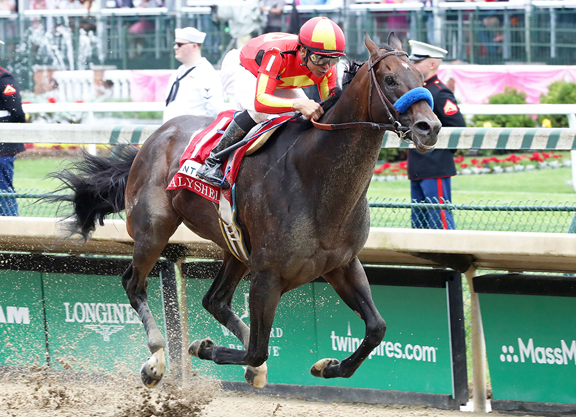 Saturday's prestigious GI Whitney S. at Saratoga has drawn top-class runners from around the world for what is sure to be a memorable renewal. MGISW and 'TDN Rising Star' McKinzie (Street Sense) ships in from the West Coast for Hall of Famer Bob Baffert. Winner of the GI Pennsylvania Derby and GI Malibu S. last term, the bay came up just a half-length short of the late Breeders' Cup winner Battle of Midway (Smart Strike) in the GII San Pasqual S. Feb. 2 and was just a nose shy of MGISW Gift Box (Twirling Candy) after a gritty stretch battle in the GI Santa Anita H. Apr. 6. Returning to winning ways with a dominant score in the GII Alysheba S. on the GI Kentucky Derby undercard, he was a close second after a tough trip in the GI Met Mile at Belmont last time June 8.

The globetrotting two-time G1 Dubai World Cup victor Thunder Snow (Ire) (Helmet {Aus}) also makes the trip in to attempt further glory at the Spa. Runner-up in last term's GI Jockey Club Gold Cup S. at Belmont, he was a good third in the GI Breeders' Cup Classic at Churchill Downs Nov. 3. Kicking off this term with a second in the G1 Al Maktoum Challenge Round 3 at Meydan Mar. 9, the Godolphin runner successfully defended hit title in the Dubai World Cup Mar. 30, becoming the first repeat winner, and was third last time on these shore in the Met Mile.

“I think the two turns will be helpful and I think what you saw was that he was able to hang on in a very contentious field in the Met Mile,” said Godolphin's Jimmy Bell. “A mile and a quarter is right up his alley, but I think he'll be very competitive going a mile and an eighth.”

Representing the Empire State are a pair of Grade I winners in Vino Rosso (Curlin) and Yoshida (Jpn) (Heart's Cry {Jpn}). Successful in last term's GII Wood Memorial S., Vino Rosso opened his 2019 account with a win in Aqueduct's Stymie S. Mar. 9 and was fourth next out in that venue's GI Carter H. Apr. 6. The chestnut broke through at the highest level last time in the May 27 GI Santa Anita H.

“I think the nine-furlong distance is ideal for him if there's an honest pace,” said trainer Todd Pletcher. “He's a very versatile horse. He's been training great. I think he's a much better 4-year-old than he was a 3-year-old.”

Securing his first win at the Grade I level  on turf in the Old Forester Turf Classic S. at Churchill last year, Yoshida secured a top-level victory on dirt over the Saratoga main track last summer in the GI Woodward S. in September. Fourth in the Breeders' Cup Classic, the blaze-faced bay returned to turf in the GI Pegasus World Cup Turf S. Jan. 26, finishing sixth. He filled the same spot in both the Dubai World Cup and the GII Stephen Foster S. on the Churchill main June 15.