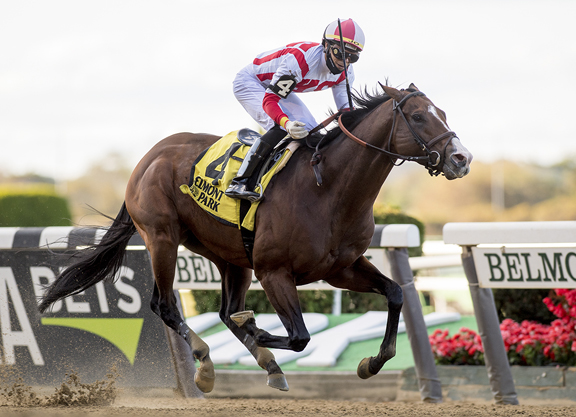 “He was one of those horses that there was a buzz about before he ever stepped foot on a racetrack,” Airdrie Stud's Bret Jones said of their new addition, Grade I-winning 'TDN Rising Star' Complexity (Maclean's Music–Goldfield, Yes It's True).

A Stonestreet-bred half-brother to a Breeders' Cup runner-up and a $375,000 KEESEP yearling purchase by Mike Ryan, Complexity was the talk of the Saratoga backstretch in the summer of his juvenile season. Horseplayers anticipated the Chad Brown pupil's unveiling after a stretch of speedy breezes, including a five-furlong move in 1:00 2/5 work Aug. 26, but they had to wait until closing day at the Spa for the colt to reach the starting gate.

Sent off as the heavy favorite, the bay took the lead early over a salty maiden field that included eventual graded winner Harvey Wallbanger (Congrats) and dual stakes winner King for a Day (Uncle Mo). He coasted home to win by over four lengths, becoming the third 'Rising Star' of the 2018 Saratoga meet for Klaravich Stables and Chad Brown.

Complexity returned to the starting gate again as the favorite in the GI Champagne S. at Belmont and didn't disappoint as he passed the wire three lengths ahead of Code of Honor (Noble Mission {GB}).

“Honestly, we would put the Champagne up against any race there is when you're talking about what can make a potential stallion,” Jones said. “He went in 1:34 and change. You look at the honor roll of Champagne winners, it's incredible. It shows what a precocious horse you are and can do it going a mile, which I think is a great indicator of talent.”

The colt failed to fire in the GI Breeders' Cup Juvenile and was sidelined until the summer of his 3-year-old season due to a quarter crack. But he eventually bounced back with a 7 1/4-length win over older horses in November of his sophomore year, earning a three on the Ragozin sheets.

As a 4-year-old last year, he returned to the winner's circle in an allowance at Belmont, besting Win Win Win (Hat Trick {Jpn}), and then got caught by the same rival in the final strides of the GI Forego S.

In his next start, he bested MGISW Code of Honor in the one-mile GII Kelso H.

“He beats an exceptionally-talented horse in Code of Honor and really does it the right way, wins it going away,” Jones noted. “He does it in 1:33 and change. There aren't many exceptional 2-year-olds that can come back and be a top 4-year-old, but that's what this horse did. He ran one of the highest Beyers of any horse last year, running a 110.”

After a fourth-place finish in the 2020 GI Breeders' Cup Dirt Mile, Complexity took up stud duty at Airdrie.

“I'm very grateful that we got the opportunity to stay on this horse because everybody who watched the Champagne, I think, was very interested in him as a stallion,” Jones said. “We're very, very grateful to Chad [Brown] and Seth Klarman for giving us the chance. We just always thought he was special and we're going to try hard to make sure he's a special name in this business for a long time.”

Jones said many breeders have been sold on the new stallion prospect upon seeing him in person.

“One of the obvious attractions of Complexity is just how beautiful of a horse he is,” he said. “That's very evident in the price tag and the purchaser. We'd put Mike Ryan's eye above just about anybody who has every looked at a horse. So that was very attractive commercially. $375,000 was the highest price of any Maclean's Music of that crop and he looks every bit the part.”

He continued, “When you combine that with the race record, you have not only what we think is a very commercial sire, we actually have a stallion prospect that we think can get fast horses, which at the end of the day is a lot more important than anything else.”

Complexity joins fellow Klaravich Stables Grade I winner Cloud Computing–who stands at Spendthrift Farm–as the first two sons of Maclean's Music at stud. The Hill 'n' Dale sire entered stud in 2013 with a $6,500 stud fee and has quietly made his way up the general sire's list to earn a nearly quadrupled fee.

“You have to love the start he's gotten off to,” Jones said of Maclean's Music. “He's really making his own way from a humble stud fee to really one of the more exciting young stallions in the industry. So to have a really talented son of his is certainly something that attracted us to him.”

Complexity is out of the three-time stakes-producing mare Goldfield (Yes It's True) and is a half-brother to Stonestreet homebred Valadorna (Curlin), who was runner up in the 2016 GI Breeders' Cup Juvenile Fillies and winner of the 2018 GIII Doubledogdare S. at Keeneland.

“It's really brilliance on brilliance,” Jones said of the pedigree. “And with a Stonestreet family, we know the kind of quality they have. It's the type of talent, both top and bottom, that makes you feel really good about putting him in the barn.”

Jones added that with his breeding, Complexity is an easy match for many mares.

“He really goes so well with so many of the important sire lines that you'd like to get as a young stallion,” he said. “He crosses beautifully with A.P. Indy, Storm Cat and so many of the Deputy Minister horses. So he's a very easy horse to breed and we're doing what we really think is important and that's giving him every chance by supporting him.”

Jones reported that 24 Airdrie mares are slated to visit the new addition including Grade I producers Don't Trick Her (Mazel Trick) and Kittery Point (Include), as well as two-time champion producer Ms. Cornstalk (Indian Charlie).

Complexity kicks off his stud career at Airdrie fully booked off a $12,500 initial fee.

“Everything is in place to have a very successful horse,” Jones said. “He's been exceptionally popular. He was booked full almost immediately. He's got every opportunity and I think we've got him priced to where he'll still get those mares in the next couples years. Then after that, it's up to him.”