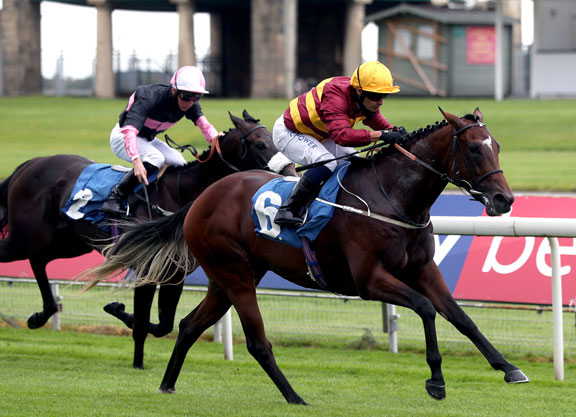 One of the past week's most talked-about horses is available for public scrutiny on Thursday as 'TDN Rising Star' High Definition (Ire) (Galileo {Ire}) reappears in Thursday's G2 Al Basti Equiworld Dubai Dante S. at York.

Originally scheduled to tackle Lingfield's undulations on Saturday, the unbeaten G2 Beresford S. winner instead races over this contrastingly flat terrain with an abnormal blood count amounting to a minor fork in the road. Hot favourite for the Derby prior to his setback, he now faces a race to restore his position at the head of the pecking order after fellow TDN Rising Star Bolshoi Ballet (Ire) (Galileo {Ire}) was so impressive at Leopardstown on Sunday. “Obviously everybody knows the plan was originally to go to Lingfield on Saturday with him. We couldn't do that, so now he is going to York,” Aidan O'Brien commented. “We're just glad to get him out and then we can see where we go from there.”

Teme Valley's Gear Up (Ire) (Teofilo {Ire}) has winning course form, having captured the G3 Acomb S. in August and he had Bolshoi Ballet behind as well as the significant subsequent scorers Makaloun (Fr) (Bated Breath {GB}), Sweet Lady (Fr) (Lope de Vega {Ire}) and Best of Lips (Ire) (The Gurkha {Ire}) when taking a competitive edition of the G1 Criterium de Saint-Cloud in October. “It looks a competitive race, but he's been here twice before and won both times,” trainer Mark Johnston said. “The ground shouldn't trouble him. I think a mile and a quarter is most probably his minimum trip now, but it's a stepping stone to run in the Derby next.”

Adding ballast is M M Stables' Apr. 23 G3 Sandown Classic Trial winner Alenquer (Fr) (Adlerflug {Ger}), while representing Godolphin is the unbeaten Apr. 16 Newbury conditions scorer Hurricane Lane (Ire) (Frankel {GB}). The latter's trainer Charlie Appleby said, “We are pleased with how Hurricane Lane is coming into this race, off the back of a nice win on his seasonal return. He has come forward for that run and we feel that the track and ground at York will suit. It's the next test for him to see where he is going to end up over the forthcoming months.”

Jim Bolger's runners can never be ignored and it will be possible to put Bolshoi Ballet's form into some sort of perspective as the G3 Eyrefield S. winner Flying Visit (Ire) (Pride of Dubai {Aus}) was 2 1/4 lengths off that Ballydoyle runner when second in the G3 Ballysax S. at Leopardstown Apr. 11.

Also on York's card is the G2 Al Basti Equiworld Dubai Middleton Fillies' S., which lacks the star it often attracts. Aidan O'Brien sends over the 14-furlong G3 Stanerra S. winner Passion (Ire) (Galileo {Ire}), who was also third in the G1 Irish Oaks and G1 QIPCO British Champions Fillies & Mares S. at a mile and a half. “She was very consistent last year and seems in good form, but she's just ready to start,” her trainer said. “She's versatile regarding trip, but I imagine as the season goes on she'll be stepping back up. A mile and a half is probably her best trip.”

In an open race, Cheveley Park Stud's 'TDN Rising Star' Cabaletta (GB) (Mastercraftsman {Ire}) is an interesting contender reverting in trip. “She's in great form and has been training really well,” trainer Roger Varian said of the Listed Apthrodite S.-winning daughter of Allegretto (Ire) (Galileo {Ire}) who improved markedly with age. “She's a filly who stays a mile and a half, but she's not short of pace and her runs over 10 furlongs as a 3-year-old were very good.”