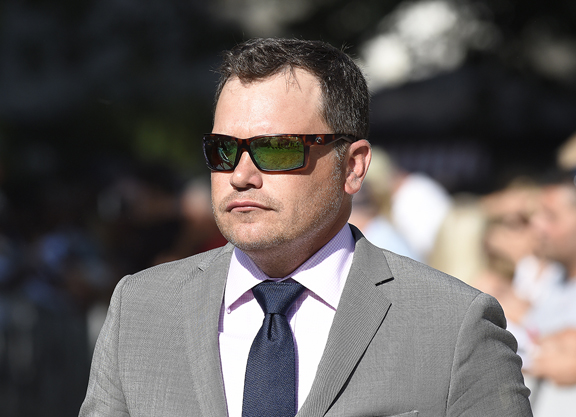 LOUISVILLE, Kentucky–Despite a stable half the size it was at its peak in 2016, trainer Ben Colebrook is having the best year of his career this season, and could pad his stats further with two Breeders' Cup contenders.

First up is KRA Stud Farm's Knicks Go (Paynter), who will look to shock the world for a second-straight time in the GI Sentient Jet Breeders' Cup Juvenile. A debut winner at Ellis July 4, the grey was fifth in Saratoga's GIII Sanford S. 17 days later and third in the Arlington-Washington Futurity Sept. 8 before running away to a five-length victory at 70-1 in Keeneland's GI Claiborne Breeders' Futurity Oct. 6. Knicks Go's victory was 40-year-old Colebrook's first at the Grade I level.

“It surprised me a little bit in how easily he beat a pretty good field, but he did have a dream trip and that was probably part of it,” the Lexington, KY native said. “I thought he belonged in the race–to me, his two races before that you could kind of draw a line through–so I'm kind of thinking of it like he's only run twice. He's in great form right now. He came out of that race even better than he went in. He's always been kind of laid back, but he came out of the race wanting to do more in his gallops and he's just feeling good. He's sort of just become a man, so to speak.”

While Knicks Go might just be coming into his own, Colebrook's other Breeders' Cup runner has been there for years now. Limousine Liberal (Successful Appeal) will contest his third GI TwinSpires Breeders' Cup Sprint in four years–his connections opted to skip last year's race at Del Mar by design. The hard-knocking 6-year-old has bankrolled more than $1.7 million to date, and annexed the GII Churchill Downs S. here in May before finishing third in the GI Metropolitan H. and cutting back to take the GII Belmont Sprint Championship July 7. He enters off of thirds in the GI Forego S. and GII Phoenix S. behind a couple of these foes.

“It's been amazing to have a horse this consistent who shows up every time,” Colebrook said. “He's just been a pleasure. He's kind of a throwback horse–he lays it all on the line every time, and I think he can do it anywhere from six furlongs to a mile, too. He's just a really neat horse.”

Bred by Mike and K.K. Ball and campaigned in K.K.'s name, Limousine Liberal boasts twice as many wins under the Twin Spires–six–as the rest of the field combined.

“It certainly can't be a disadvantage considering he's won five straight stakes over the track,” said Colebrook. “We're confident in our horse over the racetrack, whereas some people don't know how their horse will handle the track and some have had bad races over the track… We're going to need every advantage to be involved in a race like this. Everything's going to have to go perfectly, not just for us, but for whoever wins the race. I don't think there's a lot really separating the top five or six horses.”

Colebrook currently trains 38 head–down from as many as 78–and he says he's happier to keep the barn a bit smaller but of higher quality overall.

He's had a particularly good season with juveniles this year. In addition to Knick's Go's big win at Keeneland, the Balls' Into Trouble (Into Mischief) annexed the Arlington-Washington Lassie S., while Life Mission (Noble Mission {GB}) and Blame the Frog (Blame) finished second and third, respectively, in the $500,000 Kentucky Downs Juvenile Turf Sprint S. Beach Getaway (Run Away and Hide) was third in the Debutante S. back in June.

Colebrook has two other promising 2-year-olds, owned by high-profile connections, who haven't even made it into stakes company yet.

Claiborne Farm and Adele Dilschneider's Wrath (Flatter), who had some buzz behind him earlier this year, has recently gotten back on the worktab. He was second on debut at Belmont back in May before fading to sixth after a wide trip in a key Ellis heat July 29.

“From really early, he was always kind of number one [among the group of 2-year-olds], and he still might be–I still think he'll be a very good horse,” Colebrook, who trains four for Wrath's powerful owners, said. “He's just taken some time to do it. He was doing everything so easily that we decided to take him to Belmont, and he ran very well that day, but then we took him down to Ellis and it didn't go according to plan. But he's come back and he's doing well, working at Keeneland.”

He credits his year-round presence in Lexington as a key factor to picking up clients like Claiborne.

Colebrook also sent out Fancy Dress Party (Munnings) to a good-looking 3 1/4-length debut score in a sloppy off-the-turf sprint in Lexington Oct. 26 on behalf of the Roth family's LNJ Foxwoods.

“I was on the filly for Mike and K.K., we had vetted her [at last year's Keeneland September sale], but we had already spent our money,” Colebrook said when asked how he came to train one for another big name. “I'd known [LNJ co-advisor] Jason Litt for a while, so I reached out to them when they bought her and told them that if they'd like to leave her in Kentucky I'd love to have her. They said they'd keep me in mind, and when she was ready to be sent to the track, they called me out of the blue. It was a pleasant surprise.”

Of expectations heading into last week's race, he said, “I thought she'd run well, but I didn't know if she'd be the type to win first out like that. She'd shown the tendency to not break real well, so going 5 1/2 furlongs on the dirt I was a little worried, but she broke fine and Julien [Leparoux] gave her a very patient ride. Going in, I thought maybe she'd be better on turf–she just has kind of a round action about her–but now I don't know that she is solely turf. We'll probably keep her on the dirt for now, but we have the grass angle to play with, which is always nice.”

Colebrook has already begun further building for the future–he bought some pricey yearlings at this year's Keeneland September for a new group, and a 20-acre farm with his wife Marina some 11 or 12 minutes from Keeneland.

Buying on behalf of New River Equine, an entity that includes the Balls, Colebrook picked up three well-pedigreed youngsters at September for a combined $1.625 million, topped by a $900,000 Tapit filly (hip 143) from the highly productive family of Grade I winners Got Lucky, Rhythm, Girolamo, Imagining, Super Saver, Blue Grass Cat, Callback, et al.

“That's the most expensive horse that I've gotten to pick out at the sales, for sure,” Colebrook said. “Her pedigree goes back to a good Phipps family–she's got a great pedigree–and you've got to like Tapit fillies. We looked at all the Tapit fillies at September and also [Fasig-Tipton] Saratoga, and I thought she was at the top of the list. For us, she was one we really honed in on.”

Colebrook's father John was a farm manager in Kentucky, and Ben grew up helping his dad break babies before moving on to stints at Bill Harrigan's Miacomet Farm and later as an assistant for Christophe Clement. He'll get to call upon those early experiences again on his own farm.

“I'll use that as a place, ideally, to send horses after they run for a week or two so they can just be a horse, get outside and eat grass. Plus, I'll also use it for lay-ups and if I need to break babies of my own… Hopefully it'll be another tool in my arsenal as a trainer.” —@BDiDonatoTDN