Code of Honor A Fitting Winner of Travers 150 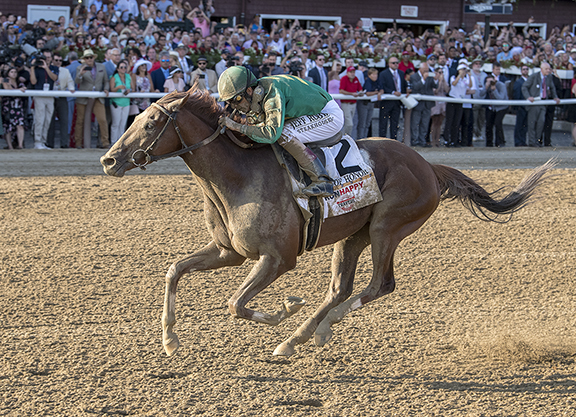 SARATOGA SPRINGS, N.Y.–In 1989, Shug McGaughey captured his first GI Travers S. with future Hall of Famer Easy Goer. So, it was only fitting that on the 30-year anniversary of that accomplishment, the Hall of Fame conditioner won the 150th renewal of the Midsummer Derby with Code of Honor (Noble Mission {GB}).

Unlike Easy Goer, who entered the Travers off wins in the GI Belmont S. and GI Whitney S., Code of Honor was coming off a victory in the GIII Dwyer S. and did not previously have a Grade I to his name, resulting in odds of 4-1. Away in good order from the two-hole on a picture perfect summer day, the W.S. Farish homebred was reserved near the back of the field by John Velazquez, sitting in ninth as newly blinkered 2-1 favorite Tacitus (Tapit), 3-1 second-choice Mucho Gusto (Mucho Macho Man) and GII Jim Dandy S. victor Tax (Arch) rushed up to the front. Tacitus, most recently second in the Jim Dandy, won the battle for control with GI Haskell Invitational S. runner-up Mucho Gusto keeping him honest from a close-up second and Tax perched to their outside in third through a sharp :23.11 opening quarter.

Running two-wide, Code of Honor maintained his position back off the pace as Mucho Gusto headed Tacitus through a half in :47.26. Tacitus re-engaged the California raider and the pair went head-to-head with Tax keeping a watchful eye in third through three-quarters in 1:11.21. Expertly handled by Velazquez, Code of Honor made an eye-catching move approaching the far turn, charging up the outside to put himself in contention. The top two continued to slug it out around the bend with Tacitus two-wide and Mucho Gusto four-wide, leaving the fence open for Owendale (Into Mischief) to attempt to sneak through. However, none of them proved to be a match for Code of Honor, who came roaring down the lane, inhaling his foes with ease, and powering clear for a dominant three-length score.

Tacitus battled on to be second with Mucho Gusto holding strong for third. Godolphin homebred and Curlin S. runner-up Endorsed (Medaglia d'Oro) rallied from last to be fourth and Owendale, who never proved to be a serious threat, finished fifth.

It was the fourth Travers win for McGaughey, who captured the 1990 renewal with Rhythm and the 1998 edition with Coronado's Quest, in addition to his 1989 score with Easy Goer. It was Velazquez's second victory in the Midsummer Derby, having captured the 2005 renewal with Flower Alley. The victory was also the third of the day for the veteran rider, who won the GI H. Allen Jerkens Memorial S. aboard Mind Control (Stay Thirsty) and captured the GII Ballston Spa S. on Significant Form (Creative Cause).

“He's been a bit of a Jekyll and Hyde horse,” McGaughey said. “Today, he put it all together. He trained really well. The Dwyer was a really good race, so we were hoping we were going to see what we saw.”

“I never had any doubts about distance as a problem, just him putting his mind to running,” Velazquez said. “Today, I made sure, when I got him out to the clear, he responded right away, so I was very happy for him. Obviously, we've been looking for this kind of performance for a long time. He's a late foal, not really knowing what to do [even though he's] run some really big races. He's never really put it together until today.”

A sharp debut winner going six panels at Saratoga about a week before last year's Travers, Code of Honor made a bold late run to be second behind 'TDN Risng Star' Complexity (Maclean's Music) in Belmont's GI Champagne S. Oct. 6. The chestnut was getting all the hype heading into the GI Breeders' Cup Juvenile, but scratched the morning of the race with a temperature.

Kicking off this term with a non-factor fourth as the favorite in Gulfstream's Mucho Macho Man S. Jan. 5, Code of Honor was let go at 9-1 in the GII Fountain of Youth S. in Hallandale Mar. 2 and produced the run many expected in his prior start to win by 3/4 of a length. Running on late to be third behind Maximum Security (New Year's Day) in the GI Florida Derby Mar. 20, the homebred crossed the line behind Maximum Security and Country House (Lookin At Lucky) in the GI Kentucky Derby May 4, but was promoted to second via DQ. Despite Velazquez losing the whip in Belmont's one-mile Dwyer July 6, Code of Honor unleashed a powerful late rally to win by 3 1/4 lengths.

Code of Honor, who is a May 23rd foal, is the first Grade I winner by Noble Mission, a full-brother to superstar Frankel (GB) (Galileo {Ire}), who stands at Farish's Lane's End Farm, and who has also produced the Group 3 winner Spanish Mission in Europe. The winner's dam Reunited, victress of the 2005 GIII Thoroughbred Club of America S., is also responsible for 2016 GII Best Pal S. runner-up Big League (Speightstown) and a yearling colt by Karakontie (Jpn). The 17-year-old mare produced a colt by Lane's End's Honor Code May 1 of this year and was bred back to the farm's Quality Road. Code of Honor's broodmare sire Dixie Union was also a member of the Lane's End stallion roster and his daughters are responsible for 38 stakes winners to date, including champion Caledonia Road (Quality Road) and Grade I winners Klimt (Quality Road), Mor Spirit (Eskendereya), New Year's Day (Street Cry {Ire}) and Salty (Quality Road).

What They're Saying at the Travers…

“Really, we thought they'd go ahead and clear us. We made the choice beforehand to go ahead and try and get him in the race, let him break and if they want to try to outrun you, make them work for it a little bit. He got the rail trip. We thought when Mucho Gusto kind of went, you'd have thought he'd have come over to the fence but he stayed out, so that gave us the rail on the second turn. I had one eye on the winner and one eye on mine. It looked like there was a good chance we were going to outduel Mucho Gusto but the winner, I mean he rolled by pretty fast. The horses ran good. When the day is over, I don't think we really have any excuses.” -Bill Mott, trainer of runner-up Tacitus.

“We broke really well. Blinkers on, we thought it would give him speed and it did. He was closer than I thought, but I just sat on him until he wanted to go. Sit. Sit. Sit. I sat as long as I could and by the half-mile pole, Joe [Talamo, aboard Mucho Gusto] stayed outside and I was committed to come to the inside, and from there, from the 3/8ths pole on, it was a horse race, and the other horse flew by us and beat us. But I'm very proud of my horse. Today we had no excuses. Today he was second best. I'm very happy and very proud of him.” -Jose Ortiz, rider of Tacitus

“He's trying. They're tough races we're competing in. He ran a great race. We had reason to jump up at the end and root for him. Take nothing away from the winner. He just breezed by us. We'll go on from here. Not sure where, but we'll find a spot.”

“He ran very, very well. He finished strong to be fourth. We're proud of him and we look forward to next year with him. We think he's going to be a really nice 4-year-old. He's always trained well and he's a really nice horse. He ran well today. Obviously, we wanted him to run a little but he ran very well.”

A paid crowd of 48,213 witnessed Code of Honor's victory under bright blue skies with the temperature staying comfortable in the low seventies. For the first time, fans nationwide watched the Runhappy Travers on the FOX Broadcast Network as part of a special one-hour telecast.