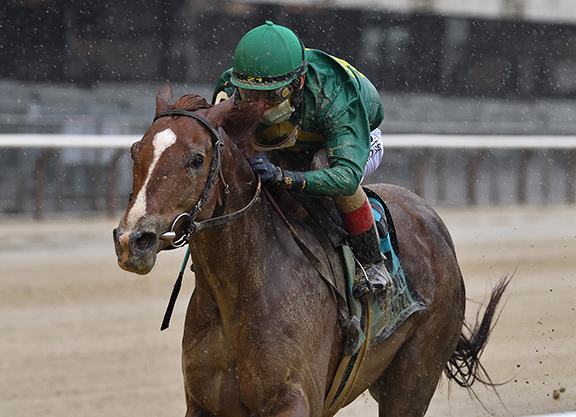 W S Farish's $2.55-million earner Code of Honor (Noble Mission {GB}) appears the one to beat among an overflow field of dirt routers signed on for Friday's GI Clark S. at Churchill Downs. Last year's finalist for champion 3-year-old kicked off 2020 with a win in the GIII Westchester S. in the Belmont mud June 6, and was third in the GI Runhappy Metropolitan H. July 4. Fourth to Improbable (City Zip) and By My Standards (Goldencents) in Saratoga's GI Whitney S. Aug. 1, he was most recently second to GI Big Ass Fans Breeders' Cup Dirt Mile fourth Complexity (Maclean's Music) in the GII Kelso H. around a one-turn mile at Big Sandy Oct. 3.

“He's just been a victim of circumstances with the COVID situation,” Hall of Fame trainer Shug McGaughey said of the colt's season. “I would've liked him to run him in the Westchester which would've been the start of the Belmont Meet in the spring. I would've spaced the races out that way. That didn't' work out so we couldn't run until June 6 in the Westchester. He won that and I really had in my mind I wasn't going to run him back until the Whitney. He's run a lot better with his races spaced… All in all, it was sort of just a messed up year. Now he's gotten his space and he's run good over this Churchill track.”

Code of Honor was moved up from third to second in last year's controversial GI Kentucky Derby.

The aforementioned By My Standards, another 2019 Derby alum, was second to top older runner Tom's d'Etat (Smart Strike) in the track-and-trip GII Stephen Foster H. June 27 before the Whitney, and returned to Louisville to annex the GII Alysheba S. Sept. 4 over Owendale (Into Mischief). He could only manage eighth against a tough bunch in the GI Breeders' Cup Classic Nov. 7, but sports a 5-3-2-0 record going this distance and figures to be right there if he can work out a clean trip from the 12 hole.

Owendale was second in last year's Clark and most recently fifth behind stablemate Knicks Go (Paynter) in the Dirt Mile. Mr Freeze (To Honor And Serve), third in the 2019 Clark, bested four of these foes in Keeneland's GII Hagyard Fayette S. Oct. 10 before checking in sixth in the Dirt Mile.

This story was posted in Shared News and tagged By My Standards, Churchill Downs, Clark S., Code of Honor.