Code of Honor Confirmed for BC Classic 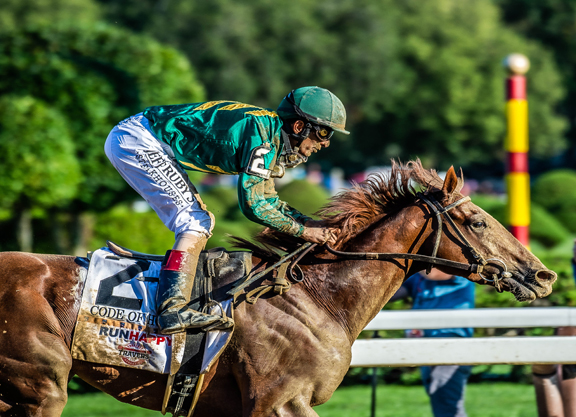 Dual Grade I winner Code of Honor (Noble Mission) will make his next start in the GI Breeders' Cup Classic at Santa Anita next month, his trainer Shug McGaughey confirmed Wednesday morning. The story was originally reported by the Daily Racing Form.

“I always sort of hedged on going out there,” McGaughey said. “I think he is a different horse than I was talking about before the Travers and his race here the other day [in the GI Jockey Club Gold Cup]. The other thing is, he seemed to come out of the Jockey Club Gold Cup really well. I think it is a great opportunity to go out there. These horses are made to run and if he is doing all the right things, we will go out there and run him.”

Promoted to second via DQ in the GI Kentucky Derby, Code of Honor was given a brief freshening and returned a winner in Belmont's GIII Dwyer S. July 6. Rallying strongly for a decisive score in the GI Runhappy Travers S. next out Aug. 24, the chestnut came up a nose short on the line in Saturday's JC Gold Cup after a lengthy stretch battle with Vino Rosso (Curlin), but was promoted to first after his elder was disqualified following a claim of foul by John Velazquez for brushing in the lane.