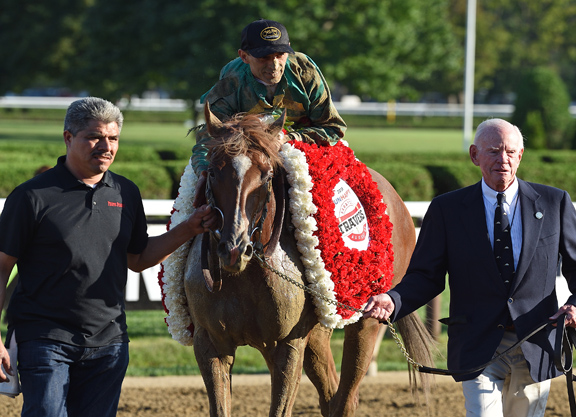 It’s been a year where it sometimes seems there is one trainer, Chad Brown, and then everyone else. On the day of the GI Runhappy Travers S., it was beginning to look like a case of more of the same. Coming into the Travers, Brown had already won four races on the day, including two stakes. But lest we forget, there are still some wise, old pros out there, none sharper and better at what they do than Shug McGaughey. He’s done so much in his Hall of Fame career, and yesterday’s win in the Travers with Code of Honor (Noble Mission {GB}) certainly ranks up there as one of his greatest achievements.

Code of Honor was obviously meant to be a good horse. He broke his maiden as a first-time-starter last year at Saratoga, won the GII Fountain of Youth and crossed the wire third in the GI Kentucky Derby before being placed second through disqualification. Yet, there was something about him that always suggested we had seen nothing close to his best. You probably thought that, the Farish/Lane’s End family thought that and, obviously, so did McGaughey. He knew what he had to do: find a way to get the horse to fulfill his promise.

That may sound easy, but it’s not. Horses have minds of their own; some develop, some don’t and many become the first-round draft pick who is cut three years into their careers.

So, when Code of Honor officially finished second in the Derby, many trainers would have plowed ahead with the remaining Triple Crown races. Who knows? Code of Honor possibly could have won the GI Preakness or GI Belmont, but McGaughey knew exactly what the right thing to do for his horse was and that was to let him develop.

After the Derby, he didn’t show up for nine weeks and came back with a 3 1/4-length win in the GIII Dwyer. That’s hardly a career-making race, but it was exactly what Code of Honor needed to take the next step.

“I think it showed a little bit of his maturity and where he’s going,” McGaughey said following the Dwyer. “Physically, I think he’s bigger, and I think in the Derby he was still a mentally immature horse.”

The next logical step would have been either the GI Haskell or the GII Jim Dandy, but McGaughey passed both. He had his eye on one prize, the Travers, and he was going to do use every bit of knowledge he had compiled during the 40 years he had been training to get the horse to the starting gate on Aug. 24 in peak condition.

“He was a little bit of Jekyll and Hyde horse and we wanted him to put it all together,” the trainer said after the Travers. “And he put it all together today. He’s been training really well and his Dwyer was a really good race, so we thought we were going to see what we just saw.”

What we got was a horse who showed he was both talented and professional. Sitting ninth early under John Velazquez, he started to roll entering the far turn and, despite going five wide on the turn, motored by a couple of good horses in Tacitus (Tapit) and Mucho Gusto (Mucho Macho Man) in the stretch to draw away and win by three.

“He put his mind on running today,” Velazquez said. “When I put him out in the clear, he responded right away. We’ve been looking for this kind of performance for a long time. He’s a late foal (May), and didn’t always know what to do even though he ran some big races. He really put one together today.”

What exactly did McGaughey do? Show patience? Let the horse grow up a little bit? Sharpen him up in the mornings? He did have a bullet four-furlong workout on the Saratoga training track Aug. 4, the type of work you rarely see from a Shug horse. Was it all of the above or something else? Honestly, it doesn’t really matter. The answer is that the trainer knew which buttons to push.

After he’s done celebrating, McGaughey might want to go commiserate with a trainer who is his equal and peer, fellow Hall of Famer Bill Mott. He must be tearing his hair out over the frustrations he’s had to endure this year with the talented but enigmatic Tacitus. Sent off the 2-1 favorite Saturday, he finished second for the third straight time. He most likely would have won the Belmont, but jockey Jose Ortiz made a rare mistake when he had him wide throughout on a track that was clearly favoring the inside. He might have won the Jim Dandy, but he stumbled at the start. Mott dug into his bag of tricks Saturday and equipped the horse with blinkers. What he got was a horse who completely deviated from his normal running style. A colt that had always come from the back of the pack, Tacitus broke so sharply that he wound up on the lead. Ortiz tried to get him to settle and allowed Mucho Gusto to take control. Tacitus kept battling on, but he never seemed comfortable in the race while seeming out of sorts dueling for the lead.

Meanwhile, though he failed to hit the board in the Travers, even though he had two starters, Brown had another stellar afternoon. He won the GII Ballston Spa with Significant Form (Creative Cause) and the GI Sword Dancer with Annals of Time (Temple City). The Sword Dancer win was particularly impressive as Annals of Time won his first stakes race since the GI Hollywood Derby in 2016 and had nearly two years off after winning an allowance at Belmont in 2017. Brown is most often associated with Bobby Frankel, for whom he served as an assistant trainer. But few remember that he also once worked for McGaughey, and there’s little doubt he learned a thing or two while studying under McGaughey.

Based on the fact he’s the only 3-year-old male to have won two Grade I’s this year and that he did cross the wire first in the Derby, Maximum Security (New Year’s Day) is still the leader of the division. But he passed the Travers because trainer Jason Servis did not like the way he was training up for the race and will now point for the GI Pennsylvania Derby. But , considering what Servis had to say this week, there can be no guarantees his colt will make the big race at Parx.

Both would be tall orders, especially if a healthy Maximum Security shows up for those two races. But Code of Honor has finally found himself and he is trained by one of the best in the business. The public didn’t show a lot of confidence in him yesterday, letting him go off at 4-1. The players won’t make that mistake again. From here on in, doubt this horse at your own risk.