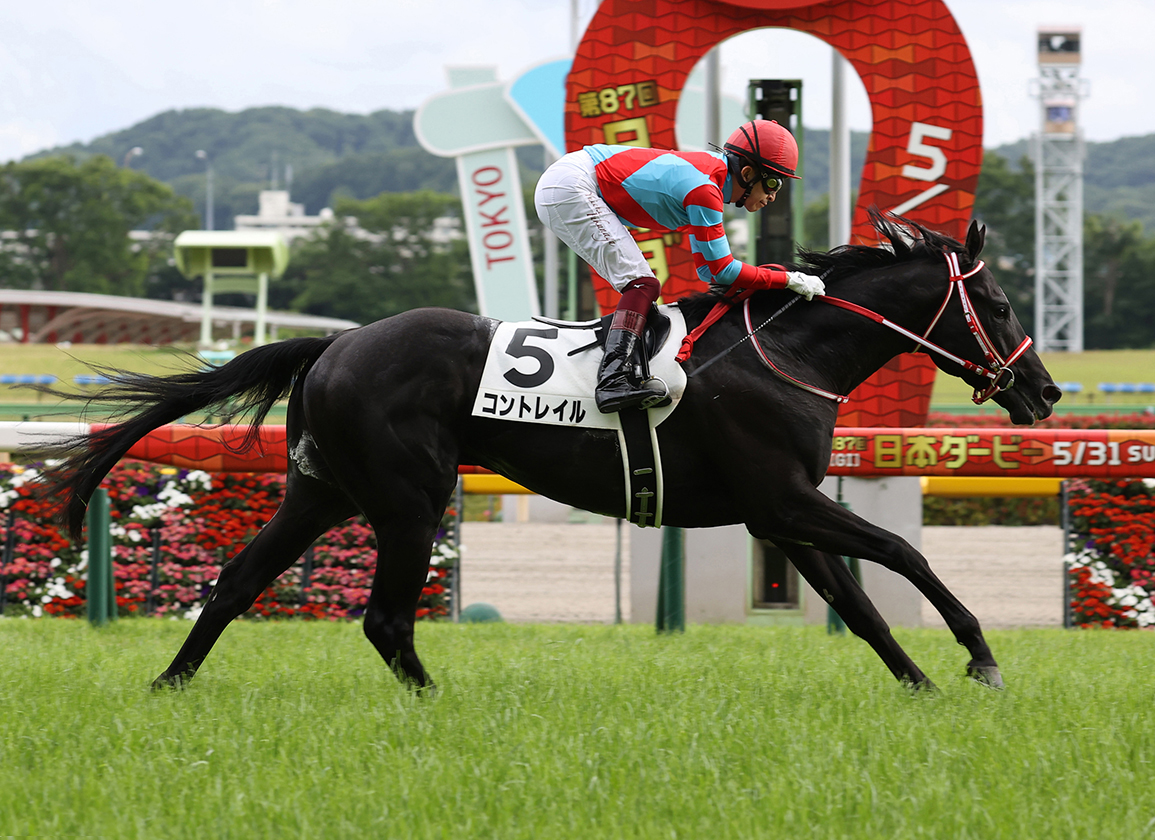 With the possible exceptions of Loves Only You (Jpn) (Deep Impact {Jpn}), currently training in America towards the GI Breeders' Cup Filly & Mare Turf, and the G1 Japan Cup-bound Shahryar (Jpn) (Deep Impact {Jpn}), this year's G1 Tokyo Yushun hero, Sunday's G1 Tenno Sho (Autumn) at Tokyo has attracted the creme of the crop in Japan, including Classic winners from each of the last three seasons.

Contrail (Jpn) (Deep Impact {Jpn}) commences a two-race farewell tour back where he celebrated one of his finest hours in the 2020 Tokyo Yushun. The son of US-bred Rhodochrosite (Unbridled's Song) successfully completed his Triple Crown bid in last year's G1 Kikuka Sho–if only just–then was just not quite good enough in the Japan Cup, finishing a close second to former Horse of the Year Almond Eye (Jpn) (Lord Kanaloa {Jpn}). Contrail has just the one start this season, where he squared off with a handful of Sunday's rivals in the G1 Osaka Hai in early April. Worse than midfield, he kept on fairly in the straight to be third to then-unbeaten Lei Papale (Jpn) (Deep Impact {Jpn}), but would have been inconvenienced by a rain-affected course.

“I had wanted to scratch,” admitted trainer Yoshito Yahagi. Once declared, horses may not be scratched after accepting. “He came out of the race poorly as well. I think he's back to his best. This week, he had a light workout just to fine-tune his breathing. His movement was excellent and the work brought out his suppleness. He's bigger than he was in the spring and I think the way he moves has improved as well.”

All things equal, Contrail will make his final career appearance in the Japan Cup Nov. 28.

4c CONTRAIL peeling off an effortless 12.1 last 1F up the Ritto slope this morning, final fast ahead of the G1 2000m Tenno Sho on Sunday

The easy surface can also be held responsible for the performance of Gran Alegria (Jpn) (Deep Impact {Jpn}) in the Osaka Hai, as she was unable to reproduce her typically blinding turn of foot and settled for fourth. The daughter of Breeders' Cup Juvenile Fillies' Turf victress Tapitsfly (Tapit), who scooped the G1 Japanese 1000 Guineas over 1600 metres in 2019, makes her first appearance since a troubled runner-up effort to Danon Kingly (Jpn) (Deep Impact {Jpn}) in the 1600-metre G1 Yasuda Kinen in June. Connections are hoping that quicker underfoot conditions will help her see out Sunday's trip.

“I've had Tenno Sho (Autumn) winners before and they all had good stamina,” said trainer Kazuo Fujisawa, who indicated that the mare had undergone a minor throat operation over the summer. “This is the first strong miler I'm fielding in the race. She has speed, but I'd like to see if she has the speed to conquer the Tokyo 2000 metres.”

Gran Alegria is the final Tenno Sho starter for her trainer, who turned 70 last month and is on the brink of retirement.

The Fujisawa-trained Symboli Kris S (Kris S.) was the last 3-year-old to defeat his elders in this event back in 2002, and G1 Satsuki Sho winner Efforia (Jpn) (Epiphaneia {Jpn}) will try to snap that streak this year. The Carrot Farm colourbearer was running his record to four-from-four in the Guineas, where he had recent Kikuka Sho victor Titleholder (Jpn) (Duramente {Jpn}) three lengths adrift in second. He weaved his way through traffic when last seen in the Derby at this venue May 30 and came to win the race, only to drop a heartbreaking decision to the aforementioned Shahryar.