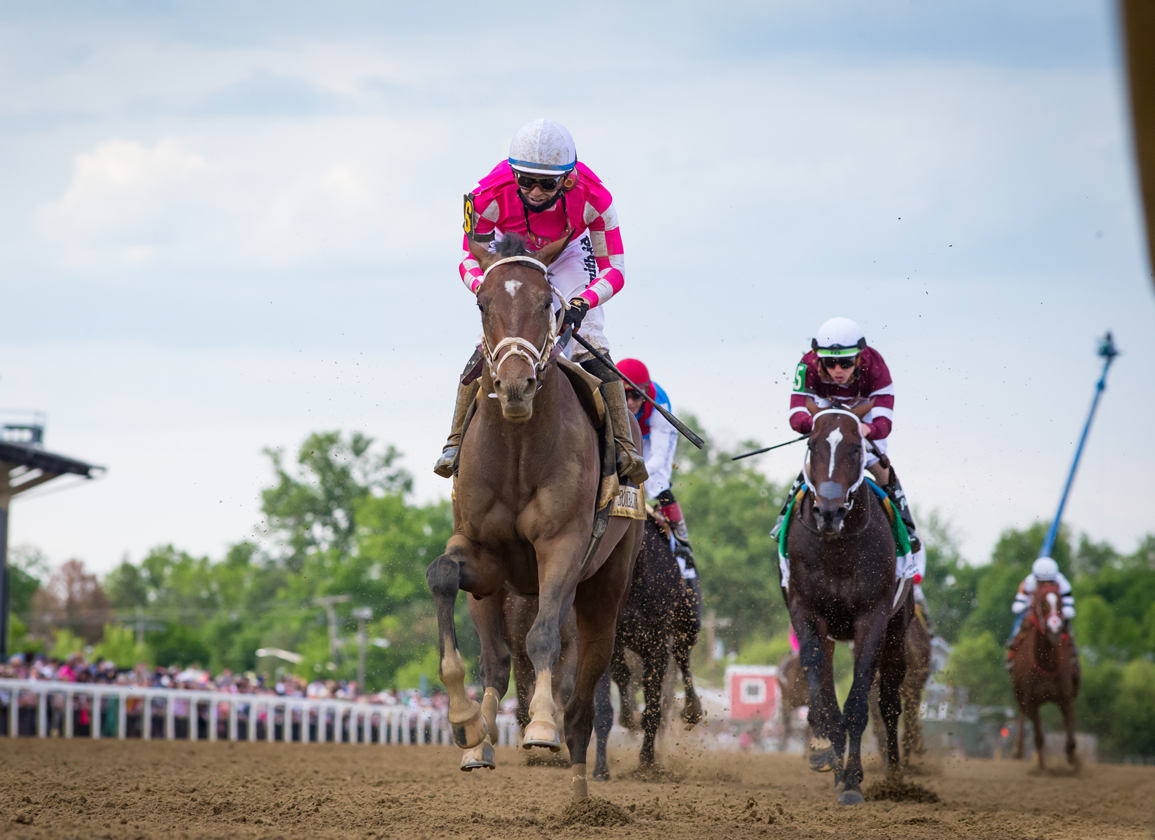 Rombauer (Twirling Candy–Cashmere, by Cowboy Cal), who upset Midnight Bourbon (Tiznow) and GI Kentucky Derby first past the post Medina Spirit (Protonico) in last year's GI Preakness S., has been retired from racing, according to his owner John Fradkin, who bred and raced the colt in partnership with his wife Diane.

Trained by Michael McCarthy, Rombauer was an eye-catching maiden winner at first asking over the Del Mar turf course and finished runner-up when trying dirt for the first time in the GI American Pharoah S. before a creditable fifth behind champion Essential Quality (Tapit) in the 2020 GI Breeders' Cup Juvenile. He displayed further versatility in annexing the El Camino Real Derby on the Tapeta at Golden Gate in his sophomore debut last February and was third to Essential Quality in the GII Toyota Blue Grass S. in April ahead of his fast-finishing, 3 1/2-length success at Old Hilltop. He was last seen reporting home a distant third in the GI Belmont S.

Rombauer emerged from the Belmont with some filling in his ankles and had lightened up, prompting a layoff. He returned to serious training this past October and recorded five workouts, but was beginning to carry pressure once again in his ankles. On Dec. 31, the first day of training at Santa Anita following three days of heavy rain, Rombauer “took a bad step” when galloping and connections elected to stop on him.

“We are very disappointed,” Fradkin said in an email. “We thought we were going to Dubai in March [for the G1 Dubai World Cup] and would make a good showing, and then we were hoping to run him in the [GI] Pacific Classic later in the year. We were also looking forward to trying him back on turf. I actually think turf was his best surface and he could have been one of the better turf horses in the country.

“That's the horseracing business for you,” he continued. “The highs are very high and the lows are very low, and both the good news and the bad news often come as surprises. Winning the Preakness was of course a very high high, as I did not expect to win that day. This is a pretty big low, but it's not a tragic one.”

One of seven Grade I winners for his sire, Rombauer is bred on the wildly successful cross of Candy Ride over Storm Cat-line mares responsible for the likes of Horse of the Year and top freshman sire Gun Runner, among others. A half-brother to SP Cono (Lucky Pulpit), Rombauer is out of a daughter of Ultrafleet (Afleet), purchased by Fradkin for $10,500 at Keeneland September in 1993 and who went on to produce MGSW Calfornia Flag (Avenue of Flags) as well as the tremendous MGSW producer Cambiocorsa (Avenue of Flags), dam of GSWs Moulin de Mougin (Curlin) and Schiaparelli (Ghostzapper); SW & GSP Bronson (Medaglia d'Oro); MSW Alexis Tangier (Tiznow); and GISP Vionnet (Street Sense), dam of the late MG1SW champion Roaring Lion (Kitten's Joy).

Rombauer retires with a record of 3-1-2 from eight starts and earnings of $1,040,500. No stud plans were immediately announced.