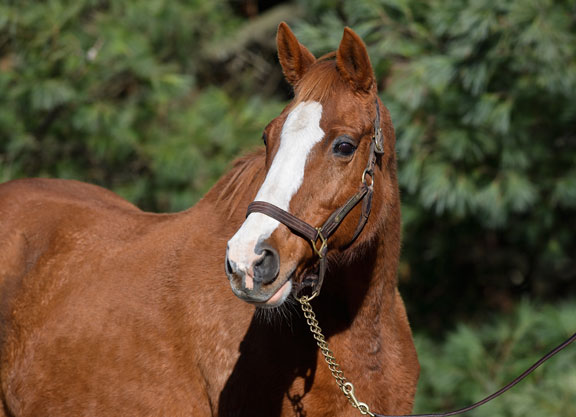 Balanchine (Storm Bird-Morning Devotion, by Affirmed), who became the first Classic winner for Godolphin and Frankie Dettori when winning the 1994 G1 Epsom Oaks, has died aged 30. The chestnut mare had been pensioned from breeding duties for the past seven years and lived out her days at Sheikh Mohammed's Gainsborough Farm in Versailles, Kentucky.

Bred by Robert Sangster's Swettenham Stud, Balanchine was campaigned by Sangster during a 2-year-old campaign in which she won her two starts by a combined 10 lengths. Purchased thereafter by Sheikh Mohammed's elder brother Sheikh Maktoum, Balanchine was among the first cohort of horses wintered in Dubai by the Maktoum family, and her success in the season that followed spawned a programme within the operation that is still in place today. Beaten a short head in the G1 1000 Guineas, with the influential broodmare Coup De Genie a neck back in third, Balanchine regrouped to win the Oaks next out by 2 1/2 lengths over Deep Impact (Jpn)'s dam Wind In Her Hair (Ire) (Alzao), with Frankie Dettori aboard in the Godolphin blue. Balanchine's most memorable win, however, came three weeks later when she shipped to Ireland to take on the colts in the G1 Irish Derby. Traveling third on the inside early back in the Sheikh Maktoum silks, Balanchine moved into the two path and up to take the lead shortly before they straightened, getting first run on Sheikh Mohammed's favoured King's Theatre (Ire). That G1 Racing Post Trophy winner, who went on to beat older horses in the G1 King George VI and Queen Elizabeth S. next out, proved no match for the filly Balanchine, who drew clear to win by 4 1/2 lengths. That proved Balanchine's final win; she ran three times at four, her best finish being a second behind the G1 Prix de l'Arc de Triomphe winner Carnegie (Ire) (Sadler's Wells) in the G3 Prix Foy.

Frankie Dettori, who was just 23 at the time that he won two Classics aboard Balanchine, reflected on his partnership with the mare in a 2019 interview with Horse Racing Ireland.

“I was over the moon after I'd won my first Classic on her at Epsom, and I thought the next step would be the Irish Oaks,” Dettori said. “But Sheikh Maktoum and Sheikh Mohammed were never short of a challenge and they decided to race against the colts in the Irish Derby. I thought 'God, this may be a step too far.' Obviously, I was proven wrong, because she won.

“It was my only Irish Derby win, and I was only 23, so I was ecstatic and delighted, and it was a massive feat for a filly. She was a one-off. It was a bold call to make a run against the colts, and that was, I guess, the stepping stone for what Godolphin is now. She was the start.”