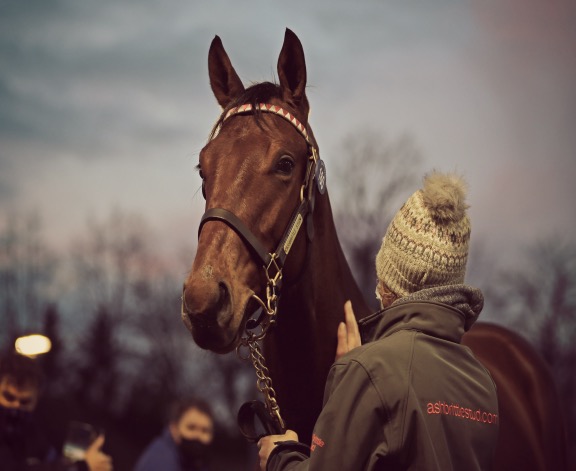 NEWMARKET, UK—Sending an Oaks winner to a Derby winner is no guarantee of success but it's a great place to start and it is a recipe which has worked in the recent past for Classic winners Australia (GB) and Sixties Icon (GB). Those connected with the top lot of the Tattersalls December Yearling Sale will be hoping for similar glory in two years' time for the Sea The Stars (Ire) colt out of Talent (GB) (New Approach {GB}), who was offered by his breeders James Rowsell and Mark Dixon through Rowsell's Ashbrittle Stud and bought by Anthony Stroud for 300,000gns.

“He looks like he will need a bit of time, but he is by a Derby winner out of an Oaks winner,” said Stroud of lot 160. “I saw him as a foal and he has been progressing well.”

Rowsell and Dixon raced the 2013 winner Talent as well as her first foal, Ambition (GB) (Dubawi {Ire}), who was trained in France by Xavier Thomas-Deameaulte to win the G2 Prix Corrida.

As is so often the case, a yearling who has missed an earlier sale date through a minor setback can prove a smash hit at the December Sale, and so it proved with a number of the day's leading lots. Talent's son missed his slot in October Book 1 with a haematoma, while Kirsten Rausing's Sea The Stars (Ire) half-sister to G2 York S. Winner Shine So Bright (GB) (Oasis Dream {GB}) missed hers through a soft tissue injury a few weeks prior to the sale. Brought to the December Sale as lot 7 through the Castlebridge Consignment, the filly had plenty to recommend her as a member of Lanwades Stud's banner family. With dual G1 Champion S heroine Alborada (GB) (Alzao) as her great grandam, the grey's first four dams are all stakes winners and producers, and she was bought by a partnership representing two major breeders in Ireland and America for 260,000gns.

“We had good yearling sales so we wanted to reinvest, and she is by a stallion that we love and from a wonderful family which has been very well managed by Kirsten Rausing. There are a large number of fillies from the family breeding and they are going to good stallions. It's not often that one comes up for sale but Coolmore has a branch, Juddmonte has a branch and now we have one too.”

McCalmont added that the filly is likely to go into training with John Gosden, who will also train the day's top lot.

Sea The Stars accounted for three of the top five yearlings of the day, with the third making a quick reappearance after being sold for 135,000gns at October Book 1. The Watership Down Stud-bred Sea The Stars colt out of Crysdal (GB) (Dalakhani {Ire}) (lot 31) was this time consigned by New England Stud and knocked down for 125,000gns to Charlie Gordon-Watson.

As has been the hallmark of the yearling sales at Tattersalls in a year in which many vendors understandably feared the worst, the figures returned for the final auction of its kind in 2020 were encouraging. From a smaller catalogue, 142 were offered and 122 sold, leading to an improved clearance rate of 86%, compared to 78% last year. The aggregate was down slightly at 3,986,300gns and the median dipped by 20% to 20,000gns but the average was up by 3% to 32,675gns.

There was a major update this season for Knockatrina House's Starspangledbanner (Aus) filly out of Plying (Hard Spun), who was pinhooked from Goffs in February for €40,000, seven months before her half-sister Alcohol Free (Ire) won the G1 Cheveley Park S. Withdrawn from the Goffs Orby Sale in October, the filly (lot 119) duly made 130,000gns this time around when bought by Creighton Schwartz Bloodstock.

Knockatrina House's Canice Farrell said, “We were lucky enough that Alcohol Free came along. This filly was entered in an earlier sale, but had an over-reach. She needed the time.”

The filly's breeder Jossestown Farm bought the three-time winner Plying at the Goffs November Sale of 2018 for €21,000, just over half the amount her weanling daughter by No Nay Never fetched at the same sale when bought by Jeff Smith's Littleton Stud. The page has continued to be enhanced since then, with Plying's son Alexander James (Ire) (Camelot {GB}) having won the listed Prix Le Fabuleux last season. The mare's colt foal by Dandy Man (Ire) is catalogued to sell at the Goffs Foal Sale, which has been postponed until December.

Daniel Creighton of Creighton Schwartz Bloodstock added, “Her sister has done well his year and she is by a popular sire. Let's hope it all adds up to her being a good filly on the track and eventually a good broodmare, too. She is a lovely big filly and has a lot of quality. She is for a new client and will go into pre-training with my brother.”

Alcohol Free's trainer Andrew Balding was the busiest purchaser of the day, signing for six yearlings, including Hillwood Stud's son of Lope De Vega (Ire) at 130,000gns. Offered as lot 154, the colt is the second foal of the French listed winner Stone Roses (Fr) (Rip Van Winkle {Ire}), whose three foals to date are all by the Ballylinch Stud sire. The 8-year-old mare is a half-sister to fellow listed winner Straight Right (Fr) (Siyouni {Fr}), who was trained by Balding for King Power Racing.

On a day when six of the top nine yearlings sold were by Derby winners, the seventh to return a six-figure price tag was Mount Coote Stud's New Approach (Ire) colt (lot 77) from the family of that same stallion's aforementioned Oaks winner Talent (GB). He will be making his way back to Ireland after being bought by Patrick Cooper for 105,000gns on behalf of Alpha Racing.

“He 's going to be trained by Jessica Harrington,” said the agent. “He's a lovely colt, a 3-year-old type.”

Luke Lillingston, who bred the son of La Superba (Ire) (Medicean {GB}) in partnership with Talent's co-breeder Mark Dixon, said, “He came here for Book 2 and he was showing really well the first day but then he spiked a temperature and we had to withdraw him. He is a horse that was really sick. Thanks have to go to Damian Flynn and Emma Foley who have looked after him in the weeks since then.”

He added, “Book 2 was so strong and we were disappointed not to be part of it with this horse, but the market has revalued him again today. He is going to Jessie and that is really the cherry on the icing on the cake.”