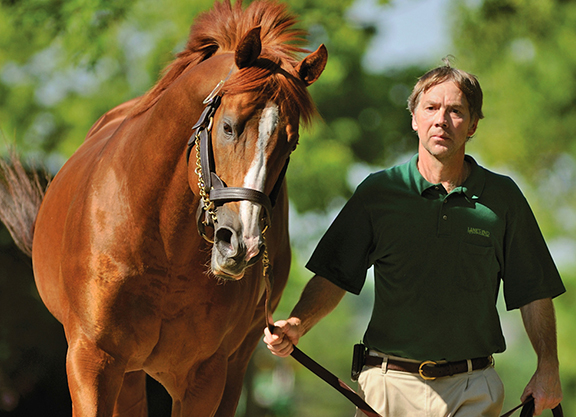 Grade I winner and prominent sire City Zip (Carson City–Baby Zip, by Relaunch) was euthanized Tuesday at age 19 due to chronic foot issues. He will be buried in the stallion cemetery at Lane's End Farm, where he has been a member of the stud roster since 2005.

Bred by Adena Springs, City Zip was a $9,000 Keeneland January yearling purchase and RNA'd for $80,000 the following year at the OBS February 2-year-old sale. He was campaigned throughout his career by Charles Thompson, Becky Thomas, Carl Bowling, Lewis Lakin and trainer Linda Rice.

City Zip had a brilliant juvenile campaign in 2000, scoring his first black-type victory in the GIII Tremont S. at Belmont and following that with a clean sweep of the Saratoga 2-year-old stakes series. Starting with a win in the GII Sanford S., the chestnut took the GII Saratoga Special S. before dead-heating with Yonaguska in the GI Hopeful S., a race in which eventual champion juvenile colt Macho Uno finished 7 1/4 lengths back in third. Returning to Belmont for the GI Futurity S., he bested Burning Roma by nose, but was disqualified and place second for interference in deep stretch.

Third in the 2001 GI Fountain of Youth S., City Zip went on another win streak in the spring of his sophomore season, capturing Pimlico's Hirsch Jacobs S., Monmouth's GIII Jersey Shore Breeders' Cup S. and Saratoga's GII Amsterdam S. Completing the trifecta in both the GI King's Bishop S. and GII Kelso H. that term, he retired in the fall of 2001 after finishing off the board in the GI Breeders' Cup Dirt Mile with a record of 23-9-5-4 and earnings of $818,225.

“Obviously, he was important to me both personally and professionally,” Rice told the TDN after receiving the news Tuesday afternoon. “In 2000, he won all three 2-year-old stakes here at Saratoga, including a dead-heat in the GI Hopeful. He had won the Tremont before we went to Saratoga and won the Futurity when we got back to Belmont, but was DQ'd and I think that might have cost him the 2-year-old championship that year. He was a great racehorse and terrific to train. He turned into a great stallion.”

Rice continued, “Fortunately I was able to see him when I was in Kentucky with Sheila [Rosenblum] to run La Verdad in the [2015] Breeders' Cup [at Keeneland]. That is the last time I saw him and it was kind of emotional for me. It felt like he knew who I was. This is a big loss to the racing industry as a whole.”

Originally retired to Gus Schoenborn's Contemporary Stallions in New York, City Zip moved to Lane's End at the end of 2004, shortly after his Hall of Fame half-brother Ghostzapper (Awesome Again) won that year's GI Breeders' Cup Classic, and proved to be a worthy investment. The chestnut has a total of 1,212 foals from 15 crops and his 13 crops of racing age have earned $78 million with 72 stakes winners, 26 being graded winners.

“City Zip has had many significant achievements at stud and it has been a privilege to stand him at Lane's End,” said Lane's End's Will Farish. “We are very grateful to the members of his stallion syndicate and our breeders for supporting this special horse throughout his career. City Zip's extraordinarily kind disposition and strong spirit endeared him to all, and he will be greatly missed. We want to thank Dr. Scott Morrison of Rood and Riddle Equine Hospital for the diligent and compassionate care that he and his associates provided to City Zip.”

City Zip's former conditioner Rice also trained two of his top progeny in MGISW millionaire Palace, who currently stands at Spendthrift Farm, and GSW and GISP Hot City Girl, who is training towards a summer return at Saratoga after a brief freshening. He is also currently being represented by undefeated 2-year-old colt Blueblood, who took his record to two-for-two in Woodbine's Victoria S. July 8; and the Bob Baffert-trained MGSW Collected, who is three-for-three this season, including a 14-length romp in the GIII Precisionist S. last time June 24.