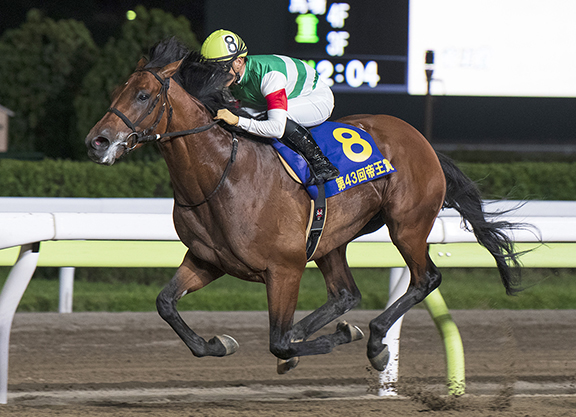 Chrysoberyl is undefeated in eight starts at home, including a narrow defeat of 2017 winner Gold Dream (Jpn) (Gold Allure {Jpn) in this event 12 months ago (see below). Seventh to Maximum Security (New Year's Day) in the US$20-million Saudi Cup in February, he was an intended runner in the G1 Dubai World Cup before that meeting's cancellation and has since defeated the talented Omega Perfume (Jpn) (Swept Overboard) in his last two, including the Listed JBC Classic at Tokyo City Keiba Nov. 3. Omega Perfume misses the Champions Cup in favour of a three-peat attempt in the G1 Toyko Daishoten at month's end.

Like the race favourite, Cafe Pharoah has only tasted defeat once in his career and emerged as the top dirt runner of his generation with victories in the Listed Hyacinth S. in February and the G3 Unicorn S. in June. He struggled when only seventh to Danon Pharaoh (Jpn) (American Pharoah) in the Listed Japan Dirt Derby in July, but resumed with a smart defeat of older rivals in the G3 Sirius S. (1900m) at Chukyo Oct. 3.

Clincher (Jpn) (Deep Sky {Jpn}), who finished well down the field in the 2018 G1 Prix de l'Arc de Triomphe, has been reinvented as a dirt horse and carries the Koji Maeda silks successful aboard Transcend (Jpn) (Wild Rush) in 2010 and 2011. He has a record of 1-4-1 from seven tries on the dirt and exits a comfortable success in the G3 Miyako S. at Hanshin Nov. 8.

Mozu Ascot (Frankel {GB}), winner of the G1 Yasuda Kinen on turf and a G1 February S. on dirt, makes the final start of his career before heading off to stud for 2021.