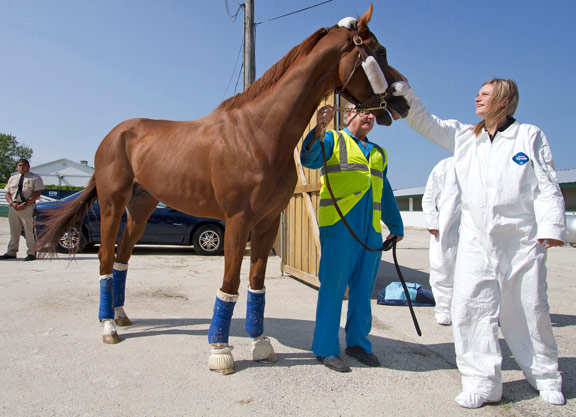 Horse of the Year and dual Classic winner California Chrome (Lucky Pulpit) will likely be out for the remainer of the 2015 season after x-rays showed a cannon bone bruise. The chestnut was second in the GII San Antonio Invitational S. Feb. 7 and runner-up in the G1 Dubai World Cup Mar. 28. California Chrome was originally scheduled to make an appearance in Ascot’s G1 Prince of Wales S., but was withdrawn with a foot abscess. He arrived at Arlington Park last week in preparation for a start in the GI Arlington Million, but will miss that start–and likely the remained of the season–after x-rays showed a cannon bruise. The DAP Racing facebook page released the following statement Sunday: “California Chrome won’t run in the Arlington Million due to cannon bone inflammation. Owner Perry Martin said the condition was found by x-ray late yesterday afternoon.”

This story was posted in Top News and tagged California Chrome.