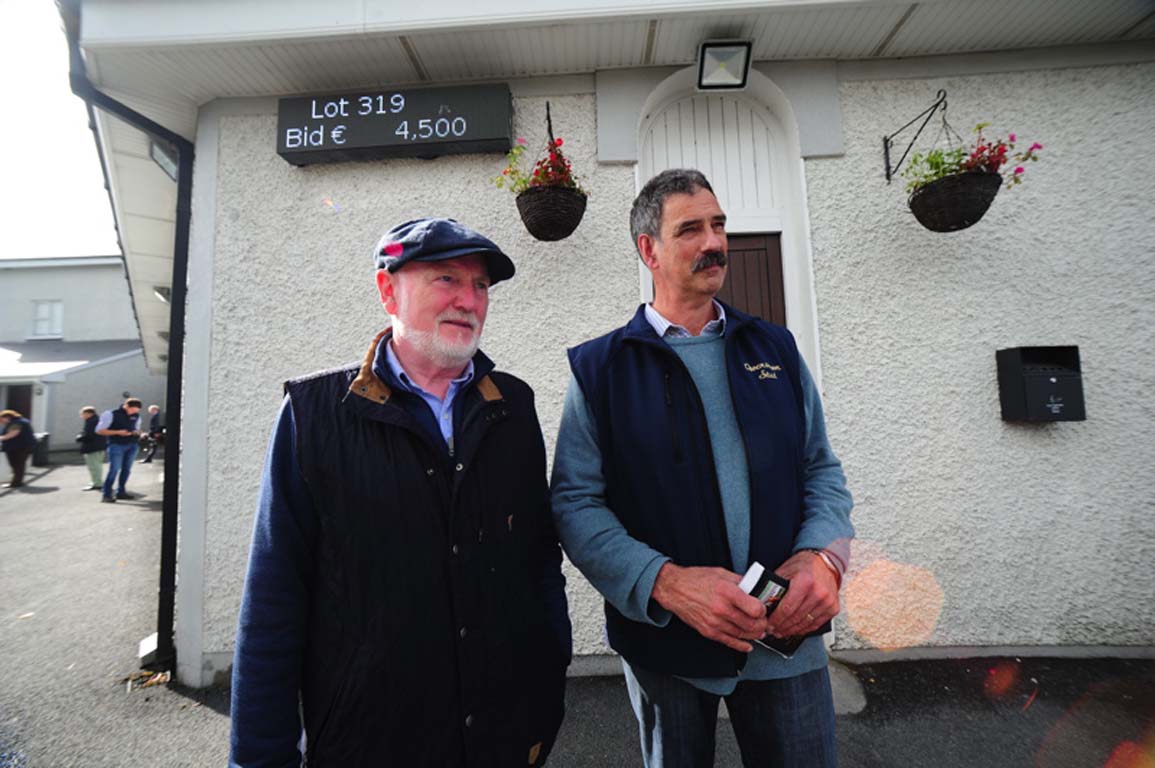 John Tuthill wouldn't be the type to shout from the rooftops about the racetrack successes of the graduates of his Owenstown Stud. But, then again, he doesn't have to–the horses have done the talking themselves.

Tuthill brings a boutique draft of three under the Owenstown Stud banner for the Sept. 28 and 29 Goffs Orby yearling sale, all from families he has nurtured for the better part of 15 years.

Lot 408, a daughter of Dark Angel, is a February-foaled full-sister to Persuasive and a half to the listed-winning and multiple Group 3-placed Tisbutadream (Ire) (Dream Ahead) and Creative Force (Ire) (Dubawi {Ire}), winner of this year's G3 Jersey S. at Royal Ascot for Godolphin.

“She's typical of the family,” Tuthill said. “She has an absolutely sweet nature; I've had quite a lot of the family and it's something about that family, they have a fantastic nature. They give everything they can and yet they're very easy and pleasant to work with. She's an absolute joy to have around.

“It's not a family of great big specimens. When you think of Creative Force, he isn't very big. She's a little bigger than him, but it's the attitude that they have. And she's nicely proportioned and correct.”

All of Choose Me's seven prior foals have sold as yearlings, and five of those were at Orby. Creative Force's €400,000 pricetag when Godolphin bought out a foal share agreement was the most expensive. Persuasive cost €180,000 at Kildare Paddocks, and Tisbutadream €100,000. Choose Me's current 2-year-old, the as-yet unraced Mr Zero (Ire) (Dark Angel {Ire}), was bought by SackvilleDonald for 100,000gns, and that firm has been great supporters of the mare: they purchased Choose Me's 2016 son of Slade Power (Ire), Songkran (Ire), for €100,000 from Orby and he won six times. They also purchased Tisbutadream from the 2017 Goffs London Sale for £400,000 for King Power Racing off a third-place finish in the G3 Princess Elizabeth S.

It is hard to deny that Choose Me has been an excellent producer; all six of her foals to race have won at least once, with two having none short of six wins on their CVs.

Choose Me was bred by Owenstown out of the Juddmonte-bred mare Hecuba (GB) (Hector Protector). Put through the Tattersalls December sale after winning once for trainer Barry Hills, Hecuba was picked up by McKeever St Lawrence for 27,000gns. Put in foal to Vettori (Ire), Hecuba was returned to Park Paddocks a year later and scooped up by Tuthill and his aunt, the late Averil Whitehead, for 48,000gns from the Kildaragh Stud consignment.

“She has been fantastic,” Tuthill said. “She's produced stakes horses–Choose Me is her best one so far-and she's still producing.”

Choose Me was Hecuba's second foal, and Tuthill explained how she came to stay under Owenstown's care.

“Choose Me was in the Fairyhouse sale and was injured and had to be withdrawn,” he said. “My aunt, Mrs. Whitehead, said she would race her with a 'for sale' sign around her neck. She was named Choose Me-she's by Choisir, which means to choose, but also if somebody came into Kevin Prendergast's yard looking to buy a horse, the name on the door would say, 'Choose Me.'”

Choose Me soon proved herself valuable enough to Owenstown that the 'for sale' sign was removed from her neck. She broke her maiden at two, won the Listed Fairy Bridge S. at three and won four times from 28 starts.

“She went up through the grades and proved herself to be very good indeed, and so we kept her and were happy to do so,” Tuthill said. “She's been great, she's produced Tisbutadream, Creative Force, Persuasive; they've all been good horses. Creative Force is running in Group 1s and just needs to get his head in front. He's not big in stature but no one has told him he's a small horse. When he has the tack on he's every bit as big as anybody else. He has a great attitude.”

The Dark Angel yearling filly is, sadly, the last foal out of Choose Me, who died last year. Tuthill is clearly reluctant to let her go, but such is business, especially in the wake of a difficult 2020 on account of the Covid-19 pandemic.

“I'd love to keep her, but last year's yearling sales were not great, to put it mildly,” he said. “So I'm not in the position of being able to hold on to her. So unfortunately, sadly, I have to sell her even though she's the last of the Choose Me progeny.”

Owenstown still retains a few links to the family, however, with Choose Me's sisters Aphrodite's Angel (Ire) (Dark Angel {Ire}) and Spirit of Cuba (Ire) (Invincible Spirit {Ire}) in the broodmare band. Hecuba has a colt foal by Starspangledbanner (Aus) and is back in foal to Mehmas.

Aphrodite's Angel's first foal, a grey colt by Kodiac, is in the Orby as lot 355, while Spirit of Cuba's sixth foal, an Iffraaj (GB) colt, is part of Owenstown's three-horse draft for Book 2 of the Tattersalls October Yearling Sale.

“Aphrodite's Angel has a very nice Kodiac colt,” Tuthill said. “He's a grey, he's strong, he's a good mover and straightforward. He's another one you'd like to be associated with.”

Owenstown's Orby consignment is completed by lot 169, a colt by Roaring Lion who is the third foal out of Owenstown's homebred G3 Ballyogan S. winner Penny Pepper (Ire) (Fast Company {Ire}), who is a half-sister to Art Power. Like Choose Me, Penny Pepper descends from a Juddmonte family, her second dam Shadow Casting (GB) (Warning {GB}) having been a winner for Khalid Abdullah and Barry Hills. Tuthill bred Evening Time (Ire) (Keltos {Fr}) from Shadow Casting, and running under the ownership of Whitehead she won the 2006 Listed Flame Of Tara S. and the 2007 Listed Sweet Mimosa S. for Kevin Prendergast. That was just a year before Choose Me came onto the scene.

“Between Evening Time and Choose Me, those two fillies kept Mrs. Whitehead alive for another few years,” Tuthill said. “She was in the final years of her life and they gave her such excitement and such reason to keep going. It was great that even as she was becoming more frail she still had something to shout for. I can remember her being cautioned in hospital for making too much noise shouting at the television. She had a lot of fun with them and they've both been great producers.”

“He's got great presence–there's plenty of horse there,” he said. “He's very nice; a big, powerful colt. He's everything you'd hope to produce. He really has a look that says, 'come and look at me, I'm going to be something special.' It was such a shame that Roaring Lion himself had such a short life, because if the rest of his progeny are anything like my lad, he would have made such a mark on the pedigrees.”

Mares like Choose Me and Evening Time are key to shaping the modern history of Owenstown, which was established by Englishman Major Dickson in Maynooth, Co. Kildare shortly after the turn of the 20th century. Owenstown and Dickson's neighboring Moygaddy Stud were managed by Tuthill's grandfather Frank Tuthill. When Major Dickson opted to return to England in the midst of the political unrest in Ireland, he offered Frank Tuthill the opportunity to buy his studs. Tuthill could only afford one and chose Owenstown, and he soon embarked on a highly successful run as a breeder in his own right. The most famous Thoroughbred produced at Owenstown under Frank Tuthill's tutelage was the Oaks and 1000 Guineas winner Musidora, while other Classic winners reared there during that time period included Indiana, Humble Duty and Cavan. Frank Tuthill later handed Owenstown off to his niece, Averil Whitehead, who bred the likes of Indian Ridge-a dual Royal Ascot winner and influential sire-and G3 Rockfel S. winner Negligent in the early days of her Owenstown reign. Whitehead remained keenly involved in the running of the stud until her death in 2010.

“Mrs. Whitehead handed it over to me 25 years ago and I ran it very much with her until she died and I've continued on myself,” Tuthill said. “My core business is breeding and selling yearlings, but I also board mares, either long term, permanent boarders or some short term ones through the breeding season. We would foal about 50 mares and we'd have some mares that would come in to visit Irish stallions.”

In addition to his Orby and Tattersalls Book 2 drafts, Tuthill has yearlings to sell at this week's Tattersalls Ireland September Yearling Sale as well as the Goffs Sportsman's Sale and Tattersalls October Book 3. He said he is hoping to go some way toward healing the damage done during last year's pandemic-ravaged season.

“I'm expecting the market to be stronger than last year,” he said. “My perception is that people want to shake off the horrors of Covid and I think there is an appetite to buy some horses and get racing again and try to get the normality and the enjoyment out of the sport. I hope that positivity is reflected in good yearling prices and certainly I'm hoping I have a good year to in some way make up for last year.”

With a select group of yearlings by commercial sires from current top-class female families, there is every reason to believe the shrewdest buyers should be shopping at Owenstown Stud.