Cheering for Hope from Houston 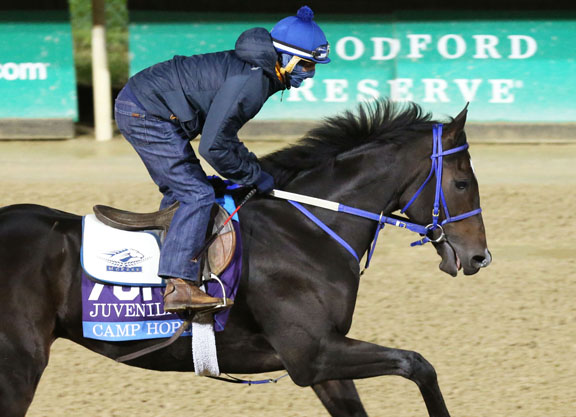 Nearly a thousand miles from Keeneland Race Course, a watch party in Houston, Texas is sure to be cheering just as emphatically as if they were in the grandstand.

Residents of Camp Hope, a facility that provides support and mentoring to combat veterans suffering from the effects of Post-Traumatic Stress, will tune in on Friday to watch a juvenile colt named after the residential program. If Camp Hope (Summer Front) ends up in the winner's circle for the GI Breeders' Cup Juvenile, his earnings will go back to the facility he represents.

Camp Hope heads into the Breeders' Cup coming off just one career start, but it's a flashy four-length winning one on Oct. 25 at Churchill Downs. The son of Summer Front is campaigned by Walking L Thoroughbreds, a company owned by Scott Leeds and his wife Dana.

Leeds stopped in at the Camp Hope facility early this week to make sure the residents would be watching the races this weekend.

“When I walked in, everybody knew who I was and they started saying how much they were looking forward to it,” Leeds said. “They'd seen the race from Churchill and were pretty excited. They were asking if horses normally win in their first race and I had to explain to them that I've had horses that didn't win the first 14 times they raced.”

Leeds has hardly had bad luck as an owner in Thoroughbred racing. When he retired from the oil and gas business five years ago, he decided horse racing might be an interesting new venture. He got connected with Kenny McPeek, and was quickly hooked.

“We started out with some small shares in a few horses he had bought,” Leeds recalled. “Before any of them ever ran I was already in so deep that we went to the sales in the summer of 2015 and started buying horses ourselves.”

Since then, they've already had several top stakes contenders including Cairo Cat (Cairo Prince), who won the GIII Iroquois S. two years ago but was held back from a Breeders' Cup start due to an injury, as well as Envoutante (Uncle Mo), one of McPeek's top fillies this year who most recently claimed the GIII Remington Park Oaks. 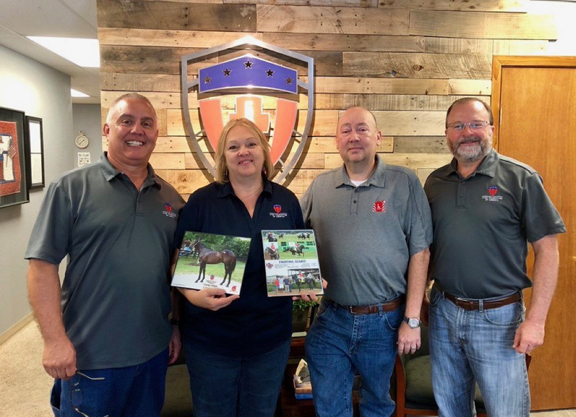 Camp Hope is not the only Walking L horse that races for a cause. It all started with a colt they named Fighting Seabee (Summer Front) in honor of Leeds's great-grandfather who was a Navy Seabee in World War II. When the colt ran undefeated in his first two starts, including a win in last year's GIII With Anticipation S., Leeds and his wife decided to share Fighting Seabee's earnings with the Seabee Historical Foundation, the PTSD Foundation of America and Camp Hope.

“We've been supporting the PTSD Foundation of America for a few years,” Leeds said. “Their mission is to support veterans who suffer from PTSD with an expectation that if they can provide peer-to-peer support and temporary housing at Camp Hope, the lives of these folks who come back from the service and have a hard time transitioning will be impacted.”

“One of the statistics that knocked us over was that 22 veterans a day, on average, commit suicide in the United States,” Leeds said. “That's one every hour and six minutes. Their mission is to stop one. If they can make one less veteran make that decision and help them cope with PTSD, the mission is successful. The groups have been so supportive and grateful for what Fighting Seebea has done. We made great racing fans out of the folks at the foundation and at Camp Hope.”

There will be much for the new fans to cheer for on Friday as Fighting Seabee will run in the 'Future Stars Friday' undercard in the Bryan Station S. hours before Camp Hope is set to make his second career start.

“We had actually already bought three horses and it was getting pretty late in the day,” Leeds recalled. “We were talking about where we were going to eat dinner that night when Bret Jones called Kenny and suggested we come look at a horse he was going to take through the ring in a few minutes. So we went back and ended up liking him a lot.”

When McPeek chose to enter Camp Hope in a 1 1/16-mile maiden race, Leeds said he had been excited to see the juvenile take on two turns. 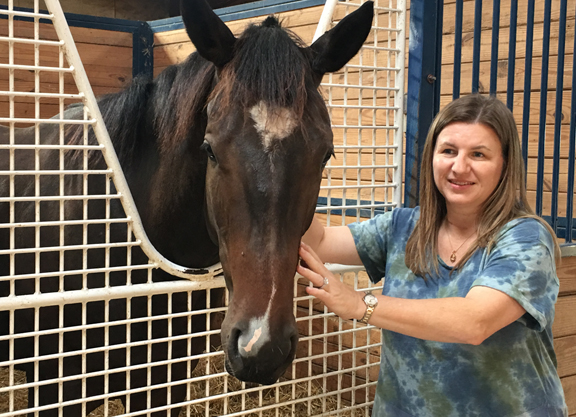 “We thought he would end up being pretty strong first-time out,” he said. “But you also expect a horse would get tired going two turns in his first start so you don't really expect to win. Coming down the backside, I saw where he was positioned and I saw the time was slow and could tell Brian had him pretty well in hand. Then I had a feeling we were in for a big performance.”

After Camp Hope's easy four-length victory, the team sat down to discuss where to go from there.

“There wasn't much to think about,” Leeds said. “Kenny and I both felt strongly that with no Lasix, coming back in 12 days really wasn't that much of a stretch. The horse didn't get asked for a lot and he galloped out even further than he won by. Brian [Hernandez, jockey] said they were on cruise. We pre-entered with the expectation that if he didn't bounce back as quickly or if there were any issues, we would obviously scratch. But he's done everything above and beyond what we've expected and I think it's going to work out great.”

While McPeek is still winless at the Breeders' Cup, he couldn't be coming in with a hotter hand this year with four other contenders including GI Preakness S. heroine Swiss Skydiver (Daredevil).

Leeds said that he and his wife will be making the trip from Texas to Lexington on Wednesday, and that they will be on-site for the rest of the week sporting their Camp Hope gear.

“We told them we're going to look for every opportunity to spread the word,” he said.

And while Leeds would certainly be thrilled with their first Breeders' Cup win, there's no doubt he would be even more excited for the rest of their connections.

“We're very fortunate and we feel like we've already outdone the expectations we set for ourselves,” he said. “If we run good, that's our goal- to show that this horse has a really bright future going into his 3-year-old campaign. But if we happen to win, we're just going to be over-the-moon excited for the horse, for Kenny, and then for Camp Hope. Being able to write the check to those people would truly be special.”