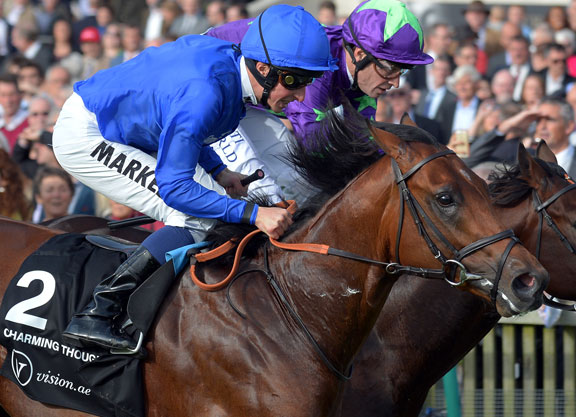 Godolphin's Charming Thought (GB) (Oasis Dream {GB}), winner of last year's G1 Middle Park S. when last seen on the racecourse, is gearing up towards a comeback in the G2 Park S. at Doncaster Sept. 12.

“Charming Thought is back in full training and the Park S. is his objective, so we will train him accordingly to get him there in peak fitness,” said trainer Charlie Appleby. “Hopefully, the race will be a stepping-stone to Champions Day, where we could aim for the [G1] QEII S. or drop back for the [G2] Champions Sprint.”

With just four juvenile starts under his belt, Appleby admitted he is still determining what Charming Thought's favored distance will be.

“We have yet to learn what his optimum trip is,” the conditioner said. “If you are looking at him, he stands up more like a sprinter and he was showing me that in the work he did at the start of the season. Potentially he could be heading down the sprint route, but we are starting him off over seven furlongs to find out a bit more about him.”

Appleby remains philosophical about the colt's time on the sidelines.

“He has physically done very well,” he noted. “There's never a good time to have a setback but, the way the summer has been with the ground being so quick, Charming Thought wouldn't have run anyway. It's unfortunate that he missed the first half of the season but, making the best of a bad situation, he has done fantastically well and lost his Group 1 penalty now.”