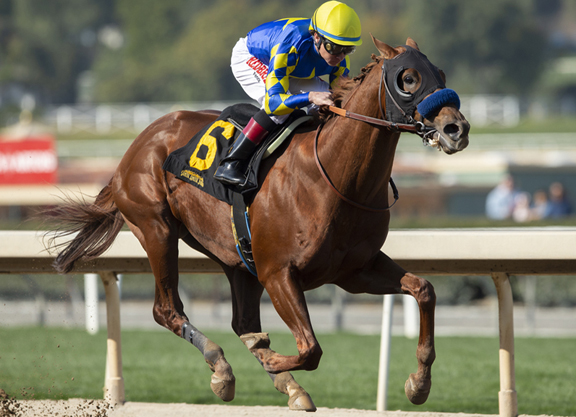 TDN Rising Star Charlatan (Speightstown), a Triple Crown candidate earlier in the season before being sidelined by injury, is expected to return to training soon, according to Starlight Racing's Jack Wolf, who campaigns the sophomore in partnership with SF Racing, Madaket Stables and Stonestreet Stables. After detecting some filling to the front ankle following a June 1 workout [five furlongs in 1:00.80] at Santa Anita, Bob Baffert confirmed that the colt would get 45 days off after an MRI revealed chips which required minor surgery.

“He's doing really well,” said Wolf. “[The Baffert barn] sent us a video of Charlatan on the backside at Del Mar the other day and he looks fantastic right now. Bob's comment was 'Too bad he won't be running in the [Kentucky] Derby.' The horse is the real deal, for sure. He hasn't had a breeze, but the plan is to start him back in a week to 10 days.”

Charlatan won his first two career starts at Santa Anita, including a front-running 10 1/4-length romp Mar. 14. Heavily favored in the second division of the May 2 GI Arkansas Derby, the colt cruised home a six-length winner over Basin (Liam's Map), but was subsequently demoted to ninth after testing positive for lidocaine, a Class 2 drug, following the race.

Earlier in the season, Baffert had mentioned the GI Preakness  S. was a outside possibility, however, the GI Breeders' Cup Classic seemed a more realistic late-season goal for the Stonestreet-bred colt.

Wolf added, “I doubt he would be ready for the Preakness, but sometimes these horses can surprise you at how quickly they come back.”