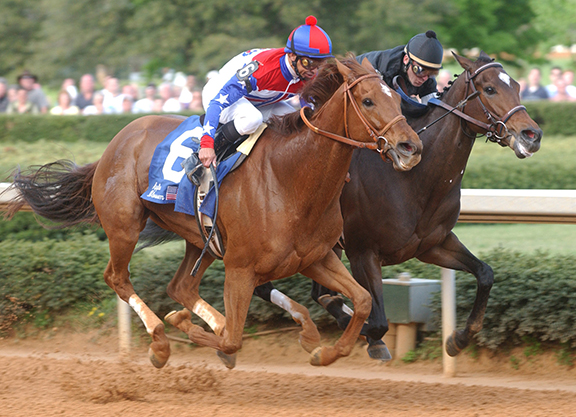 This whole industry, as I've often remarked, turns on a delicate pivot. We need pedigree to hold up sufficiently for the big investors to stay in the game, and incidentally to keep the rest of us in business; but we also need a sufficient number of unaccountable aberrations for the little guy to feel he always has some kind of chance, as well. If the top lot at Keeneland September Book I won the GI Kentucky Derby every year, then almost the whole pyramid beneath would collapse. But nor can we afford a Rich Strike (Keen Ice) to turn everything on its head too often, either.

This is why, when it comes to blue hens, we need two types of Lady in our lives. We need Leslie's Lady (Tricky Creek), the $8,000 daughter of a mare once claimed for $5,000 and a stallion who ended up in New Mexico. And we also need Take Charge Lady (Dehere), who was sold for $4.2 million after an elite racetrack career and has proved worth every cent.

In hailing yet another stellar talent under Take Charge Lady in her grandson Charge It (Tapit), we must remember that there is no more cherished tool in pedigree analysis than hindsight. Since we tend only to study the backgrounds of horses that excel sufficiently to claim our attention, it's difficult to avoid post-rationalization. Sure enough, I have often enjoyed demonstrating how Leslie's Lady was actually saturated with genetic quality a couple of generations down.

Given the mosaic of influences behind every Thoroughbred, we hardly ever find ourselves looking at the pedigree of an elite animal and discovering absolutely nowhere to hang our hat. Conversely, however, we seldom consider the countless duds to ask just what went wrong, when their pages often offer far more obvious hooks for quality.

There's an implicit assumption that the fulfilment of genetic potential has been thwarted by the fallibility of our own intervention, which can unravel a Thoroughbred's development at so many stages: foaling, raising, feeding, breaking, training.

Personally, however, I suspect that we're better off admitting that much of what we do will always be contingent on mystery. Of course, you're welcome to pay for a software program that claims to reconcile an infinite number of imponderables into some kind of system. It's your money, and we'll see you on the racetrack. But anyone who has met my charming, cultured and handsome brother will confirm what every Thoroughbred breeder knows, that even full siblings won't necessarily have the slightest thing in common.

It is now a couple of decades since William Schettine banked exactly the same sum for consecutive yearling fillies out of an unraced Rubiano mare he had bought for $42,000 at the 1998 Keeneland November Sale. The first had arrived with the mare, in utero, and was sold to Kenny McPeek for $175,000 at Fasig-Tipton's July Sale. Schettine had obviously liked her, because he had sent the mare straight back to Dehere. This time, the resulting daughter went to Keeneland September where, again offered through Bluewater Sales, she realized the same price from G. Watts Humphrey Jr.

Though named Uplifting, she fell rather flat as a runner, failing to break her maiden in a dozen attempts. Nonetheless her owner was able to cash out for a nice profit, for $450,000 to Glen Hill Farm at the 2004 Keeneland November Sale. Her sister with McPeek having meanwhile turned out to be none other than Take Charge Lady, winner of 11 of 22 starts (including three Grade Is) and nearly $2.5 million for Select Stable.

The more illustrious sister had actually been sold just minutes before in the same ring with a Seeking The Gold cover. As we've already noted, she realized nearly 10 times as much.

Now the only rule in this game is that there are no rules. Just because an identical pedigree had functioned so much better in Take Charge Lady, on the racetrack, it remained perfectly feasible that Uplifting could parlay their genes more effectively in their second career. In the event, however, this has proved one of those occasions when the market's assumptions, about the replication of ability, would be thoroughly vindicated.

Uplifting had been in foal to Came Home when she changed hands. The resulting filly was unraced before making little impact as a producer, and likewise the Smarty Jones filly Uplifting delivered next, who was discarded for $3,200. The mare was then given a chance with Medaglia d'Oro and their gelded son, while he did win a couple of times, ultimately descended to mediocre claiming company. By that stage Uplifting had been culled for $50,000, soon after delivering what unfortunately proved to be her final foal, a minor winner by Rock Hard Ten.

For all concerned, then, Uplifting proved a thoroughly deflating experience. In the meantime, her sister has founded one of the great dynasties of our time.

The most obvious point of departure is that Take Charge Lady was routinely given opportunity commensurate with the cost of her acquisition by Eaton Sales. Okay, so her first date after delivering her Seeking The Gold filly was with Fusaichi Pegasus (then still a six-figure cover); but her remaining eight named foals were by Storm Cat, A.P. Indy, Unbridled's Song, Indian Charlie, War Front (three times) and American Pharoah.

Three of these emulated their dam as Grade I winners: Will Take Charge (Unbridled's Song) in the Travers and Clark H.; Take Charge Indy (A.P. Indy) in the Florida Derby; and As Time Goes By (American Pharoah) in the Beholder Mile earlier this year. Meanwhile that first foal by Seeking The Gold, Charming, not only instantly recouped $3.2 million as a yearling but then contributed lavishly to her dam's legacy despite curtailed careers both on and off the track. Just five named foals included two elite performers in Omaha Beach (War Front) and Take Charge Brandi (Giant's Causeway), herself since dam of this year's Jerome S. winner Courvoisier (another Tapit).

By the time Take Charge Lady's daughter from the final crop of Indian Charlie arrived at the 2013 September Sale, her page was already decorated by Will Take Charge and Take Charge Indy. With residual value duly guaranteed, the filly was recruited for $2.2 million by Mandy Pope of Whisper Hill Farm, who named her I'll Take Charge. Confined to five starts, she showed fair ability (won a Belmont maiden) before commencing her second career and has wasted little time in coming up with a colt eligible to recover her cost in Charge It, her second foal. (The other is a daughter of Medaglia d'Oro, also retained by her breeder. She has required patience, now four, but has suggested the ability to win a race, again placed at Monmouth only last week).

The imposing gray Charge It could obviously have made good money as a yearling, but he looks like repaying the gamble of his retention for Pope's racing division. Unraced at two, thanks partly to an eye infection, he progressed quickly enough to run second in the GI Curlin Florida Derby, but remained pretty raw on the first Saturday in May. He apparently displaced his soft palate anyway, but was sensibly given an easy time once his chance had gone and, regrouping for the GIII Dwyer S. last Saturday, outclassed a short field by a jaw-dropping 23 lengths. He's clearly going to be a force in what is promising, after a messy Triple Crown series, to prove a dynamic second half of the year among the sophomores. Indeed, his 111 Beyer at Belmont is the top of the crop to date.

In the current context, it requires some effort to take a step back and see what lurks beyond the neon presence of his granddam in Charge It's pedigree. On doing so, however, you notice at once the branding of a second mighty mare. For Tapit's dam Tap Your Heels (Unbridled) is, of course, out of the celebrated Ruby Slippers (Nijinsky)–whose son Rubiano (by Unbridled's sire Fappiano) gave us Take Charge Lady's dam Felicita.

Through a double dose of Rubiano, interestingly, Ruby Slippers also has a top-and-bottom footprint in Omaha Beach, arguably the most brilliant member of this clan: in counterweight to Felicita (third dam, as with Charge It), his sire War Front is out of a Rubiano mare.

Tapit, meanwhile, already has a monster talent out of an Indian Charlie mare in Flightline. (Pope and her team wisely bred I'll Take Charge back to the Gainesway phenomenon after she delivered an Into Mischief colt this spring). Indian Charlie's record as a broodmare sire has also been lately enhanced by siblings Mitole (Eskendereya) and Hot Rod Charlie (Oxbow). In terms of distaff influence, however, few modern stallions have been more abundantly qualified than the sire of Take Charge Lady herself. Dehere is by one outstanding broodmare sire in Deputy Minister, out of the daughter of another in Secretariat.

Take Charge Lady's dam Felicita, as noted, was unraced but her siblings included a couple of bright streaks of green, in a Group 1-placed juvenile in Europe plus the dam of GII Breeders' Cup Turf Sprint winner Chamberlain Bridge (War Chant). That figures, their mother being by Blushing Groom (Fr)–himself, of course, another killer broodmare sire.

Besides Take Charge Lady, Felicita gave us a couple of minor graded stakes operators–one of whom (by Lear Fan) became a triple black-type producer, notably with Grade II winner/Grade I runner-up Straight Story (Giant's Causeway), also on turf. But some excellent covers, for instance by A.P. Indy twice and Deputy Minister, proved less productive. And, as we've already elaborated, repeat matings with Dehere could not have yielded more contrasting results.

Take Charge Lady, sadly lost to foaling complications in 2018, has founded a dynasty that only continues to proliferate. Omaha Beach, having received all the support he has been priced to tempt, surely has a massive chance in his new career, having exceptionally spanned his Grade I success across six and nine furlongs in the same season. And Charge It, if he can build from here, will similarly bring one of the best families around into the competition to succeed an ageing sire.

Yet how perplexing, to witness all this, for those who invested in her sister. Even our old standby, hindsight, can't really help them this time.