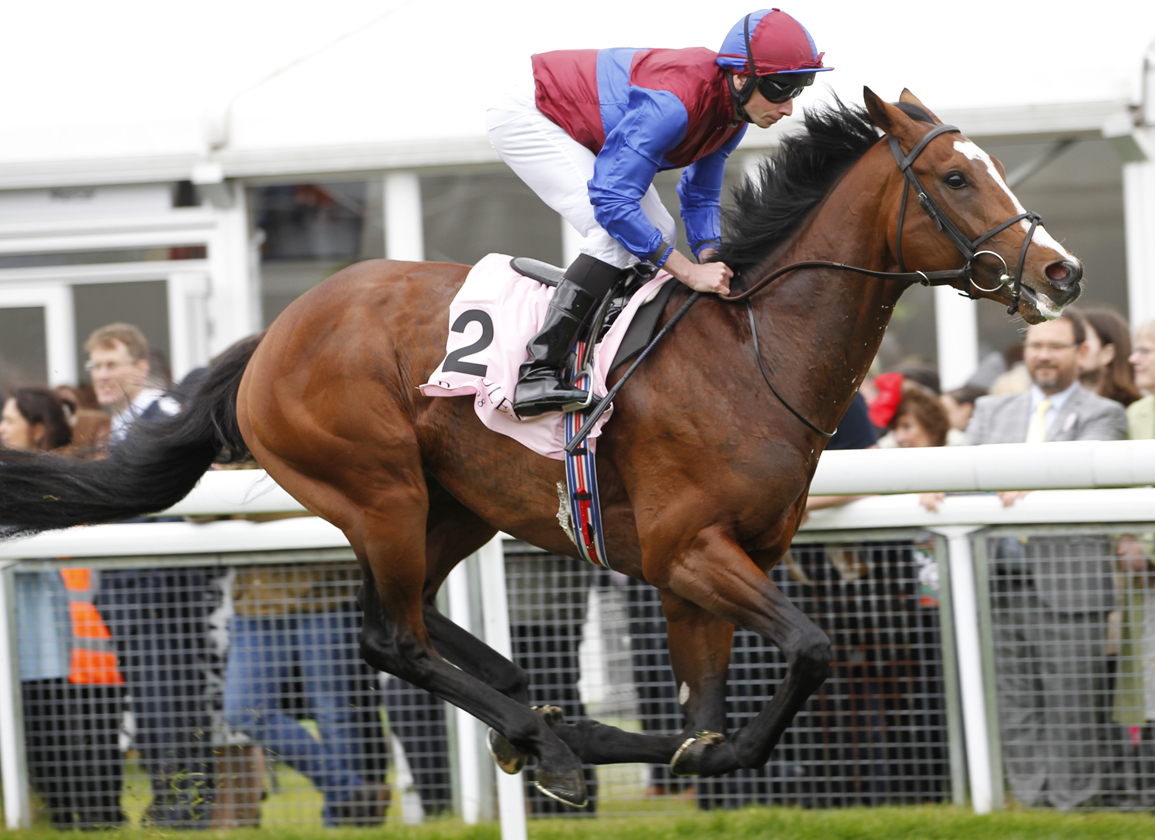 Westerberg and Coolmore's Changingoftheguard (Ire) (Galileo {Ire}) may have face markings in the form of a question mark, but there was no doubting his class in Wednesday's G3 Boodles Chester Vase as the 10-3 chance bounded to an impressive 6 1/2-length triumph and extended sire Galileo's world-record tally of stakes winners to 349 in the day's extended 12-furlong feature. He had previously graduated by six lengths in an April Fools' Day maiden at Dundalk in his fourth start on seasonal return. Ryan Moore, who had made all aboard Ballydoyle's Thoughts of June (Ire) (Galileo {Ire}) in the Listed Cheshire Oaks earlier on the card, set out to repeat the dose and was clear of his three rivals passing the judge first time. Allowed a breather as the others took closer order at halfway, the April-foaled bay was stirred into action with a half mile remaining and powered clear under mild urging in the latter stages to easily rout Godolphin's hitherto undefeated New London (Ire) (Dubawi {Ire}) by daylight for a career high. Adding to Thoughts of June's Listed Cheshire Oaks prize, Changingoftheguard extended the aforementioned new world record for Galileo to 349 and joined an honour roll which has amassed a tally approaching $200-million in stakes earnings for his 12-time champion sire. The April-foaled bay has been installed at ante-post odds of 8-1 second favourite for Epsom's June 4 G1 Cazoo Derby where, in addition to two winners as damsire, he will bid to become a record-extending sixth winner of the Blue Riband for Galileo.

“Aidan [O'Brien] felt that the horse had improved substantially since his win at Dundalk and he felt he was going to appreciate the step up in trip, so we're happy with that,” said Coolmore's Kevin Buckley. “These trials help us see what we've got and where they are and now we know with him. I would presume it's highly likely that he will head to Epsom. Aidan will have to speak to the owners, obviously, but why not? We all love the Derby and we want to win it so the more representation we have, the better. I think he's fairly flexible in terms of the ground. He acted on the all-weather at Dundalk and he handled those [soft] conditions today, so he's versatile. He's just won a trial emphatically and it's a record-breaking 10th Chester Vase for Aidan. We felt he'd improved and we're finding out where we are at the moment so we could not be happier with that performance and the winning distance too. We're in the middle of the trials now, we'll have runners in them all and see where we are after the Dante.”

“He was impressive there and we always thought he'd stay well,” O'Brien said. “He was just chinned in his [Sept. 14] maiden at Punchestown before he then went and won his maiden really well at Dundalk. There was no doubt on our part that he would take a step forward from that and improve for going up in trip. The one thing we weren't sure about today was the [soft] ground when it rained as he's such a fluid mover, but he seems to have handled it fine. We were delighted with the run and I think off the back of that, you'd have to say he'd go to Epsom now.”

Ryan Moore, collecting a record eighth Chester Vase of his own, added, “He was very impressive today. Stepping up in trip suited him and you never know with these 3-year-olds how much they're going to improve as they go up in trip. He beat a well-regarded colt, he's only just beginning to come so we wouldn't be sure what he's going to be yet, but it's a very good performance.”

Charlie Appleby's assistant Alex Merriam conceded the 4-11 favourite New London was undone by the better horse and reflected, “He just never got into it for whatever reason and Will [Buick] said he couldn't put his finger on it. Whether it was the ground or the track, it's back to the drawing board and there are a couple more trials to go. We don't want to blame the track or the ground, we were beaten by the better horse on the day.” Buick added, “The winner piled it on from the front and stayed at it. I'm sure the winner is a decent horse, but this lad has got a lot to learn still.”