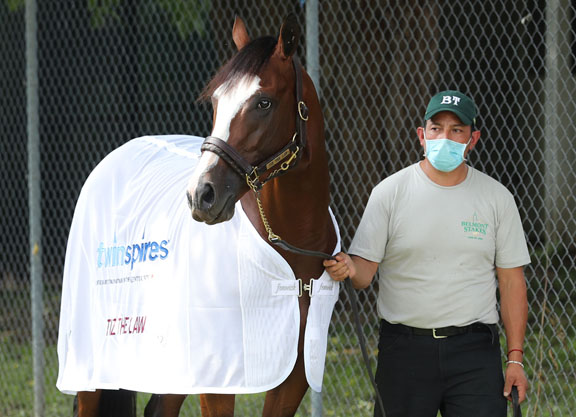 The New York State Thoroughbred Breeding and Development Fund (NYTBDF)'s board of directors announced Friday the adoption of new rules concerning the residency requirements for dams of New York-bred foals, including certain mares purchased at public auction on or after Nov. 1, 2019.

Under the new rules, a resident mare is a mare continuously in residence in the state of New York from date of conception in New York or within 120 days after her last cover in the year of conception occurring outside of New York and that remains in the state until foaling the following year, with no breed-back required. Mares that maintain their New York state resident status can be covered each season by a stallion located anywhere in the world.

Under the new rules, a non-resident mare purchased in foal through public auction will be deemed to be a resident mare for all purposes if all of the following conditions are satisfied: (1) the mare is purchased for at least $50,000 in the public auction, (2) the mare is present in the state of New York within 15 days after the sale is concluded, (3) the foal from public auction mare is foaled in New York and (4) the mare thereafter is continuously in residence in New York from within 120 days after her last cover in the year of conception of another foal and remains in residency until foaling.

“These changes will bring the New York Thoroughbred Breeding Program more in line with other states by removing perceived barriers to mares locating here,” said Breeding Fund Chairman John Poklemba. “Also, by allowing high-priced mares to establish residency by moving to New York after they are purchased at auction, we expect to see even more quality New York-breds following in the hoofprints of Grade I winners such as Tiz the Law and Simply Ravishing.”

It is anticipated that these new rules will become final upon publication in the State Register of New York on or about Nov. 18 and shall have retroactive effect with regard to eligible mares purchased at public auction occurring on or after Nov. 1, 2019.

“The Board can review the threshold price annually at its summer meeting and adjust it up or down as needed to recruit quality mares,” said Breeding Fund Executive Director Tracy Egan.

One year after adoption, the Fund and New York Racing Association (NYRA) will begin providing up to $650,000 per year in purse bonuses to owners. The bonus will be $5,000 every time a New York-sired New York-bred wins at the maiden special weight or allowance level at NYRA's tracks.

While the measure adopted by the Breeding Fund's board starts in November 2019, in practice the new rules would become effective starting with the mixed sales in November 2020 and the foal and breeding seasons of 2021.

For more information and a complete description, click here.