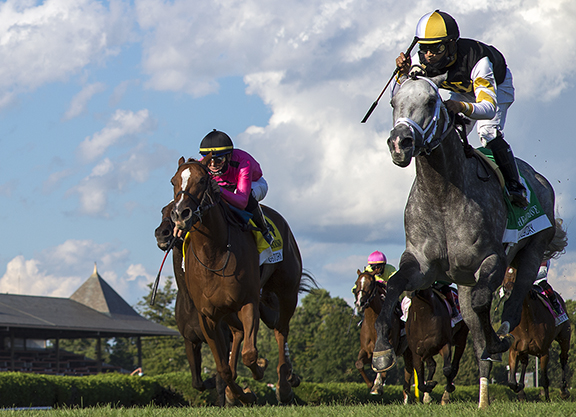 Last-out Grade I winner Halladay (War Front) is favored on the morning line for Saturday's GI Shadwell Turf Mile S. at Keeneland, but there are strong contenders up and down the lineup of the 11-horse “Win and You're In” qualifier for the GI Breeders' Cup Mile.

Dual stakes placed last fall as a sophomore, Harrell Ventures' gray captured the Tropical Park Derby at Gulfstream to close his season before running fourth in the GIII Tampa Bay S. Feb. 8. Scoring victories with triple-digit Beyers in an optional claimer and the Sunshine Forever S. this spring in Hallandale, he settled for fourth when taken off the lead in the GII Bernard Baruch H., then reverted to his previous tactics and went wire to wire in the GI Fourstardave H. Aug. 22 at Saratoga.

Chad Brown, who failed to crack the superfecta with a quartet of challengers in the Fourstardave, is back with another foursome here. 'TDN Rising Star' Analyze It (Point of Entry) leads the charge in his second start off a long layoff. Winning his first three outings by a combined 15 3/4 lengths, the bay then finished second by a neck in the GIII Pennine Ridge S., by a head in the GI Belmont Derby Invitational S. and again by a neck in the GI Secretariat S. Fourth as the chalk in this event two falls ago, he went to the bench after a third in the 2018 GI Breeders' Cup Mile and returned after over 22 months off to take the GIII Red Bank S. last out Sept. 5 at Monmouth.

Lightly-raced Flavius (War Front) dons the Juddmonte colors for Brown. Two-for-three in Ireland for Dermot Weld, he was fourth in his first two Stateside starts before running third with late traffic trouble in the First Defence S. June 7 at Belmont. The homebred put it all together with a late-running triumph in the Tourist Mile S. last out Sept. 7, earning a career-high 105 Beyer. Rounding out the Brown contingent are MGISW Raging Bull (Dark Angel {Ire}), who removes blinkers following a mild fifth in the Fourstardave, and Without Parole (GB) (Frankel {GB}), a Group 1 winner in Great Britain who is winless so far in five North American starts.

Longshot contenders include Casa Creed (Jimmy Creed), Born Great (Scat Daddy) and Ivar (Brz) (Agnes Gold {Jpn}). Casa Creed, last year's GII Hall of Fame S. winner, ran two sneaky-good races to start his 4-year-old campaign and closed well to be third in the slow-paced Fourstardave. Born Great, who has run just three times, looks to strike while the iron's hot after scoring two sharp successes in a seven-day span at Kentucky Downs. Ivar, a dual Group 1 winner in Argentina, upset a Churchill optional claimer with a 100 Beyer two back and was a strong third after dueling on a fast pace in the Tourist Mile.