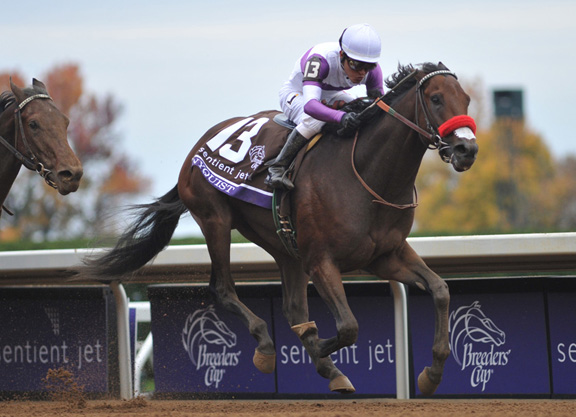 The Jockey Club has released weights for the 2015 Experimental Free Handicap. Champion juvenile male Nyquist (Uncle Mo) is tops among colts and geldings at 126 lbs., while

GII Nashua S. and GII Remsen S. winner Mohaymen (Tapit), who will face off with Greenpointcrusader in Saturday’s GII Holy Bull S. at Gulfstream Park, is one of four males rated at 119 lbs.

Eligible for weighting were all 2-year-olds of 2015 that started in graded or listed stakes races run in the continental United States or, for the first time, Canada.

The weights are meant for a hypothetical dirt race at 8 1/2 furlongs. Ratings have been published every year since 1935.

Out of 244 males and 221 fillies eligible for rating, 113 males and 105 fillies were assigned weights. Additional Canadian races increased the total number of eligible 2-year-olds by 33 fillies and 29 males, including 15 weighted fillies and 10 weighted males.

“We are very pleased to include horses from Canadian races in the Experimental Free Handicap for the first time in its history, and we are grateful to The Jockey Club of Canada and Woodbine Entertainment Group for their enthusiastic assistance,” said James L. Gagliano, president and COO of The Jockey Club. “In previous years, the only Canadian horses to be considered for the Experimental Free Handicap were those that had competed in a graded or listed stakes race in the U.S.”

Kentucky was once again the leading foaling state for weighted horses, producing 72 males and 66 fillies including the top-weighted of each sex. Florida was second with 10 males and five fillies, while Ireland led other countries with four fillies and two males assigned weights.

Record-breaking freshman sire Uncle Mo had the most foals weighted–five of each sex–while Tapit and the late Scat Daddy each had eight.

For a complete list of weight assignments, including past performances, visit the resource section of jockeyclub.com.