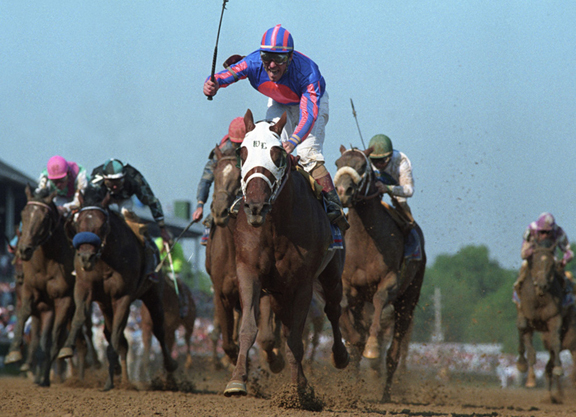 Champion and 1995 GI Kentucky Derby and GI Belmont S. winner Thunder Gulch (Gulch) has been euthanized due to the infirmities of old age, Coolmore America announced Monday. The chestnut was 26 years old and had been pensioned at Ashford Stud since 2015.

On the track, Thunder Gulch was known for his toughness and banked over $2.9 million in earnings and won four Grade I races. As a 2-year-old, he captured the GII Remsen S. before showing marked improvement over the winter months, winning the GII Fountain of Youth S. and GI Florida Derby. His wins in the Run for the Roses and the Belmont sandwiched a third-place finish in the GI Preakness S. The Michael Tabor colorbearer went on to win the GI Travers S. later in 1995, cementing championship honors as that year’s standout sophomore.

“It is a very sad day for us here at Ashford, as Thunder Gulch has been a pleasure to be around all these years and has left a major legacy at the farm as the first champion sire to reside here,” commented Coolmore America manager Dermot Ryan. “He had a remarkable 3-year-old campaign in the hands of Wayne Lukas and Gary Stevens and provided Michael and Doreen Tabor and their family with some great days. He was an incredibly tough and genuine horse on the track and we are very grateful to the Tabors for entrusting us with his stud career. I also want to say a special thanks to our stallion manager Richard Barry and his team for the exceptional care they have provided Thunder Gulch during his stud career and since he was pensioned from stud duties.”

After being pensioned, Coolmore officials noted that Thunder Gulch assumed a new role as a calming influence on younger stallions transitioning to their new life at Ashford. Most notably, Thunder Gulch’s paddock was located adjacent to 2015 Triple Crown hero American Pharoah (Pioneerof the Nile) after the latter’s retirement in late 2015.