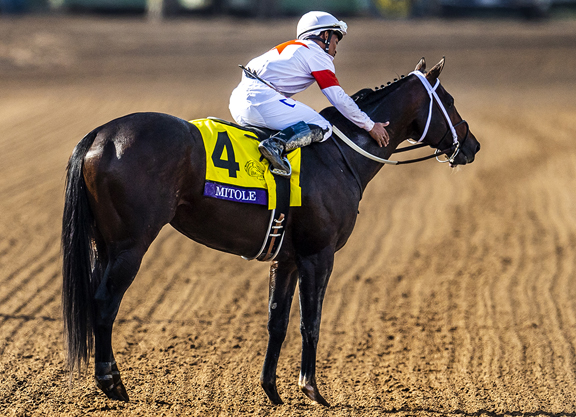 Spendthrift Farm's Mitole (Eskendereya-Indian Miss, by Indian Charlie) was represented by his first foal when a colt was born at Ballyrankin Stud near Lexington. The colt, bred by Jeff Ganje and out of Kiss Mine (Mineshaft), was reported as born Jan. 23. Kiss Mine captured six black-type wins and was multiple graded placed during her racing campaign.

“He's a very attractive, good-sized colt with a nice hip and a lot of quality,” said Sally Lockhart of Ballyrankin Stud. “I'm very pleased with him.”

Mitole was named Eclipse champion sprinter for 2019 during a season that netted four Grade I victories, including the Breeders' Cup Sprint, the Met Mile, the Forego S., and the Churchill Downs S. The earner of over $3.1 million raced in the colors of Bill and Corinne Heiligbrodt before retiring to Spendthrift for the 2020 season. He covered 230 mares last year, the second-highest number for a freshman of 2020 behind only his studmate Vino Rosso (Curlin), who was also recently represented by his first foal.