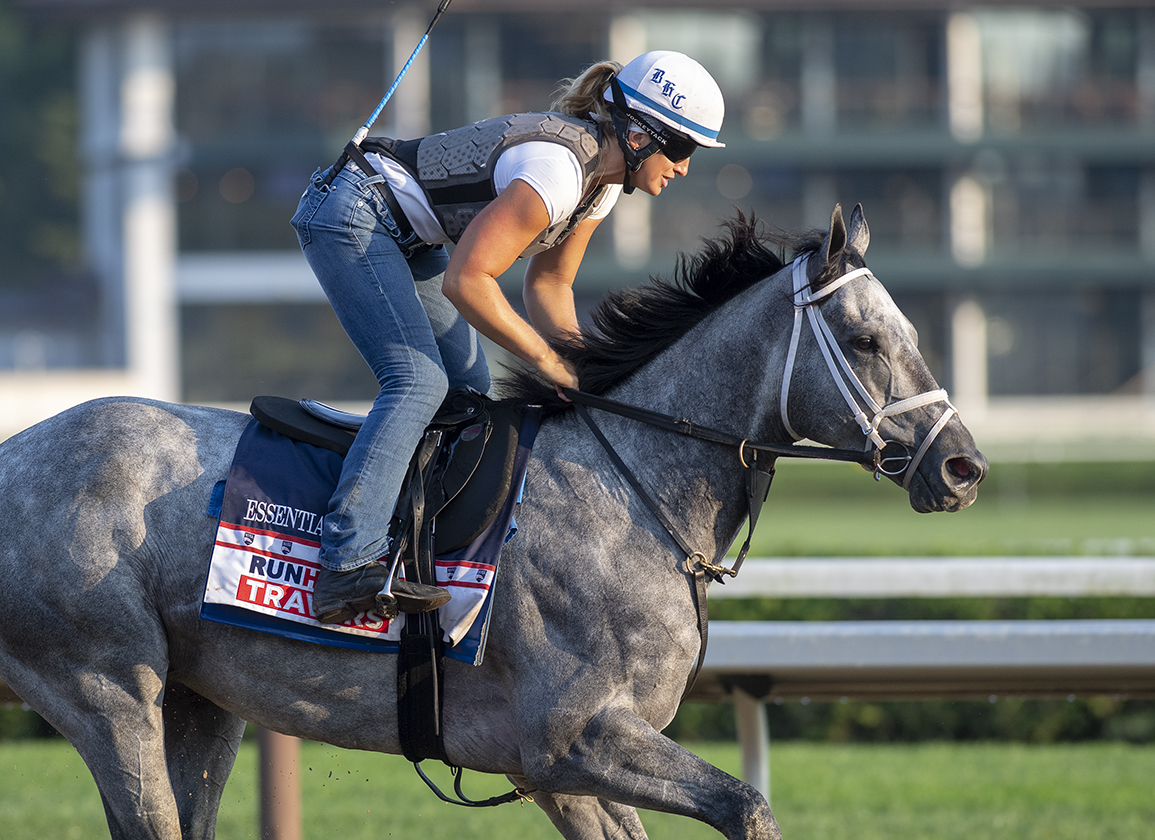 Eclipse winner Essential Quality (Tapit) headlines a strong field of seven in Saratoga's prestigious GI Runhappy Travers S. Saturday evening. Should he succeed he would be the second colt in as many as years to complete the GI Belmont S./Travers double and the first juvenile champion to take the Midsummer Derby since Street Sense won the 2007 renewal.

Opening his sophomore account with wins in the GIII Southwest S. Feb. 27 and GII Toyota Bluegrass S. Apr. 3, the Godolphin homebred was fourth as the favorite in the GI Kentucky Derby May 1. Skipping the GI Preakness S., the gray captured the June 5 Belmont and defeated Keepmeinmind (Laoban) by a half-length in the Spa's GII Jim Dandy S. July 31 with GIII Ohio Derby victor  Masqueparade (Upstart) in third.

“I feel like he's as good as he's ever been,” trainer Brad Cox said. “If we run our race, we'll be tough. There's six other good colts in there and we still have to play our game. If we do, I think we'll be a big factor.”

The ultra-consistent Midnight Bourbon (Tiznow) looks to rebound after an unlucky incident in Monmouth's GI Haskell Invitational S. last out July 17. The bay clipped heels and almost went down, losing rider Paco Lopez in the process, when Hot Rod Charlie (Oxbow) came over on him in the stretch. Hot Rod Charlie crossed the line first, but was disqualified for that incident and Mandaloun (Into Mischief) was promoted to first. Kicking off 2021 with a win in the GIII Lecomte S., Midnight Bourbon was third to Mandaloun in the GII Risen Star S. Feb. 13 and was second to Hot Rod Charlie in the GII Louisiana Derby next out Mar. 20. Rallying for sixth in the Run for the Roses, the $525,000 KEESEP buy was second in the Preakness prior to his Haskell incident.

“He's a big horse and time should benefit him a bunch as he gets bigger and stronger and more mature,” said David Fiske, bloodstock advisor to Winchell Thoroughbreds. “He'll have to break well but I should expect to see him on or near the lead.”

Missing by a head in the GII Wood Memorial S. Apr. 3, Dynamic One (Union Rags) could only manage 18th on the First Saturday in May. The $725,000 KEESEP purchase seems to be coming around at just the right time, rallying to a decisive score over the re-opposing Miles D (Curlin) in the restricted Curlin S. going nine panels at this oval July 30. The chestnut represents new Hall of Famer Todd Pletcher, who saddled his last Travers winner 10 years ago in Stay Thirsty.

Rounding out the field is blue-blooded King Fury (Curlin), who started his sophomore season on a winning note in a sloppy renewal of Keeneland's GIII Stonestreet Lexington S. Apr. 10. A close second in the Ohio Derby, the $925,000 FTSAUG acquisition was forced to miss the Jim Dandy due to his barn's quarantine. Left with limited options, trainer Ken McPeek ran his pupil on grass in the GI Saratoga Derby Invitational and he showed the turf was not for him, finishing 10th in that Aug. 7 event.

“He came out of it fine. He just got hung wide on the second turn,” McPeek said. “I really feel like he needed a run. It was going to be a couple of months between races otherwise. Unfortunately, he didn't get a chance to run in the Jim Dandy, but he will be prepared for this.”