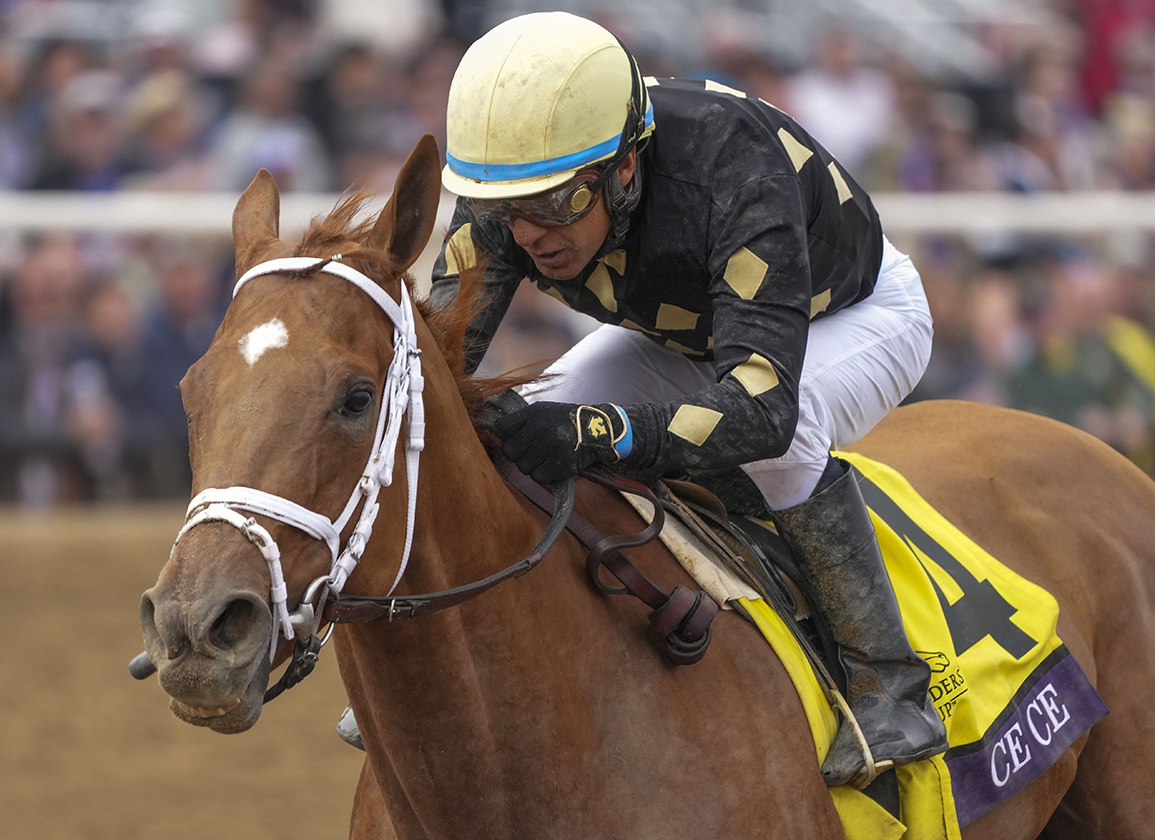 It had looked as though she had missed her cue. If the notoriously random behaviors of the Thoroughbred were really governed by some benign destiny, Ce Ce (Elusive Quality) would surely have recognized her prompt last year in the Grade I race named for the father of her owner-breeder Bo Hirsch. As it was, she was jostled leaving the gate in the Clement L. Hirsch S., took a wide trip and had to make do with third. So there you had it. We couldn't deceive ourselves that anybody up there was peering down with a Hollywood script in his hands.

How wrong we were, how gloriously wrong. For it turned out that Ce Ce's defining moment had been reserved for the arrival at the same track of the Breeders' Cup itself, when her shock success in the GI Filly & Mare Sprint saluted the memory of the man who bred her dam–and remains cherished as the modern architect of our sport in California. So it's no different from the movies: the best scripts aren't glib and schmaltzy, but true to life. Without moments of disappointment on the way, there would be no true fulfilment in the denouement.

“I do admit that to have won the Clement L. Hirsch would, for me, have been like winning the Kentucky Derby,” Hirsch says. “And I hope someday I'm lucky enough to win that race. But this was as good a day as I ever had in my life, one I'll never forget, and it's still soaking in. I can't tell you the amount of calls and emails I've had since. The whole experience was just wonderful: all these people coming up and rooting for you, Chris the barber at the track wearing a Ce Ce hat. Like most people, I thought no one was going to beat Gamine (Into Mischief) if she ran her race. But you know, it's a horse race. And I was full of hope that it might set up for Ce Ce to give her best shot.”

Whether by happy accident or thoughtful design, Hirsch found himself observing the race in a box adjacent to his trainer Mike McCarthy. Afterwards, McCarthy said that down the stretch he had “watched” Ce Ce's finish through his patron's expression, and judging from its growing euphoria what must be happening out there.

And if the celebrations brought together other joyous strands, notably the comeback of veteran rider Victor Espinoza, then there was no mistaking the principal toast. For Del Mar would not be Del Mar without the selfless dynamism and integrity of Hirsch's father, who was also the rock on which was founded the Oak Tree meet at Santa Anita.

“I felt his presence there,” admitted Hirsch. “I'm 72 years old, and I've been coming here for 72 years. My father would always rent a house on the beach, we'd come down during the summer and I loved it. It was my second home, and it still is.”

Among the messages of congratulations received by Hirsch, few moved him more than one from a stalwart of the Californian Turf, Alan Balch, who recalled the time he was going to leave Oak Tree. It felt like they had achieved everything they could hope for: the Breeders' Cup for 1984; 86,000 people at the Big 'Cap; the Olympics. Balch felt it was time to move on.

But then Hirsch's father found out, and there was his head around his office door one day: very serious, shuts the door, asks if he might sit down. What kind of pay hike, he asked, would change his mind? “I'll get it for you,” he said. “You're worth it.”

“That's the kind of guy he was,” reflects Hirsch. “I remember him starting the Oak Tree meet, back in '69, and he had to go and get approval by the Governor. And the late Dr. Jack Robbins told me one day how they went in to see [Santa Anita chairman] Robert Strub to try and get this thing finalized. And at the end of the meeting Strub says, 'You know, we could lose $2 million, $3 million, $4 million if this doesn't work out.' And those were 1969 dollars! And my father looked at him and says, 'You're covered.' And Strub says, 'Let's do it.' No contract. That's just the reputation my father had. His word was golden.”

What makes Ce Ce so special, then, is that she represents such a direct legacy to this cherished patriarch.

“My father was at the track one day when they had the [2-year-old] sale on,” Hirsch explains. “And he just walked in and there was Mel Stute, whose brother Warren was his trainer for 48 years. And he said, 'Clement, bid on this colt–he's out of my range, but bid on him, he's worth the money!' So my father turned around and bid, and 30 seconds later he owned this colt.”

Named Magical Mile (J O Tobin), the $190,000 acquisition broke the Hollywood Park track record on debut and then won a Grade II at the same track. Thereafter Hirsch Sr. went back time and again for siblings out of the same mare. The next foal won five of eight starts, including a stake at Del Mar; and then came Magical Maiden, who cost just $26,000 but won the GI Hollywood Starlet and GI Las Virgenes S.

This family has been developed elsewhere to produce champion Good Magic (Curlin) among others, but Magical Maiden had made an unpromising start to her second career when her owner died in 2000. Nonetheless the filly she had delivered a few weeks previously would find her way into a group of five horses picked out from the dispersal by Kathy Berkey (who had worked for his father) for Hirsch to maintain a residue of the program.

“I gave Kathy a budget,” recalls Hirsch. “And if I remember right, this filly took probably about half of it. I said, 'Boy, I'm not too interested in doing that. I'd rather get a few more mares to breed than start with a baby. My father bred to A.P. Indy with Magical Maiden and got nothing.' But Kathy said: 'This one is different.' So I said, 'You're the pro, let's go.'”

Warren Stute didn't think much of Miss Houdini, either, at first. “I hope you didn't pay too much for that!” he exclaimed. But she won the GI Del Mar Debutante S. and, while her track career was curtailed, went on to give Hirsch and his family a memorable ride with her second foal Papa Clem (Smart Strike), named for the affectionate way Hirsch's children had addressed his father. Papa Clem, aptly conditioned by Gary Stute, won the GII Arkansas Derby in 2009 and was just nosed out of the frame on the first Saturday in May.

“All my life, whenever friends asked did I ever go to the Derby, I had said: 'No, and I'm not going until I get a horse in there',” Hirsch recalls. “Expecting that never to happen. What an experience that week was! We took a big gang down there and just had a wonderful time. And we would have run second but for those two [Musket Man and Pioneerof the Nile] bumping us back and forth all the way down. By that time, I knew enough about the business to know that if you get a good one, you enjoy the moment–because it's going to be a long time, if ever, before you get another.”

And yet Papa Clem turned out only to be a pathfinder: Ce Ce, his half-sister, had already given their dynasty a rare distinction with her two Grade I wins last year, becoming the third consecutive elite winner along the bottom line. Hirsch stresses that he's fully alive both to the rarity of that achievement, and to its source in the combined perspiration and inspiration of his team: Berkey herself; Columbiana Farm, where he boards half a dozen mares; and, of course, the horsemen who produced her on the day.

“If you think of what Victor Espinoza has gone through, that there was a time he wasn't even sure he'd be able to lift a cup of coffee again, and now he's come back riding as good as ever,” Hirsch says. “And, like I said after the race, if there's a trainer out there who works harder than Mike McCarthy, they're working on a day that's longer than 24 hours. He is so dedicated, he eats and sleeps horses–yet also finds the time to be a wonderful family man.

“I realize how lucky I am to have that Magical Maiden line. I'm no expert, first to admit it, but Kathy spends so much time studying what sires to breed to these mares. Sires that keep us just the right size: they all look alike in the family, a little mean, a little light-bodied. I realize we're always rolling the dice, with horses, but these people have done a pretty darned good job.”

They don't have far to seek for a model. In fact, the more we look at the problems besetting our industry today, the more we need to invoke the spirit of Clement L. Hirsch. With leaders of his caliber, perhaps, we would be able to avoid the kind of trauma lately endured at Arlington.

“I agree,” says his son. “I'd love to see more people coming to the plate and doing things like that. It's not easy, of course. Both [Oak Tree and Del Mar] were done without owning the land. It would be wonderful if racetracks could be purchased by states, and leased back so that it can be profitable both for them and the industry. I can't think anything's better than the way they ran Oak Tree, and the way they run Del Mar now. How do you compete against an organization that's not doing it for profit: some of the money going to charity, the rest back into the horse business?”

As it is, the community often finds its most public-spirited, far-sighted endeavors sabotaged by factional self-interest. Do we still have leaders of this caliber? Clement Hirsch fought with the Marines on Guadalcanal. He started his sporting career when buying a greyhound threatened with euthanasia, for $2.50, and nursing him back to health and success–an experience that led incidentally to selling pet food door-to-door. Here was a man, right from the beginning, who always walked the walk.

“Well, my father was the most honorable man I've ever known,” Hirsch reflects. “And that's what he tried to teach his children, that honesty is the only policy. Be up front. And listen. Don't make decisions until you've heard both sides of the story. He was a very generous, very thoughtful man. The bottom line was always to ask what was the right thing to do?”

Whether or not our community as a whole can measure up to that legacy, at least the Hirsch equine program remains in the best of hands. Miss Houdini is entering the evening of her breeding career, but her daughter will probably have only one more season on the track before embarking on the quest for a fourth-generation Grade I winner.

“Well, Ce Ce is five years old,” Hirsch notes. “If she can produce as long as her mother, that would take us forward 15 years. And I'm 72. So who knows? We could just finish this thing off together! But whatever happens, I look forward to breeding Ce Ce to some top sires over the coming years. There's a lot more fun ahead.”