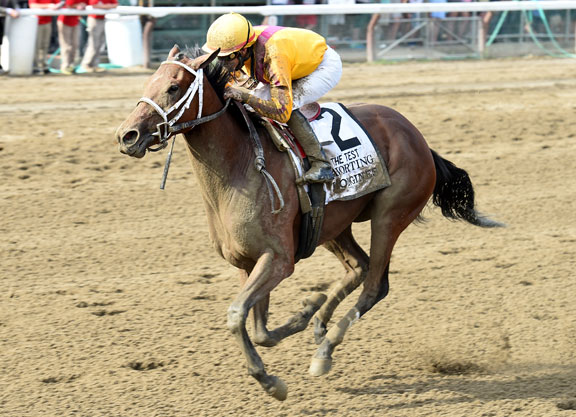 'TDN Rising Star' Cavorting (Bernardini), a smart heroine of Saratoga's GI Test S. Aug. 8, is the one to beat in Saturday's GI La Brea S. at Santa Anita. The GII Prioress S. winner rallied late after a wide trip as the 3-1 favorite to finish a respectable fourth against her elders in the GI Breeders' Cup Filly & Mare Sprint at Keeneland Oct. 31. The East Coast invader tuned up with a local four-furlong spin in :48 (10/34) Dec. 18. She has been given the nod on the morning-line at odds of 5-2.

“She went super,” said Neal McLaughlin, 46-year-old brother and assistant to trainer Kiaran McLaughlin. “It was nice to let her stretch her legs. She's a bit of a high-strung filly and can be a difficult gallop, so this is probably her exercise rider's second-favorite day. His favorite day is her day off. She's certainly fit and ready and a fast filly. We just wanted a nice path and that's what we got, so it went well.”

The streaking Hot City Girl (City Zip), a half-sister to the fleet F&M Sprint runner-up La Verdad (Yes It's True), also makes the trip from the other side of the country for this prestigious contest. Fifth after setting a scorching pace in the GI Mother Goose S. at Belmont June 27, the chestnut has been unbeatable since cutting back in distance. The GIII Charles Town Oaks S. winner followed an optional claiming tally at Belmont with a tour-de-force in Laurel's $100,000 Safely Kept S. Nov. 14. Drawn in post two, she appears to be the speed of the speed.

Ben's Duchess (Munnings), last seen picking up the pieces after getting a dream set-up in the GIII LA Woman S. in Arcadia Oct. 4, enters fresh. The runner-up that day Uzziel (Harlington) returned to capture the GII Goldikova S. on grass at Del Mar Nov. 1, while third-place finisher 'TDN Rising Star' Taris (Flatter) followed with a third in the F&M Sprint and a win in Aqueduct's GIII Go for Wand H., respectively.

“The La Brea is a tough race, but she's doing real well,” trainer John Sadler said. “She's a stakes winner, so she fits in the race. We wanted to run her at Del Mar, but the race didn't fill, so she's been off nearly three months. She's training really, really well.”