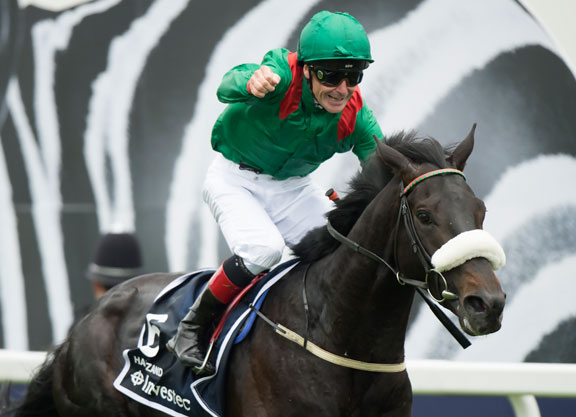 It didn’t appear to be the dawn of a new era when Miswaki’s daughter Urban Sea narrowly landed the 1993 G1 Prix de l’Arc de Triomphe at odds of 37-1. After all, there was nothing hugely unusual about a filly or mare winning the Arc: four had done so in the 1970’s and another four in the 1980’s and more recently we have seen five of the last eight Arcs fall to the distaff division.

Also, Urban Sea was by no means the best of these Arc-winning fillies, as her top Timeform rating of 126 attests. She had never previously won a Group 1 race and she was never to win another. And winning the Arc doesn’t carry an automatic ticket to broodmare success of a similar level, though two exceptions to the rule were the short-lived Gold River and Detroit, with the latter succeeding in producing an Arc-winning son in Carnegie.

It was in Urban Sea’s favour that, with a German-bred dam, she had a sufficiently outcross pedigree to allow her access to most of Europe’s top stallions. I never suspected, though, that she would do so exceptionally well that she could be said to be shaping today’s European Classic Thoroughbreds.

On a couple of wintry days in February, while working on an article for the Thoroughbred Owner & Breeder, I happily analysed the entries for this year’s first four French classics, throwing in the G1 Grand Prix de Paris–arguably France’s true equivalent to the Derby–for good measure. By adding the Grand Prix, I hoped to provide a more level playing field for the stallions whose progeny are capable of shining over a mile and a half.

I wasn’t surprised to find that Urban Sea’s Derby-winning son Galileo topped the table, with an enormous total of 53 individuals among the Group 1 hopefuls, but I was slightly surprised that the likes of Dubawi, Dansili and Shamardal had been beaten to second place by Sea The Stars, Urban Sea’s other Derby-winning son. This Gilltown Stud resident had 27 members of his 122-strong third crop among the entries, five more than Dubawi.

It turns out that this exercise was a pretty good pointer to what would happen when the European Classic season got under way, with Galileo confirming his status as the world’s best stallion. In Britain he sired first, second and third in the G1 1000 Guineas (Minding, Ballydoyle and Alice Springs), with Minding going on to win the G1 Investec Oaks. We also saw the G1 2000 Guineas fall to a colt out of a Galileo mare, with second place going to a colt by a son of Galileo. Galileo also struck Classic gold when The Gurkha took the G1 Poule d’Essai des Poulains by more than five lengths on only his third appearance and he also made his presence felt in the G1 Poule d’Essai des Pouliches, as the winner, La Cressonniere, is another with a dam by Galileo.

Then we came to Saturday’s Investec Derby, which attracted 16 runners. No fewer than five of them were by Galileo, with another three by Sea The Stars. In other words, Urban Sea’s two Derby-winning sons were responsible for exactly half of the field. Two more of the 16 were sired by sons of Galileo and another is out of a Galileo mare.

Of course the Urban Sea clan dominated the finish, with Sea The Stars’s imposing son Harzand proving too strong for Galileo’s sons US Army Ranger and ‘TDN Rising Star’ Idaho. This means that, over the last nine years, Urban Sea had been responsible for one Derby winner (Sea The Stars in 2009), with her sons supplying another four, Harzand’s predecessors being Galileo’s sons New Approach, Ruler Of The World and Australia. If they keep this up–and there is every reason to think they will –they may have to be reported to the Monopolies Commission. In another year or two, Urban Sea may have another source of Classic contenders, as her G1 Irish Derby runner-up Born To Sea was represented by his first winner on the day after the Derby.

With his fee standing at €125,000 for a second successive year, Sea The Stars is now firmly established as one of Europe’s highest-priced stallions. He spent the previous five years at a fee of €85,000, but even a horse as exceptional as Sea The Stars hasn’t always been immune to the whims of the breeding community. In 2011, in his second season, he attracted only 83 mares, compared to Galileo’s 215, and this second crop numbered just 67 foals, compared to 118 in Sea The Stars’ first crop. Although he bounced back in his third year (138 mares for 122 foals), following some highly encouraging prices for his first weanlings at the sales, it was again hard work in his fourth season in 2013, with a book of 83 mares resulting in a crop of 70 foals, now 2-year-olds.

Happily, his early results on the track were sufficiently encouraging for him to attract 113 mares in 2015 and around 160 in 2015, after his first 3-year-olds had underlined his potential to be just as outstanding as a stallion as he’d been on the racecourse.

Sea The Stars’s record shows that even young stallions with exceptional racing records–whose fees are proportionate to their talent–are occasionally going to find it hard to compete with the proven elite sires. Perhaps breeders were a bit worried that Sea The Stars was by Cape Cross, rather than Sadler’s Wells, a proven sire of sires. However, Cape Cross has gone on to sire another Derby and Arc winner in Golden Horn and his outstanding daughter Ouija Board produced yet another Derby winner in Galileo’s son Australia. Cape Cross now has a new Classic winner to his credit in Awtaad, winner of this year’s G1 Irish 2000 Guineas, so it is becoming harder and harder to find fault with his record.

It is also becoming harder and harder to find fault with Sea The Stars. From three crops of 3-year-olds, he has been represented not only by Harzand but also by an impressive Oaks winner in Taghrooda (who also beat the males in the G1 King George) and a runaway G1 German Derby winner in Sea The Moon. Then there’s Storm The Stars, who last year finished third in the Derby and second in the Irish Derby, and Shamkiyr, runner-up in the 2014 G1 Prix du Jockey-Club.

It is worth mentioning that none of the above was particularly precocious. Most of them ran only once at two and this is a reminder that Sea The Stars himself improved considerably from two to three, even though he was a Group 2 winner as a juvenile. His Timeform rating soared from 109p at two to a monstrous 140 at three, when Sea The Stars emerged unbeaten in a six-race campaign. In winning the 2000 Guineas, Derby, Eclipse S., Juddmonte International, Irish Champion S. and the Arc, he not only demonstrated huge ability, but also admirable versatility and admirable soundness. His relaxed temperament was also very much in evidence, as were his obvious good looks.

These qualities have now combined to help him sire an impressive total of eight group winners and four listed winners in that first crop of 118, and the signs are that Harzand’s crop– the one with 27 entries in the French “Classics”–will eventually rival that type of score. It also features Cloth of Stars, the G2 Prix Greffulhe winner (who ran well up to a point in the Derby) and the G2 Prix Hocquart winner Mekhtaal (who disappointed as favourite for Sunday’s Prix du Jockey-Club).

Of course Harzand’s win represents another triumph for his owner-breeder, the Aga Khan, who has now matched the five Derby winners achieved by his grandfather between 1930 and 1952. The current Aga owes his first three Derby winners–Shergar, Shahrastani and Kahyasi–to female lines developed by his grandfather, but Sinndar came from one of the Boussac families brought into the Aga’s studs in the 1970’s. Harzand also comes from a non-Aga Khan female line, but not from the sizeable Boussac, Dupre or Lagardere acquisitions which have produced so many top winners for him.

In a transaction which went largely unnoticed in the late 1980’s, the Aga Khan acquired a small number of mares from Brook Holliday, successor to the late Major Lionel Holliday. Major Holliday had operated a tremendously successful breeding operation, developing a remarkably effective family from Lost Soul and her daughter Phase. Holliday became Britain’s leading owner in 1956, 1961 and 1962. A notoriously difficult man, Holliday had a succession of trainers and once famously commented that these trainers “all come to me on bicycles and leave in Bentleys.”

Although he will probably be best remembered as the man who bred the great Vaguely Noble, who was sold two years after his breeder’s death in 1965, he won British Classics with Neasham Belle, Night Off and Hethersett –the last-named being the 1962 G1 St Leger winner responsible for Harzand’s third dam, Hazy Idea.

The Holliday horses’ names always started with the same initial as their sires’. In addition to Hazy Idea, the Aga’s purchases included Bird Reserve and Blissful Evening (both by Hethersett’s son Blakeney), Hethersett’s G1 Prix Vermeille winner Highest Hopes and two daughters–Haughty Manner and Triumphant–of the admirably talented and versatile mare Pugnacity, dam of the high-class Relkino. Part of these mares’ appeal must have been that their pedigrees often featured Djebel and other bloodlines which had played their part in the success of the Aga’s studs.

One of Pugnacity’s daughters supplied the Aga with the top-class filly Timarida and this family is still present in the Aga’s stud book, but arguably a more prolific source of good winners has been the family descending from Hazy Idea. Although this smart and versatile filly won at up to a mile and three-quarters, her finest achievement as a broodmare was her high-class Habitat colt Hittite Glory, who was fast enough to win the G1 Flying Childers S. and G1 Middle Park S. and to finish third in the G1 King’s Stand S.

Hazy Idea produced two daughters for her new owner, the Siberian Express filly Harouniya and the Darshaan filly Hazaradjat. Both were to produce group/graded winners, but it is Hazaradjat who concerns us here. Not only is she the second dam of Harzand, but also of Humphrey Bogart, a creditable fifth in the Derby.

Hazaradjat, a winner of two of her three starts, produced a pair of group-winning daughters in Hazarista (a Barathea filly who was third in the G1 Irish Oaks and G1 Yorkshire Oaks) and Harzand’s dam, the Xaar mare Hazariya. Another of her daughters, Handaza, was a good broodmare and it was one of Handaza’s daughters, Hannda, who produced Seal of Approval, winner of the G1 QIPCO British Champions Fillies & Mares S.

Hazariya was a Group 3 winner over seven furlongs at three and progressed well enough to start at 10-1 for the Irish Oaks, but unfortunately had to be pulled up and never raced again. The Aga Khan has never been afraid of selling an accomplished broodmare if the timing seems right, a good example being that fine mare Darara. He also sold Hazariya for €480,000 as a 12-year-old in 2014, when the mare was carrying to a May 19 cover by Fastnet Rock. Newsells Park was the beneficiary, with Hazariya producing a filly.

The Aga’s willingness to sell Hazariya reflected the fact that she had produced four daughters prior to Harzand, who is followed by Haripour, a 2014 colt by Shamardal. All four of these daughters–the listed winner Hazarafa, the group-placed Haziyna, the Group 3 winner Harasiya and the winner Hazaraba–are in the Aga’s 2015 stud book.

As these daughters have been visiting the likes of New Approach, Shamardal, Camelot, Mastercraftsman, Lope de Vega and Sea The Stars in recent years, there is every chance that this family is going to continue to shine long after Harzand has retired to stud.