Catemaco Wins After Near Death Experience 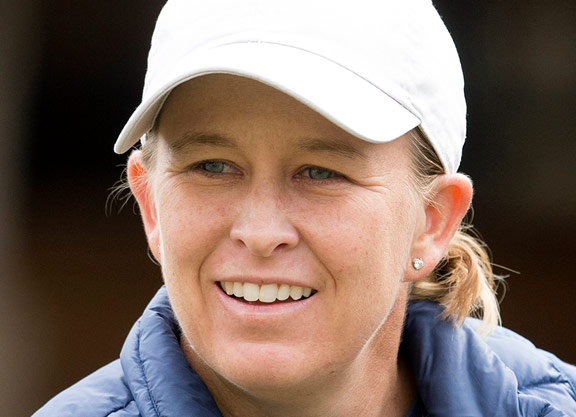 A 4-year-old colt bred in California Mar. 23, 2017, Catemaco (Girolamo) won his first start Friday by a widening four lengths at Santa Anita, leading throughout six furlongs in a sprightly 1:09.08, paying $30.60 to his scattered backers and earning $36,000 for owners Twilight Racing LLC and Steve Taub, all pretty remarkable facts in their own right.

But truth be told, it's a miracle Catemaco is even alive.

He swallowed a black widow spider when he was 4-months-old, had a reaction that put him near death and would have died if it hadn't been for the diligent response of his trainer and breeder, Kristin Mulhall.

After completing training at Santa Anita one morning, Mulhall arrived at her home in Covina Hills where she keeps some horses on her two-acre spread, only to find Catemaco lying down, “struggling to breathe.”

“The horse couldn't breathe at all,” Mulhall said. “There was froth coming out of his nose, his eyes were bloodshot and cloudy. He was seconds away from dying.”

Mulhall's passion and persistence prevented his death even though she had only rudimentary tools at her disposal.

“I called my vet, Melinda Blue,” the conditioner said. “We were on FaceTime and she was having her hair done. She said find anything, and I found a box blade. Fortunately, my tack room was right next to where the horse was. She told me to feel the ridges in his throat to find his trachea and slice a hole all the way through it, and he started breathing through that.

“Then I said, 'Now what?' and she said, 'Find any kind of tube,' and I found a syringe casing, cut the end of it and shoved it in, but I only had a couple minutes before the hole would plug up with foam and stuff. I tried to shove it in, but the hole closed and he was flailing around really bad like a fish out of water, I tried to cut it again but couldn't.

“At that point, Humberto Gomez [Bob Baffert's exercise rider, known as Beto] had returned and he held the horse's feet and head. I got it through the trachea the third time I tried, made a bigger hole, which I was able to open with my finger to insert the casing.

“Then I called Melinda back and asked how the casing would stay in. I had to find dental floss and the largest needle I could, tie the dental floss to the needle and try to suture the hole the best way I could. I said I don't know how to do that. She said just tie a knot. Put it through the hole, through the skin and tie a knot on both sides, and that will hold it in until you get him to the hospital.

“Beto was holding Catemaco until I found everything I needed, we got it all done but then we didn't know if he was going to get up, if he was brain-dead or what. He got up after an hour. His eyes were still bloodshot and cloudy, but he was up and walking. We put him in the back of the trailer with his mom and Humberto stayed with them, holding the tube in place.

“We took them to Chino Hills Equine Hospital and Dr. [Andreas] Klohnen, the head vet there, was absolutely shocked at what he saw. The horse would have been dead if we didn't do what we did, so the doctor was able to administer the correct implements for about two days before the swelling went down enough that they were comfortable to remove it. The horse was in the hospital about a week before I brought him back home and he's been fine ever since. It didn't affect him at all.”

Catemaco is named for a horse by the same name that Gomez said was 'a freak' when he rode him as a jockey in Mexico City. Catemaco also is a city in the Mexican state of Veracruz.

“It was his favorite horse he ever rode and he asked me to name my foal Catemaco, so I did,” Mulhall said.

Mulhall, 38, is the daughter of the late trainer Richard Mulhall, who managed the late Prince Ahmed Salman's The Thoroughbred Corp. after a lengthy training career in Southern California. She was an Olympic-caliber equestrian rider through her teens before being grounded by a serious arm injury. She obtained her trainer's license in 2002 after working for trainer John Shirreffs. Presently, she has 23 head at Santa Anita and some horses for trainer Jonathan Wong at her Covina Hills location.

Her emotions understandably flooded forth after watching Catemaco win Friday.

“I couldn't hold the tears back,” Mulhall said. “That's the first time I cried after a race. That horse means so much to me, he's so special. The fact that he lived through that and he had the heart to fight through that is pretty unbelievable. I grew up with War Emblem, Point Given, Spain and all those good horses at their farm. I was around some special ones.”

But none as special as Catemaco.