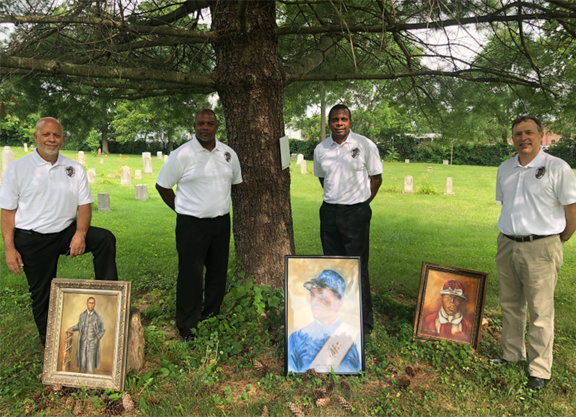 Click here to view our July, 2020 feature on PPAATH.

Last summer, the TDN was first introduced to the Project to Preserve African American Turf History (PPAATH), a Louisville-based group that promotes the education of African American contributions to racing throughout history. In 'The First Steps Towards Inclusiveness in Racing,' we spoke with CEO and Founder Leon Nichols on the inception of their organization and how they hope to change the sport of racing for the better.

A few months after our meeting, the group was featured on NBC's coverage of the 146th Running of the Kentucky Derby in a lead-up story on Necker Island (Hard Spun), the first African American-owned Derby horse in the last 13 years.

Since we last met, PPAATH has created several key partnerships that have allowed them to broaden their outreach.

“Since July, it's been a fabulous growth period for us,” said Nichols. “It takes a community, but this history deserves no less and I think it's all about driving a narrative of diversity and inclusion. To see the evolvement of all this and see the commitment from business leaders and the educational community has been beyond our wildest dream.”

We sat down with PPAATH and their partnership leaders as they shared what they've been up to recently.

Tawana Bain, the CEO of New Age Communications, did not grow up in Louisville, but the award-winning businesswoman said she will never forget her first Kentucky Derby experience.

“When I first moved to Louisville, I had never seen anything so segregated as Derby week,” she said.

“Depending on what social circle you traveled in, if you were a Black professional you were literally zig-zagging across 9th Street because the parties were so separate,” she continued, citing what is known as 'The 9th Street Divide' in Louisville, an invisible racial line that separates the east and west side of the city.

“The Summit's various events are designed to draw a community that has been left out of the Derby and attract them back to the Thoroughbred industry in general,” she said.

Last year, Bain connected with PPAATH to help with a virtual DDBS experience on the history of Black jockeys. The event was held on the rooftop of Encore on 4th, a restaurant Bain has owned since 2018. 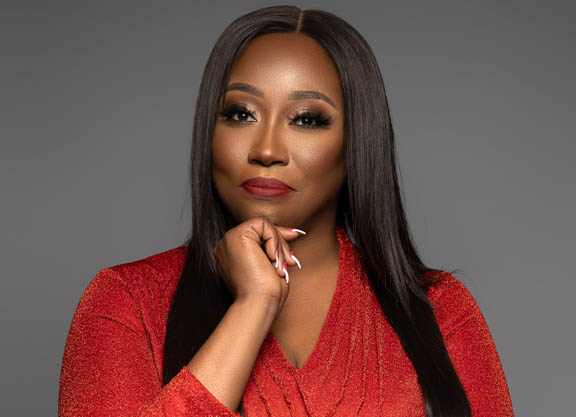 The evening was such a success that they were inspired to give the concept a more permanent structure by transforming Encore into a restaurant and entertainment venue geared towards celebrating the history of Black jockeys.

They re-named the restaurant 'The Black Jockey Lounge.'

“Prior to COVID, our venue was a destination venue,” Bain said. “It was an experience–the music, the food, the people you knew you would expect to see. We are no longer the only venue that caters to Black professionals who want to do something at night, which is a good thing, but we needed something to set us apart. This concept is unique. It's historic.”

The Black Jockey Lounge, located on 630 S. Fourth Street in Louisville, officially opened this past weekend with live music from the KMF Band. PPAATH brings history to the re-designed space with artwork they have collected of some of the winningest jockeys in history. The menu has also been updated with racing-inspired items.

Calvin Davis, PPAATH's President and Co-Founder, said that the restaurant's location makes it all the more unique.

“This is a historical community being just across from The Palace Theatre and down the street from The Brown Hotel,” he said. “When Jimmy Winkfield [the last African American jockey to ride a Kentucky Derby winner in 1902] went to attend a luncheon held in his honor in 1961 at the Brown Hotel, he was not allowed into his own luncheon. A bellhop didn't recognize Mr. Winkfield and they didn't allow him in to receive his award.”

Even 60 years later, Bain said their location is still an important site for the civil rights movement in the city.

“During the civil unrest last year while we were boarded up, we were one of the stopping places for a lot of protesters of every race and age,” she said. “There's a history there with what we've experienced and who we cater to, and now it's a historical place for tourists who want to know the history and have great food. We really created a niche that I think this city needs and I think we've got something that can revitalize downtown.”

“We think it's going to be something really unique,” Davis added. “It will be a fun place for all people to come get some really good, upscale food, but at the same time, leave with a nugget of history because these stories will just blow you away when you hear the accomplishments of these jockeys.”

James Natsis serves as PPAATH'S Vice President of Global Affairs and is also a writer for various publications around Louisville.

In 2019, Natsis wrote a feature on the re-opening of Kentucky Peerless Distilling Company, a Louisville-based bourbon distillery that was revived that year after a 102-year hiatus.

Recently, Natsis had the idea for PPAATH to join forces with the distillery.

“They're a family-run business established in the 1880s, so I thought they would be perfect for us,” he said. “When I wrote them, I heard from their marketing person immediately. He was excited to meet with us and now we are making arrangements to launch the first-ever commemorative bottle of bourbon that pays tribute to Black jockeys.”

“They're going to pay a percentage of the sales back to our organization and that will go to help PPAATH create those products and services that will help draw the dollar back to our community,” Davis said.

The new bourbon edition is set to launch in mid-April in the weeks leading up to the Kentucky Derby. 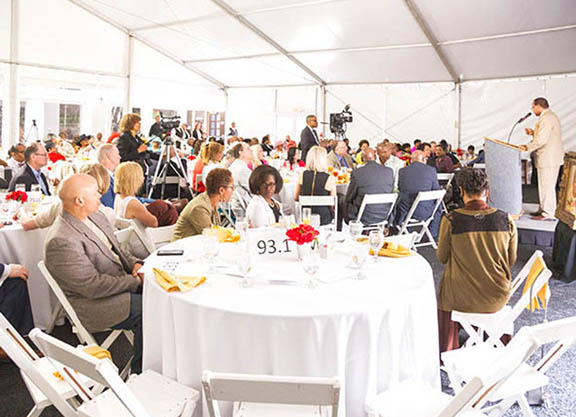 The first Race to Greatness event was held at the Kentucky Derby Museum at Churchill Downs. | photo courtesy Von Purdy

Von Purdy is the Director of Community Engagement and Development Officer at Simmons College of Kentucky, the only historically Black college in Louisville.

Purdy had no prior connection to the racing industry when she noticed pictures of Black jockeys at Shirley May's Café, a historical soul food restaurant in Louisville's Smoketown district. She was shocked to learn the jockeys' stories.

“I had no idea,” she said. “I don't think this town does a good job of highlighting the history of the Black jockeys, especially to people who aren't from here. I thought to myself, 'Why is Simmons not involved with this history since we're a place of education?'”

Purdy was inspired to create 'Race to Greatness: A Celebration of the Black Jockeys of the Kentucky Derby.' The event is held annually as a brunch following Thunder Over Louisville, the annual kickoff to the Kentucky Derby Festival.

To provide historical context for the event, Purdy enlisted the help of the PPAATH team to provide artwork and educational pieces for participants to learn from.

While the event was cancelled last year due to COVID, Purdy said they have plans to bring it back this April. The first two functions were held at the Kentucky Derby Museum, but this year it will take place at Millionaire's Row at Churchill Downs. The venue can hold up to 800 people, but Purdy plans to limit the guest list to 300 to engage in proper social distancing.

“We want to educate our students and the public and are using this event to do so,” she said. “We want to move the message to help highlight these jockeys.”

PPAATH has several other projects on the horizon in the coming months.

The Kentucky Derby Museum recently launched a newly expanded exhibit that showcases the impact African Americans have had on racing throughout history.

PPAATH is working with the museum to provide colored prints for visitors to purchase and take home.

“The museum has a visual history from their archives, but we're trying to develop a partnership where we can get artwork available for sale in the retail store so people can take these prints home,” said PPAATH's Vice President and Co-Founder Jerry Fife. “I think a combination of what we've been doing has made them realize the value of pulling this information out, literally out of the basement, and getting it in front of people.”

In addition, PPAATH has partnered with Brown-Forman Corporation, one of the largest American-owned wine and spirits companies that manufactures, among others, Jack Daniel's and Woodford Reserve, to create a Black History Month Fireside Chat event for internal educational use within Brown-Forman's organization.

Nichols said that this first collaboration has already created additional projects with Brown-Forman still in the early stages of development.

Nichols said that he and his team are grateful for the media attention their group has received in the past few months that has allowed them to broaden their outreach to a wider audience.

“The opportunities are endless and with the launch of the first bricks-and-mortar dedication with The Black Jockey Lounge, it's really gotten national attention with media waiting until it all comes together,” he said. “It's really not just a community or a state-wide initiation. The media has given some national legs to it.”

Nichols said that now, more than ever, their mission is essential for the betterment of the racing community.

“I always tell people it's eerily similar as far as the pulse of the nation in 2021 and what was the pulse of the nation in 1896,” he said. “The parallels are strikingly similar. As we know, coming out of the Jim Crow era on into the 20th century, it wasn't just the expulsion of talent, it was the expulsion of a consumer base that had been with horse racing for the last 200 years. Over time, the impact of that on the industry is still being felt today. Now we're in a space where the Kentucky Derby and horse racing in general can take the lead in being an ambassador to drive social change around this nation.”