Catching Up With Fredrik ReuterskiÖld 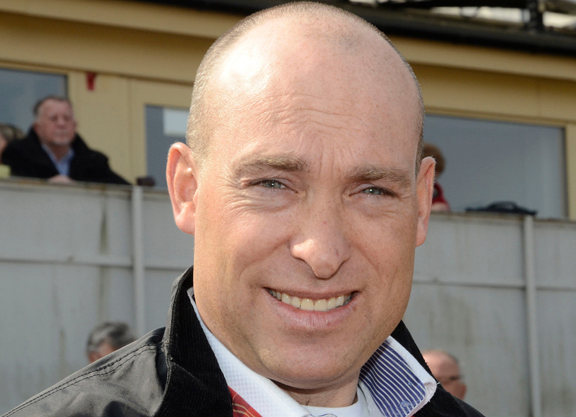 Swedish trainer Fredrik Reuterskiöld was pretty much born into horse racing. Growing up in his parents' training yard, it is maybe not surprising that Fredrik and his brothers, Lennart Jr. and Johan, all ended up training on their own as soon as they were old enough.

It was at the age of 10 that Reuterskiöld decided that he wanted to set up his own training business one day. “We had a runner in the Swedish Derby at Jägersro in 1982, and I remember it well,” he laughed. “Since that day, I've just been obsessed with racing, training, and the idea of winning the Swedish Derby.”

After having worked as an assistant for his father for several years, Reuterskiöld started out on his own in 1999. He has been at the top of the Swedish training ranks ever since, and now has more than 500 winners under his belt.

Three of those winners have saluted in the Swedish Derby, the race he dreamt about winning as a 10-year-old child. Last year, Fredrik and Lennart saddled the first three home in the prestigious event. Only a short neck separated the trio when they crossed the line, with Duke of Burden (Ire) (Footstepsinthesand {GB}) prevailing. And although Lennart's horse was the one to put his nose in front, it was a success for the whole family.

“Of course we are competitors–big ones–on the track, but we have managed to stay very close friends throughout the years,” Reuterskiöld said regarding the relationship with his brother, who trains in the barn next door to him at Jägersro, a racecourse and training centre in Malmö in the very south of Sweden. The brothers often find their horses competing in the same races, they both have around 30 horses in training, and last year they both saddled 32 winners.

“The family has always meant a lot, probably more than my own success,” continued Reuterskiöld. “To have the whole family involved in racing has been a great help over the years. Horses and racing are so central in our lives and there is always someone there to discuss new ideas with. But you can't rely on someone else's name. You have to create your own success, and I have gotten nothing for free.”

A humble man, Reuterskiöld is not one to brag about his successes on the track, but they are many. “I have been lucky to get good clients who have been willing to buy good horses,” he added.

Many of these horses have been purchased at Keeneland in Lexington, Kentucky. Reuterskiöld is one of the few Scandinavian trainers who regularly attends the American yearling sales. For him, it makes a lot of sense to go across the Atlantic sourcing future stars.

Reuterskiöld explained, “The Swedish racing industry is very much based on an American model. The bulk of racing is on dirt, which will favour speed, and most trainers are based on the tracks, just like in the U.S. I have bought almost 40 horses at Keeneland over the past 10-15 years and have had great success with them. I could never afford to buy the most expensive ones. We would rarely spend more than $30,000, but I have won many nice races over the years with the American horses.”

The current stable star, 4-year-old Gunvald (Proud Citizen), is one of the recent examples. A $20,000 purchase at the 2014 Keeneland September Yearling Sale, he has earned more than SEK 1 million ($115,000/£89,985/€102,000) in 12 starts so far, and is one of the highest-rated horses in the country. Other Scandinavians have been sighted at Keeneland, but no one has bought horses to the same extent as Reuterskiöld and his owners.

“If I can get the clients on board, we will definitely be back at Keeneland in September,” the trainer said. “I don't know why more Scandinavians [don't] go. Maybe they just feel more comfortable at the European sales. Buying horses in America is a big project. It's a lot of paperwork and you must organise quarantine and flights home. And unfortunately, American horses have a bad reputation that they don't deserve, about having been raised on drugs, and all that. It's completely unjustified.”

The Derby dream has been achieved several times over, but according to Reuterskiöld, one cannot win the Swedish Derby too many times. With just over a month to go until the 100th running of the race on July 16, the trainer hopes that one of his recent Keeneland-purchases can fly the flag for the stable and become his third American-bred winner of the race.

“Plata O Plomo, by Paddy O'Prado and out of the multiple graded stakes mare Profitability, runs in [the] Voterlöpning [one of the important Derby prep races] at Jägersro on Thursday,” he said. “It will be interesting to see what he can do.”

The $30,000 2015 KEESEP graduate debuted at Jägersro in April, where he won convincingly by seven lengths.

This year's renewal of the race is worth SEK 3 million ($345,000/£269,917/€307,000), a considerable sum for a race in a country which most people would forget to even mention when talking about the international racing industry.

Reuterskiöld suggested that the good conditions for owners and trainers within the Scandinavian borders is part of the reason why Scandinavian racing hasn't managed to establish itself internationally.

“I think we need a good horse to place us on the world map of racing, one that can go and win a big race,” he said. “I believe some of our horses could be competitive abroad, if we just tried. But with the good prize money at home, people [would] rather stay and race in Scandinavia. I suppose you can't have your cake and eat it too. ”

“I have had runners and winners in Germany and France. To train abroad would be a dream and if I had the chance, I would go,” Reuterskiöld reflected. “But you need to have a client that really believes in you and that is willing to invest a lot of money. You can't go to a major racing nation and say 'Hi I'm Fredrik and I have been champion trainer in Sweden' and think that people will send you horses.”

However, the Swede is still hoping for some more international success and the next target is Dubai.

Reuterskiöld concluded, “I have tried to win a race in Dubai for many years, and I have been very close: second, third, fourth… It would have been fun to win a race there and I hope to be back for the Carnival next year. But you need a good horse and you need to have the owners on board. The organisers are very generous, but it is still expensive. The owners have to accept that it's very difficult to win any prize money and that it is expensive to be there. But to have a runner there is a fantastic experience.”