Catching Up With Chris McCarron 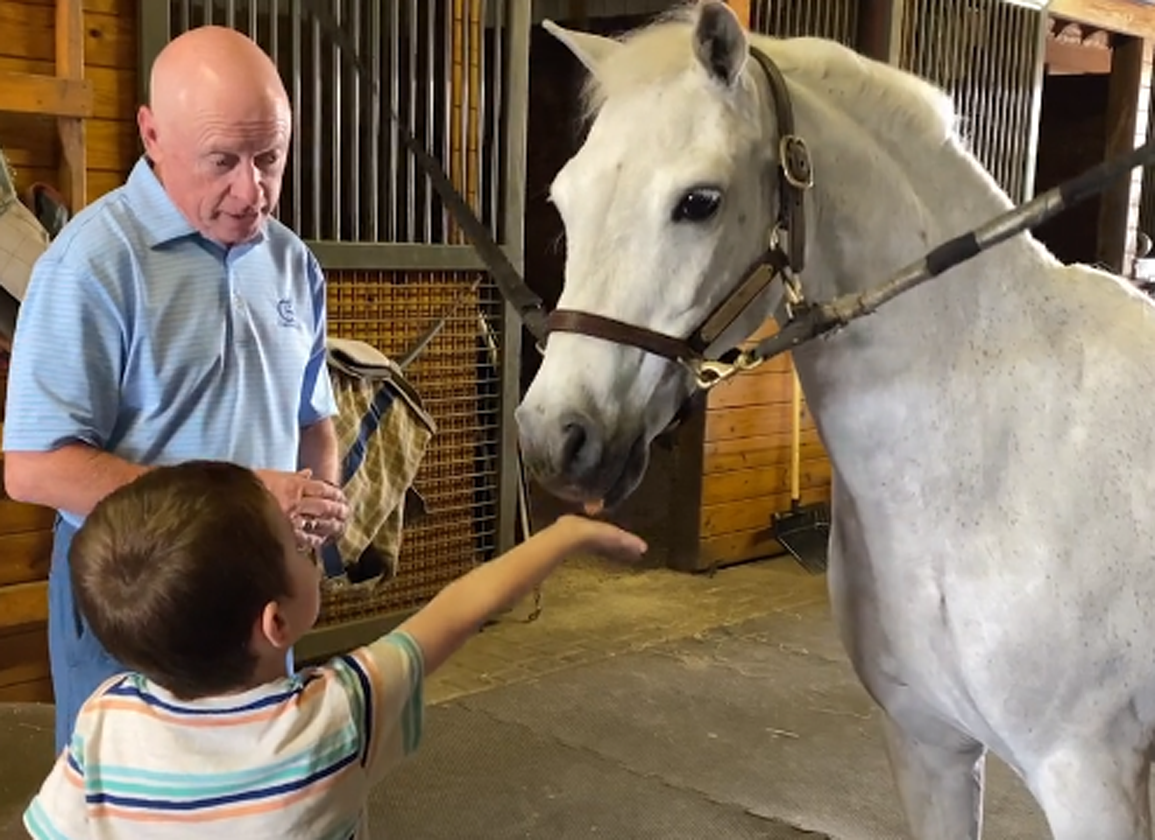 Chris McCarron showing his grandson Griffin the ropes at the barn.

Chris McCarron won his first of two Belmont Stakes in 1986 with Danzig Connection (Danzig) at odds of 8-1, unexpectedly defeating that year's Kentucky Derby winner and Preakness runner-up Ferdinand (Nijinsky II) and giving trainer Woody Stephens the last of five consecutive victories in the Test of the Champion.

The next year, he found himself on the other side of the fence aboard Alysheba (Alydar). Alysheba and McCarron had won the first two legs of the Triple Crown and were on track to complete the series when, coming around the second turn at Belmont, they ran into the heels of Gone West (Mr. Prospector), losing all momentum and settling for fourth behind Kentucky Derby and Preakness runner-up Bet Twice (Sportin' Life).

But of course, Alysheba would return to his winning ways soon enough and earn the year's title for Champion 3-Year-Old Colt, running second by a nose in an iconic dual with fellow Derby winner Ferdinand in the GI Breeders' Cup Classic. Alysheba and McCarron returned the next year to win six Grade Is. 'America's Horse' capped off his career in the 1988 Breeders' Cup Classic, the victory earning him Horse of the Year honors and the title of the world's richest horse.

“He was phenomenal,” McCarron said, crediting the fellow Hall of Famer as the best horse he ever rode. “He was a fantastic ride and brought a lot of joy to my life and my family's life. We traveled a lot with him and he was very special.”

McCarron retired as a jockey after 28 years in racing in 2002. Since then, he served as an advisor and actor in the film Seabiscuit, held the position of vice president and general manager at Santa Anita Park, worked as a racing analyst for TVG Network and launched the North American Racing Academy.

These days, his schedule is not quite as jam-packed as when he was at the pinnacle of racing, but the sexagenarian keeps himself fully occupied. When he's not out perfecting his swing on the golf course, a practice he normally partakes in about four days a week, he finds himself back at the barn giving riding lessons to his young grandson Griffin.

“Griffin lives right near me, about 15 minuted from my house,” he shared. “I get to pick him up from school every afternoon and spend a couple hours with him every day, so we're having a blast together. My two other grandsons live in Sherman Oaks, California and I get to see them a few times a year.”

While he's just starting to get into riding, Griffin undoubtedly has horse sense in his blood. Aside from a grandfather who earned $264 million on the racetrack, his mother Stevie McCarron Wigley is an accomplished equestrian and operates Cloud Nine Farm in Midway, Kentucky.

“His mom is being kind of cautious,” McCarron shared. “I think she seems a little reticent to have him ride too often. I'm sure it's because she doesn't want him to get hurt, but I wish he would ride more often. He's not really totally into it yet, but he enjoys it when he's doing it.”

McCarron said he would be happy if his grandson someday decided to pursue a career in racing, but admits he doesn't want him to follow in his footsteps with his particular job choice.

“It's pretty dangerous and I don't know if I could stomach it,” he said. “I just hope I'm around when he's of the age to decide what he wants to do. When he's 18, I'm going to be in my late eighties, so hopefully I'll make it to that point.” 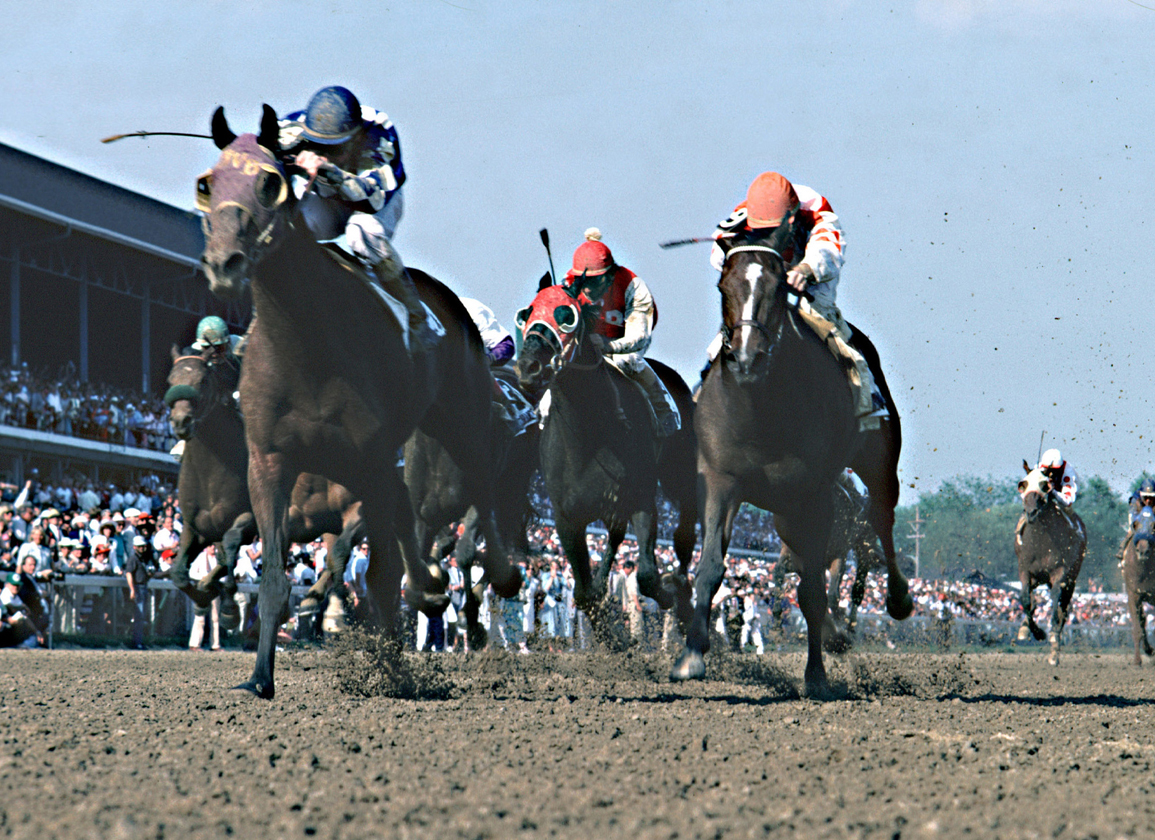 McCarron shared the story of how he decided he wanted to be a jockey when he was a teenager watching his older brother Gregg McCarron excel among the East Coast jockey ranks.

“He started riding when I was a freshman in high school and when I got out of school on the north end of Boston, I would get on the train at three in the afternoon and go three stops to Suffolk Downs,” McCarron recalled. “At the time you had to be 18 or older to get in, so I would actually have to climb the fence to sneak in and watch my brother ride the last few races on the card.”

The older brother got his younger brother a job as a hot walker between McCarron's junior and senior year of high school at Rockingham Park in New Hampshire.

“I was infatuated from day one,” McCarron said. “When I went back to school to graduate from high school, I went from an average student to a less-than-average student because all I could think about was horses and racing. I graduated in 1972 and got a job on the racetrack with my brother's boss. The man who taught him to ride also taught me how to ride and I've been here ever since.”

McCarron said these days, he enjoys popping into the jockeys' room once in a while to chat with the riders and pick their brains.

“I really miss the big days,” he admitted. “I love to go into the jocks' quarters and I appreciate the camaraderie in there. But I don't miss riding on a day-to-day basis.”

Asked how today's top jockeys differ from those of his day, McCarron responded,  “I think the jockeys of today are a little bit more knowledgeable about how the whole industry works. The most prominent and successful riders are very, very smart and they pay attention to all the different things that go on in our industry. They strive to make it a better place and I'm so excited about that.”

McCarron is using his past experiences and accumulated knowledge to further improve the sport by focusing on medication reform.

“I'm thankful for the Horseracing Integrity and Safety Act,” he said. “I worked for quite some time with my colleagues on getting that bill passed and we were ecstatic when it passed last year. I'm all about a level playing field. I want horses to be running on their own merit without any assistance from medication and we're working toward that end. It's going to happen soon and I'm thrilled about that.”

McCarron's ongoing mission is to improve the integrity of the sport, a trait that he also hopes will one day resonate with his grandson.

“The most important thing that I hope Griffin learns is integrity,” he said. “This sport has fallen on some tough times over the past two decades and so it's an absolute must for someone to be honest, straightforward and conduct themselves with integrity. I think that's where success starts. You've got to be honest and truthful about what you're doing, what you're saying and what you believe in. So I hope Griffin follows that lead and becomes someone who is respectable.”