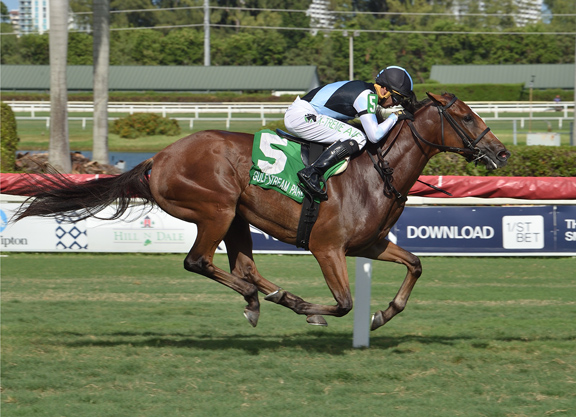 After Spanish Loveaffair (Karakontie {Jpn}) was disqualified for causing interference in the $100,000 GIII Herecomesthebride S. Saturday at Gulfstream, trainer Mark Casse said he would appeal the decision.

“I have the paperwork right here and I am filling it out,” he said just a few minutes after the race.

On the far turn, Spanish Loveaffair got tangled up with I Get It (Get Stormy) and the two appeared to clip heels, which caused I Get It to bounce off the inner rail. It was not exactly clear whether or not I Get It's rider Miguel Vasquez went for a hole that was not there. The stewards reviewed the race for about 10 minutes before making their call.

“I've been through a lot of DQ's in my life and have appealed a few. But it's been about 10 years since I've done that,” Casse said. “I don't want to be a crybaby and I take my lickings. But I thought Vasquez moved into a spot he probably shouldn't have been in. There's no question that they clipped heels, but he initiated the contact. Our opinion is that she should not have been DQ'ed.”

“Do you know what this race meant to her value as a broodmare?” Casse said. “If they hadn't taken her down she would be a half-sister to a Grade I winner who is a Grade III winner herself at Gulfstream Park. The DQ cost us hundreds of thousands of dollars.”

This story was posted in Shared News, Top News and tagged Disqualification, DQ, Gulfstream, Herecomesthebride, I Get It, Mark Casse, Spanish Loveaffair.