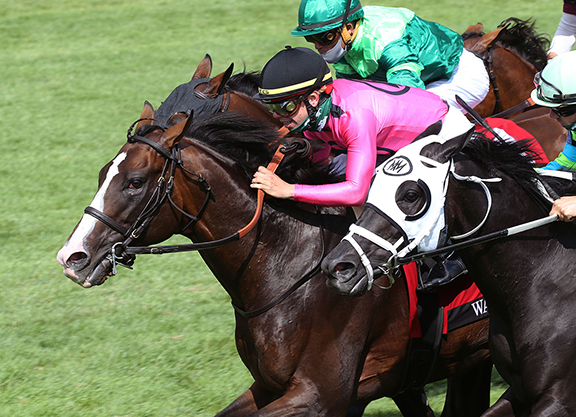 Mark Casse has a strong chance to take home his third GI Ricoh Woodbine Mile with a trio of contenders set to line up for Saturday's “Win and You're In” event for the GI Breeders' Cup Mile.

Gary Barber's War of Will (War Front) tries to secure a Grade I double here off a win in Keeneland's GI Maker's Mile July 10. Winner of the GIII LeComte S., GII Risen Star S. and GI Preakness S. last season, the bay capped his sophomore term with a ninth in the GI Breeders' Cup Classic Nov. 2. Returned to the turf for the first time since his 2-year-old campaign, he finished fifth in the GI Shoemaker Mile May 25, but was disqualified and placed fifth for interference. War of Will made amends last time, getting up in time for a nose success in the Maker's Mile.

“He's coming off that nice win in the Maker's Mark Mile and he's trained as good as I've ever seen him train since that race,” Casse told the Woodbine notes team. “We're expecting him to run well.”

His stablemate March to the Arch (Arch) enters off a victory in the course-and-distance GII King Edward S. Aug. 15. Victor of the GII Wise Dan S. last year, the Live Oak homebred kicked off this term with a win in the Sunshine Millions Turf in January and was third in both the GIII Tampa Bay S. and GIII Appleton S. over the winter. Tenth in the Shoemaker Mile, he was sixth when attempting a title defense in the Wise Dan June 20 prior to his score at this oval last time.

Rounding out the Casse trip is Barber's Olympic Runner (Gio Ponti). A stakes winner on the local synthetic, the gelding was second to local legend Pink Lloyd (Old Forester) in both the GIII Bold Venture S. Aug. 15 and GIII Vigil S. Sept. 5.

A talented member of the fairer sex, Starship Jubilee (Indy Wind) takes on the boys in this event. She won her first four races of the season in the Sunshine Millions F/M Turf Jan. 18, GIII Suwanee River S. Feb. 8, GII Hillsborough S. Mar. 7 and GII Ballston Spa S. July 25. The bay enters off a fourth-place finish in the GI Diana S. at Saratoga Aug. 23.

Another interesting contender here is the sophomore colt Shirl's Speight (Speightstown). Tabbed a 'TDN Rising Star' off his eight-length graduation sprinting on turf here July 4, the Fipke homebred was a decisive winner when stretched to two turns on the synthetic in the GIII Marine S. July 25. Originally scheduled to make his next start in the Sept. 5 GI Kentucky Derby, the bay was withdrawn from contention after developing a cough the weekend before the race. The day the scratch was announced, his connections had named the Oct. 3 GI Preakness S. as his next target, but he shows up here back on turf and taking on his elders instead.

“This [Mile] is still a big step, but it's better than the alternative,” said trainer Roger Attfield. “There was the dirt, the ship, I couldn't send help with him [due to COVID-19 restrictions].”