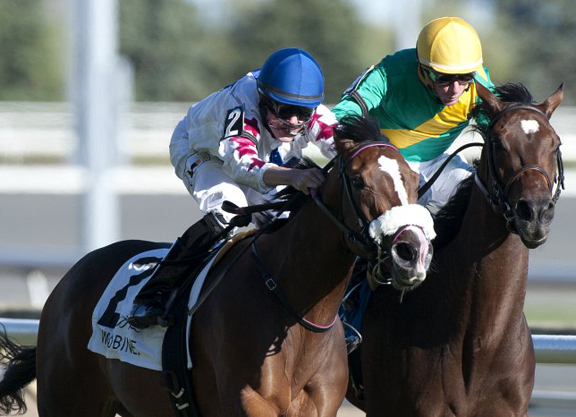 Toronto businessman Rob Marzilli got into the racing game in 2014 and enjoyed almost instantaneous success with Canadian Horse of the Year and champion 3-year-old filly Caren (Society's Chairman). Marzilli, who operates Ram Contracting, a company that deals with custom homes, residential and commercial construction, will send Caren's first foal, a filly by Curlin (

hip 6), through the ring as part of the South Point Sales consignment Tuesday afternoon at the Fasig-Tipton November Sale.

The Curlin filly is well made with a great hip and good angles,” said South Point co-owner Arika Everatt-Meeuse. “She covers good ground and has more substance than her mom at this stage. I really like her. She shows a lot of Smart Strike. She's been well received so far.”

In regard to her alliance with Marzilli, she added, “Rob and I met through Caren at the races and when she retired, he sent her to our farm to start her next career. He has a nice broodmare band of seven mares. I help with matings and care for the mares and foals to the yearling stage. I consider him a friend.”

“Caren was the second horse I bought,” said Marzilli, who was driving down from Canada for the sale with DePaulo Monday. “My daughter wanted a horse as a pet and we didn't have the room for it. We were sitting down at Thanksgiving dinner and somebody said, 'Well, why don't you just buy a racehorse. That's how it started.”

It was family that got Marzilli into racing and Caren's name was an homage to them, combining the first letters of wife Anna, daughters Carmfaye, Elizabeth and Natalia, as well as Rob himself. The bay went on to win eight stakes, including the 2016 GIII Ontario Colleen S. On the board in 13 of 17 starts, she retired in 2017 with nine wins and earnings of $821,790.

“She was awesome,” Marzilli said of Caren. “She was like no other, for sure.”

After watching Caren's success on the track, was it an emotional decision to offer the mare's first foal at auction? Marzilli said no.

“If I don't get good money for her, I'll just keep her,” Marzilli said. “It's exciting to see what she brings, but if she doesn't do well, I'll just hold on to her.”

Marzilli went back to the Society's Chairman well when purchasing then 4-year-old Code Warrior for $190,000 at the 2017 Keeneland November Sale. The dark bay went on to win the 2018 GIII Hendrie S. and GIII Seaway S. in Marzilli's colors and now both she and Caren are part of his 10-strong broodmare band.

“Caren's success together with his other 'daughter'–Code Warrior–really jump started the stud. Obviously, I have a close connection there and now this Curlin filly is pretty exciting. If Society's Chairman fillies can become good producers that would be wonderful and with the Sadler's Wells and Northern Dancer influence, it's what we are hoping for. Rob is certainly giving his mares every chance to make it as moms!”

Code Warrior was bred to Speightstown this year and Caren was bred back to Medaglia d'Oro.

In addition to the broodmare band, Marzilli also has about 15 horses in training.

Asked if planned on expanding that number, Marzilli laughed and said, “If I was a smart businessman, I'd get rid of all of them.” But he added, “We'll play it by ear.”

Marzilli said he sees similarities between Caren and her first foal.

“She doesn't have the white on her that Caren has, but she is built very similarly,” he said.

DePaulo added, “We hope she has her heart, that's for sure.”