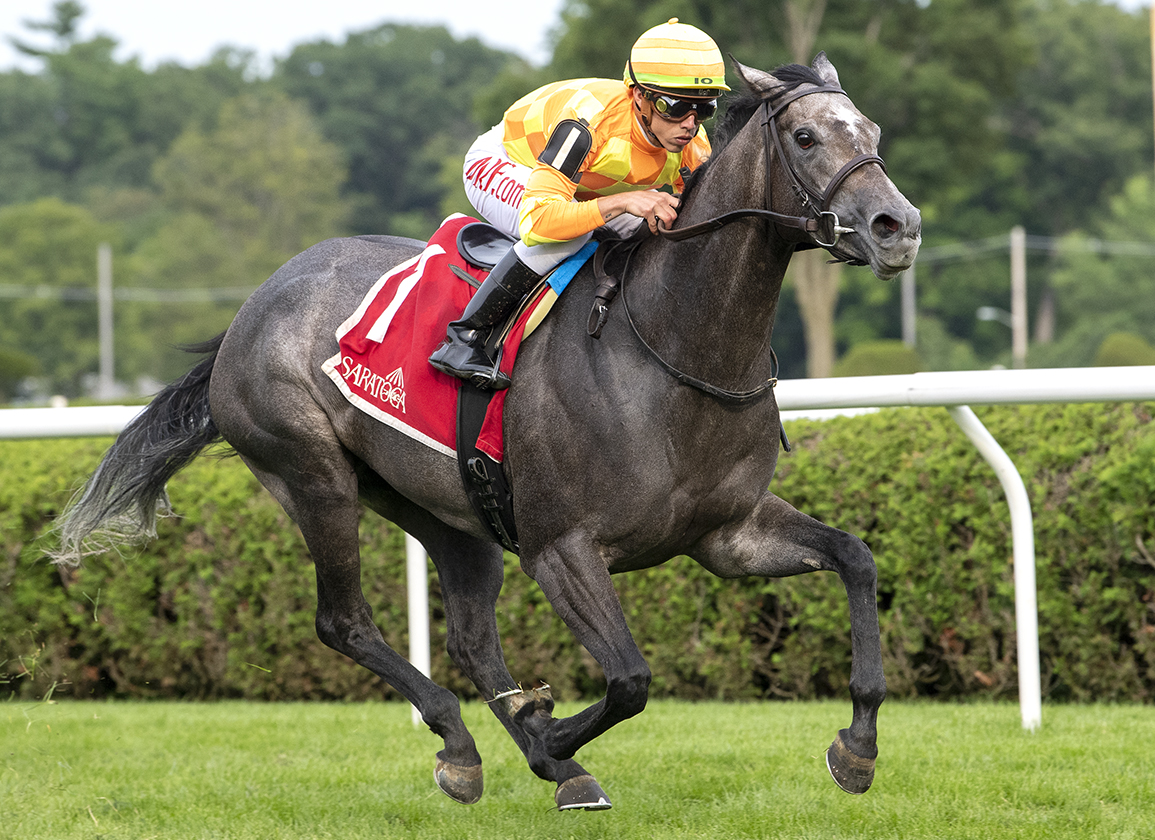 Caravel (Mizzen Mast) carried the colors of her breeder, trainer and now co-owner Elizabeth Merryman to six victories in her eight previous starts. Irad Ortiz climbed aboard Caravel sporting the silks of her new part-owner Bobby Flay for this Saratoga debut and she took her career to the next level with a decisive score in the GIII Caress S. Saturday.

Backed to even-money favoritism off a pair of stakes wins, Caravel was away well from her rail draw and settled to track from third off pacesetting New York native Robin Sparkles (Elusive Quality), who zipped through a :21.64 first quarter. Robin Sparkles turned for home in front with Jakarta (Bustin Stones)–who was only running for purse money–just off her flank and Caravel ranging up in the three path. Caravel found another gear in mid-stretch, powering past the leader to win going away. In Good Spirits (Ghostzapper) rallied late to be second and Robin Sparkles held third.

“The whole turn, she was on the bridle waiting for the time to go,” Ortiz said. “I wanted to make sure to go around the horses like she did last time at Monmouth [winning the Goldwood June 25]. I was able to get in the clear and as soon as I asked, she gave me a really good kick–a good turn-of-foot.”

“I don't know if she's improved, but I think people understand how she needs to be ridden, and the trip is better now,” Merryman said. “I said to [Irad Ortiz, Jr.] just be as quiet as you can leaving the gate because the least twitch of the reins and she's going. It's pretty amazing. You watch Saratoga and just think it's the place to be. To come up here with a filly like that, it's amazing.”

With Flay now the majority owner, Caravel will be transferred to Graham Motion following this victory.

“He's watched her train pretty much every day. He's just been so nice and classy and sweet about her,” Merryman said of Motion. “Bobby Flay now owns a majority interest in her and we made a plan when he was interested in buying to make that change. That was something I was in agreement with from the time of the sale of the majority of her. Graham is in the next barn to me at Fair Hill [in Maryland]. It'll all be good.”

She continued, “Hopefully, the goal is the [GI] Breeders' Cup Turf Sprint and Graham has so much experience going that route. It seemed like a really smart thing to do from my perspective as well. Not that I don't think I could handle it, but with the change in the ownership, Graham has a system that works great and he's been through all that.”

Opening her account with a trio of victories, including the Lady Erie S. last summer, Caravel checked in third in that Pimlico's Hilltop S. in October and returned to winning ways in the state-bred Malvern Rose S. back at Presque Isle Oct. 22. Third in Belmont's License Fee S. Apr. 30, the PA-bred rallied to victory in The Very One S. in Baltimore May 14 and romped in Monmouth's Goldwood S. June 25.

Caravel is the 24th graded winner for Mizzen Mast and one of 61 black-type scorers by that Juddmonte sire. The winner is the first foal out of Zeezee Zoomzoom, a daughter of SW & MGSP Zee Zee (Exchange Rate). Her 3-year-old filly Tipsy Chatter (Bourbon Courage) broke her maiden earlier this year for Merryman. The 9-year-old mare is also responsible for an unraced juvenile gelding named Witty (Great Notion), a yearling colt by Holy Boss and a 2021 colt by Great Notion. Zeezee Zoomzoom was bred back to Street Boss.