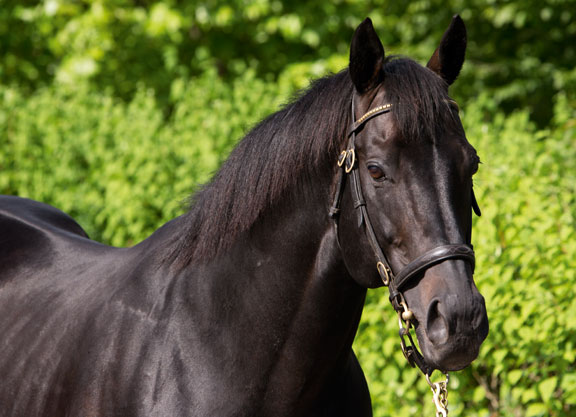 Group 1 winner and Classic sire Cape Cross (Ire) (Green Desert–Park Appeal {GB}, by Ahonoora {GB}) has been euthanized at Darley's Kildangan Stud at age 23 due to complications from old age. He was pensioned from stud duties last year.

Bred by Sheikh Mohammed, Cape Cross is out of the champion 2-year-old filly and dual Group 1 winner Park Appeal, who proved a prolific producer with her descendants also including sires Diktat (GB) (Warning {GB}) and Iffraaj (GB) (Zafonic). Trained initially by John Gosden, Cape Cross moved to the yard of Saeed bin Suroor at four, for whom he won the G1 Lockinge S. at first asking. The dark bay added wins in the following season's G2 Queen Anne S. at Royal Ascot and the G2 Celebration Mile before retiring to stud.

Cape Cross made an immediate impact in his second career, being crowned champion first-season sire. That crop contained one of his true stars in the form of Ouija Board (GB), the winner of seven Group 1s including the Epsom and Irish Oaks, two renewals of the Breeders' Cup Filly & Mare Turf and the Prince of Wales's S. Ouija Board would go on to produce the dual Derby winner Australia (GB) (Galileo {Ire}).

A handful of Group 1 winners followed in his ensuing crops, but it was five years later that Cape Cross's next superstar came along: the Horse of the Year and six-time Group 1 winner Sea The Stars (Ire), widely considered one of racing's greatest ever. Sea The Stars's top-level wins included the Derby and the Prix de l'Arc de Triomphe, and has since sired a Derby winner himself in Harzand (Ire). Six years later, Cape Cross's Golden Horn emulated some of the feats of Sea The Stars when he recorded the Derby/Arc double and was named Horse of the Year.

Harzand wasn't the only European Classic winner last year to boast Cape Cross in his pedigree, with Cape Cross's son Awtaad (Ire) taking out the Irish 2000 Guineas for Sheikh Hamdan.

“He has been an integral part of the Godolphin and Darley stories, and an integral part of Kildangan,” said Joe Osborne, managing director of Godolphin Ireland. “He was our first major success as a stallion. He was champion first-season sire, making an immediate impact, and went on to sire a collection of outstanding racehorses, who left their mark in some of the world's great races. As an individual, he was the boss. You did it his way. He very much ruled the roost.”