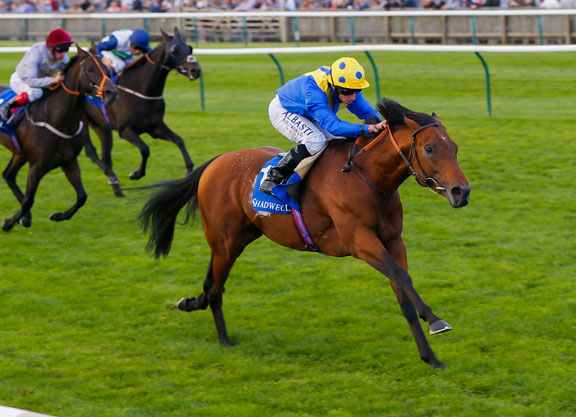 The 8-year-old stallion—a half-brother to this season’s Irish Oaks winner Star Catcher (GB) (Sea The Stars {Ire})—formerly stood at Worsall Grange Farm in Yorkshire and was offered for sale when his previous owner Killashee House Ltd was placed in administration. A number of broodmares and young stock under the same ownership were sold at the Exeter Livestock Centre through auctioneers Kivells on behalf of the administrators Moorfields.

James Morrish, who has conducted two auctions and the private sale of Cannock Chase for Kivells, told TDN on Monday, “I cannot disclose the identity of Cannock Chase’s new owner but he is now at Vauterhill Stud not far from here.”

“Both stallions are in very good condition and are being well looked after at a stud in the Midlands. Potential buyers can arrange an inspection by appointment,” he added.

Bred by Anthony Oppenheimer’s Hascombe & Valiant Studs, Cannock Chase won five races for Saeed Suhail and Sir Michael Stoute, including his top-level strike at Woodbine and the G3 Tercentenary S. at Royal Ascot in 2014, three years after his full-brother Pisco Sour won the same race for Hughie Morrison. This season, Star Catcher became the third offspring of the Horse Chestnut (SAf) mare Lynnwood Chase to win at the Royal meeting when landing the G2 Ribblesdale S. for her breeder before going on to Classic glory at the Curragh.

The former champion amateur rider Lucy Horner, who managed Worsall Grange Farm and was listed as one of the company directors of Killashee House Ltd along with Kahlil de Burca, died last month at the age of 42.