Cannock Chase To Be Sold By Devon Auction House 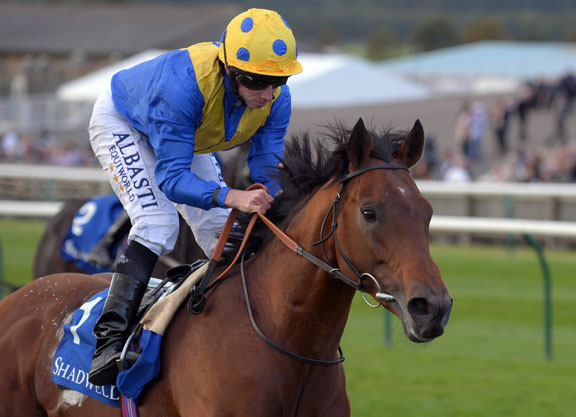 Cannock Chase, the winner of five of his 12 starts, including the G1 Canadian International | Racing Post

Cannock Chase (Lemon Drop Kid), winner of the 2015 GI Pattison Canadian International and a half-brother to last week’s G2 Ribblesdale S. winner Star Catcher (GB) (Sea The Stars {Ire}), is set to be sold through Devon-based livestock auctioneers Kivells along with another 20 horses owned by Killashee House Ltd., which has been placed in administration.

The 8-year-old stallion, bred by Anthony Oppenheimer’s Hascombe & Valiant Studs, and himself a winner at Royal Ascot in 2014 for owner Saeed Suhail and Sir Michael Stoute, has been removed from Worsall Grange Stud in North Yorkshire where he has stood for the last two seasons. He will be sold by private treaty next week. Interested parties will be able to inspect him in his current temporary location, which cannot be disclosed by the administrators until Wednesday.

On Tuesday, a mixture of 20 broodmares, 2-year-olds and yearlings will go under the hammer at the Exeter Livestock Centre. The dispersal sale will begin with an auction of tack at 10.30am followed by the young stock and then broodmares. Among the horses to be sold are six yearling fillies and five yearling colts by Cannock Chase, as well as a 2-year-old colt by Sidestep (Aus) and a 2-year-old Finjaan (GB) filly. The young stock will be sold in pens rather than through the ring.

James Morrish, an auctioneer for Kivells who is overseeing the sale, told TDN on Monday, “The horses are on their way to Exeter from Yorkshire now. I have taken advice from lots of good people, to include Weatherbys and the Thoroughbred Breeders’ Association. We are not Goffs or Tattersalls. We are trying our very best but at the end of the day, horses will still be sold in a livestock centre. However, we are ensuring that the young stock won’t be able to put legs out through the pens and won’t slip. They will be in deep straw and a highly respected vet has seen them as they have gone on to the lorries this morning and another vet will be waiting for them to arrive in Exeter. My instructions from the administrators, Moorfields, are that welfare has to be of the highest priority.”

He continued, “The stallion was picked up by an independent haulier yesterday and has gone to a private yard in the Midlands, and from Wednesday he will be able to be inspected by appointment. Anyone who wishes to do that should contact me. The completion date of that exercise is Friday, 5 July. People can go to see him and then bid me a price. Again, Moorfields are very conscious that they want Cannock Chase to go to the right home, and they would not want him to be knowingly purchased and then put into a sale again. I’ve had a lot of advice from very helpful Thoroughbred stud owners from all over the country.”

Morrish was keen to stress that all the horses who will be offered for sale have been well looked after at Worsall Grange Stud. He added, “There have been no welfare problems on the farm whatsoever. There are other horses still there and I can reassure everybody that all the horses I saw were in very good order, with lots of food and lots of grass. Those who were in stables were in clean boxes and the staff there are doing a super job.”

The company directors of Killashee House Ltd. are listed as Kahlil de Burca and Lucy Horner, neither of whom could be reached for comment on Monday. Horner has been stud manager at Worsall Grange Stud, which is also listed as standing the stallions Dylan Mouth (Ire) and Peace Envoy. St Leger winner Millenary (GB) returned to Nunstainton Stud last year.

Full details of Tuesday’s auction can be found here.