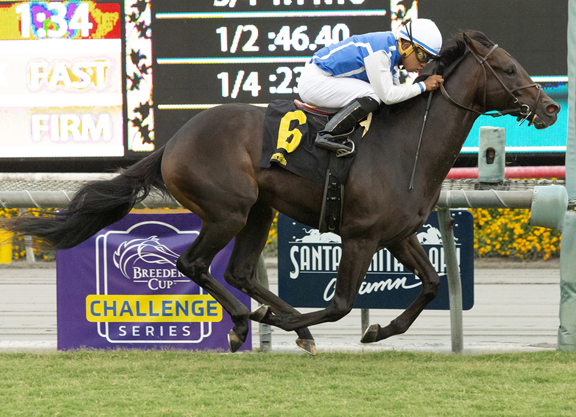 Wertheimer et Frere homebred Kanderel (Candy Ride {Arg}) was given a heads-up ride by five-pound apprentice Jorge Velez, got a dream run through at the fence and shot through when an opening appeared nearing the entrance to the Santa Anita stretch and finished full of run to become Saturday's third 'TDN Rising Star.'

A 6-1 gamble for a barn not known for its proficiency with first-time starters, the dark bay sat a two-path trip from gate six and commenced a steady advance with a little less than a half-mile to race. Shifted down to the inside at the point of the second turn, Kanderel was driven through a gaping hole at the quarter pole and covered his final two furlongs in a very smart :23.57, defeating the well-meant U.S. firster Liar Liar (Ire) (Dream Ahead) by 3 1/4 lengths.

The Wertheimers acquired Kanderel's dam, a half-sister to MGSW Old Trieste (A.P. Indy), for $600,000 as a weanling at Keeneland November in 2000 and raced her at first in France with Criquette Head, for whom she won her maiden and placed three times in listed company. Repatriated and turned over to Gary Mandella, Stormica was third in the GIII Desert Stormer H. and was retired following a victory in the 2005 Richmond H. at Golden Gate Fields.

Stormica, who was bought back on a bid of $9,500 at KEENOV in 2017, produced an English Channel filly in 2018 and was most recently covered by Exaggerator. The wildly successful cross of Candy Ride over Storm Cat-line mares has yielded Horse of the Year Gun Runner, champion Shared Belief and additional Grade I winners Sidney's Candy, Evita Argentina and Capt. Candyman Can. GISW Mastery, who is out of a mare by the aforementioned Old Trieste, has a second dam by Storm Cat.