Can the Man Colt Upsets DeMille 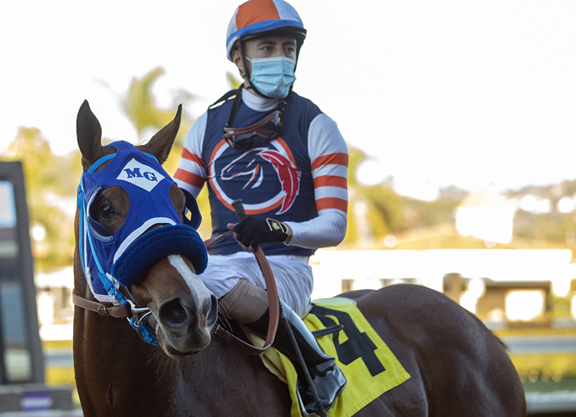 Beer Can Man, making his first start for Little Red Feather Racing and Kevin Bogart's Sterling Stables and trainer Mark Glatt, reeled in pacesetting Commander Khai in the final strides to win the GIII Cecil B. DeMille S. at Del Mar Sunday. Sent off at 19-1 in his first try at a mile and away from Indiana Grand, Beer Can Man settled in third along the rail as Commander Khai took the field through fractions of :22.53 and :46.84. Commander Khai attempted to shake loose in upper stretch, but Beer Can Man was tipped out and bound past that foe while before holding off Caisson to the wire.

“One jump out of there he came [back] to me,” said winning rider Juan Hernandez. “He settled real well. I just found my spot tracking the leaders and I was happy. At the quarter pole, I asked him to go and he did. He really fired. He didn't want to let horses go past him, either. He's a nice horse.”

Racing for breeder Ron Patterson and trainer Thomas Short, Beer Can Man graduated going five furlongs over the Indiana Grand turf Aug. 31 and he was purchased privately following an allowance win over the same Sept. 30.

“We've had him about six weeks,” Glatt said. “We entered him the first weekend of the meeting, thinking we could run then and then come back in this race. But that race didn't go. So [the owners] told me to get him ready to go a mile. I was a little skeptical to be honest, but the horse relaxed great, Juan put a nice ride on him and he got the money.”

Beer Can Man is the first graded winner for his sire Can the Man, winner of the 2014 GIII Affirmed S. The stallion's three stakes winners include Spectacular Gem, a two-time stakes winner on the turf last year and winner of this year's Kentucky Downs Preview Tourist Mile S. He has also been represented by Truck Salesman, second in this year's G3 Al Shindagha Sprint at Meydan.