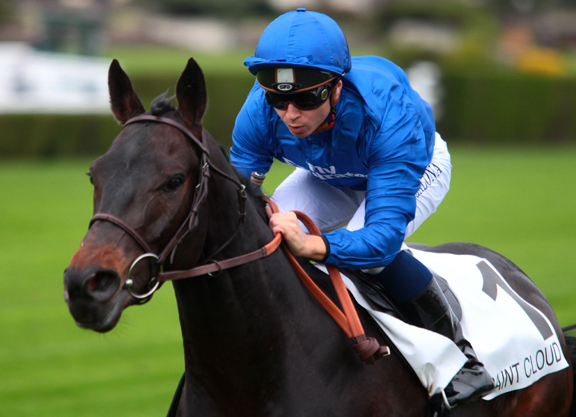 A total of 210 individual horses from no fewer than 13 racing jurisdictions worldwide have been entered at the first stage for the HK$84.5 million (US$10.8 million) Longines Hong Kong International Races to be staged Sunday, Dec. 10 at Sha Tin Racecourse. Of those entered, 59 horses are Grade I/Group 1 winners from Europe, Japan, the United States, South Africa and Australasia.

Three of the top-10 rated horses in the latest edition of the Longines World’s Best Racehorse Rankings have been, including sixth-ranked Cloth of Stars (Ire) (Sea the Stars {Ire}), who is being aimed for an appearance in the G1 Longines Hong Kong Vase (2400m), the South China Morning Post reports. Owned by Godolphin and trained by Andre Fabre, the 4-year-old annexed the G1 Prix Ganay this past May and exits a sparkling runner-up effort behind star filly Enable (GB) (Nathaniel {Ire}) in the G1 Prix de l’Arc de Triomphe at Chantilly Oct. 1. He could be joined in the field by Highland Reel (Ire) (Galileo {Ire}), the 2015 Vase hero who just failed in defence of his title last December; and Highland Reel’s year-younger full-brother Idaho (Ire). Japan’s Satono Crown (Jpn) (Marju {Ire}) was not among the entrants, but the Land of the Rising Sun could still be represented by the classy G1 Arima Kinen winner Satono Diamond (Jpn) (Deep Impact {Jpn}) as well as G1 Kikua Sho victor Kiseki (Jpn) (Rulership {Jpn}).

Hong Kong’s Beauty Only (Ire) (Holy Roman Emperor {Ire}) is the only one of last year’s four winners to return for a title defence, in his case in the G1 Longines Hong Kong Mile. Trainer Richard Fahey has given G1 Queen Anne S. hero and top European miler Ribchester (Ire) (Iffraaj {GB}) an entry into the Mile, while the always-formidable Aidan O’Brien stable has entered the 3-year-old War Front duo of Lancaster Bomber and the filly Roly Poly. The Japanese, whose 78 entries (51 horses) are tops among any country, could have a say in the Mile, won in 2015 by the now-retired Maurice (Jpn) (Screen Hero {Jpn}). Neorealism (Jpn) (Neo Universe {Jpn}) raided to win last year’s G1 Queen Elizabeth II Cup (2000m) and holds entries for the Mile and G1 Longines Hong Kong Cup, as does former G1 Dubai Turf hero Real Steel (Jpn) (Deep Impact {Jpn}). G1 Yasuda Kinen winner Satono Aladdin (Jpn) (Deep Impact {Jpn}) could also make the trip, while Heart to Heart (English Channel) is among the handful of nominations from North America.

Local horses have won 13 of the 18 runnings of the G1 Longines Hong Kong Sprint, and the likes of Lucky Bubbles (Aus) (Sebring {Aus}), Mr Stunning (Aus) (Exceed and Excel {Aus}), Blizzard (Aus) (Starcraft {NZ}) and Thewizardofoz (Aus) (Redoute’s Choice {Aus}) will look to follow in the steps of last year’s champion Aerovelocity (NZ) (Pins {Aus}). Redkirk Warrior (GB) (Notnowcato {GB}), once favored for the Hong Kong Derby, but now trained in Australia by David Hayes and partners, could contest the Sprint, but is unlikely given the Australian government’s ongoing assessment the HKJC’s protocols regarding traveling horses to and from the new Conghua complex in mainland China. Australian horses currently must complete 180 days in quarantine prior to returning home. Just 17 Australian horses, down from 30 last year, have been entered. Librisa Breeze (GB) (Mount Nelson {GB}), who took advantage of deep ground in the G1 QIPCO British Champions Sprint Oct. 21, is a possible contender from the UK, though no European-based horse has ever won the Sprint.

The Hong Kong Cup is the richest of the day’s events at HK$25 million (US$3.2 million). Decorated Knight (Ire) (Galileo {Ire}) is a dual Group 1 winner this term, including his 25-1 upset of the G1 QIPCO Irish Champion S. Sept. 9. Blond Me (GB) (Tamayuz {GB}) is confirmed for the trip over to Hong Kong, having taken the GI E. P. Taylor S. in her most recent trip to the post, while Smart Call (SAf) (Ideal World), who defeated the boys in the G1 J & B Met H. in 2016, could prove an intriguing fast-ground participant should she get the green light from trainer Sir Michael Stoute. Werther (NZ) (Tavistock {NZ}) was forced to miss the 2016 International meeting via injury, but represents the leading local hope to return the Cup to Hong Kong following victories by Japan’s A Shin Hikari (Jpn) (Deep Impact {Jpn}) in 2015 and Maurice (Jpn) (Screen Hero {Jpn}) last year.

“It is very pleasing to see such strong international and domestic representation among the entries for this year’s Longines Hong Kong International Races, which is well-established as one of horseracing’s premier international occasions,” said Anthony Kelly, executive director of racing business and operations for the HKJC. “We are delighted to have received a very healthy number of entries with 26 more horses entered than last year, and nominations from Japan, Britain and Ireland noticeably up. Given the uncertainty created by the ongoing situation about horses travelling to and from Australia to Hong Kong, it isn’t surprising to see their number of entries reduced for this renewal. It is a mark of the event’s draw that 17 Australian horses have nonetheless been entered.”