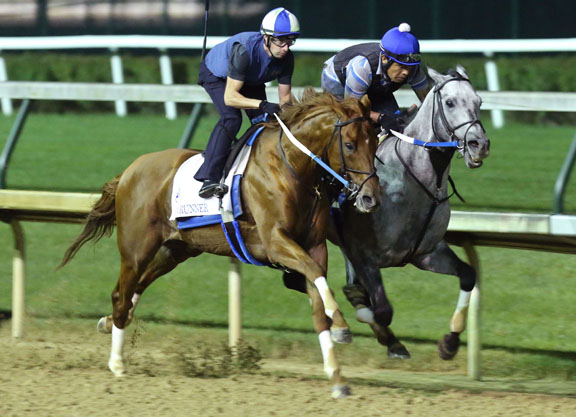 Winchell Thoroughbreds and Three Chimneys Farm's Gun Runner (Candy Ride {Arg}), scheduled to ship to California Monday morning ahead of a tilt at the Nov. 4 GI Breeders' Cup Classic, turned in a bullet five-furlong breeze in :59.80 at Churchill Downs Sunday. Jockey Florent Geroux started Gun Runner off two lengths behind stakes-placed workmate Gettysburg (Pioneerof the Nile) and worked in splits of :24.40 and :35.60 before finishing even at the wire and galloping out six furlongs in 1:13 and seven furlongs in 1:27.80, according to Churchill Downs' clocker John Nichols.

“He felt great,” Geroux said. “He worked with a nice horse and did everything perfectly. He typically doesn't do anything fancy in his works and today was no different. He did everything on his own and I just wanted to keep him happy. He's really turned into a faster and stronger horse this year. I think back last year and he acted like a teenager and this year he's grown into a man. When I'm on his back, I feel like I don't have to help him as much because he does everything so well on his own.”

“There's a fine line of being prepared and over prepared,” Three Chimneys's Chief Operating Officer Chris Baker said. “[Trainer] Steve [Asmussen] and his team have done a masterful job at keeping him in the right spot his entire career, especially this year.”

Winchell racing manager David Fiske added, “I've told Steve before you can put a green screen behind Gun Runner and he'd work the same on any racetrack in the country. He has his workmate Gettysburg and they seem to be a well-matched pair. Everything went according to plan and we'll see how he comes out of the workout. He's scheduled to fly to Santa Anita [Monday]. Steve's had a fair amount of success flying out to California early. So, it's pretty much standard. He'll train up to the Breeders' Cup.”