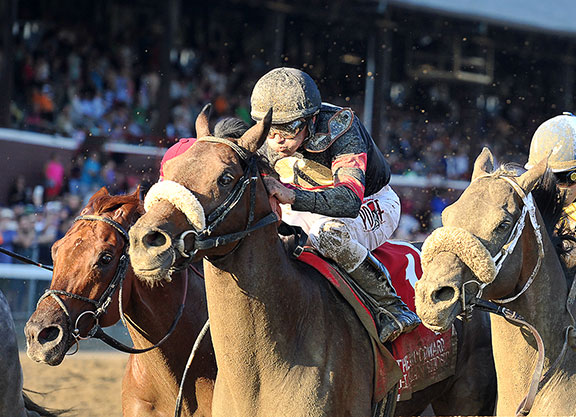 Stronach Stables' Shaman Ghost (Ghostzapper) tuned up for Saturday's GI Pegasus World Cup with a bullet half-mile breeze in :47.70 (1/28) at the Palm Meadows Training Center Sunday morning. With regular exercise rider Kelvin Pahal in the irons, Shaman Ghost recorded fractions of :11.88, :23.64, and :35.90 (video) and he galloped out five furlongs in 1:00.48. In his previous work, the bay went five furlongs in company with graded stakes winner Unified (Candy Ride {Arg}) in 1:01.90 Jan. 14.

“I thought today went good; I waved [Kelvin] on and he finished up good and galloped out good,” trainer Jimmy Jerkens said. “I wouldn't have minded if he had company today either, but it just worked out that he didn't. He was willing enough on his own, so that was okay.”

Shahman Ghost will blow out “down the lane a little bit” at Gulfstream Park the day before the Pegasus, provided the weather cooperates, according to Jerkens.

Of participating in the inaugural Pegasus Cup with a horse owned and bred by the race's creator, Frank Stronach, Jerkens added, “Sure, it's exciting…and nerve-wracking, of course, because so much is at stake. But at least he's not 4-5. If it's nerve-wracking for me, how must it be for [Bob Baffert and Art Sherman]?”