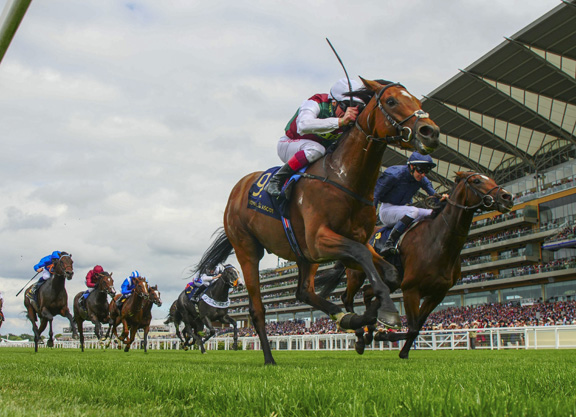 In last year's inaugural GI Pegasus World Cup Turf Invitational S. at Gulfstream Park, Chad Brown brought a single gun to the fight. In fact, it was more of a cannon. Klaravich Stables and William Lawrence's Bricks and Mortar (Giant's Causeway) made short work of his rivals that day–winning by 2 ½ lengths–and proceeded to carve out a championship-worthy season consisting of five additional graded wins, including the GI Breeders' Cup Turf at Santa Anita. Looking at this season's Pegasus World Cup Turf, Brown-who is favored to add his fourth training title at Thursday's Eclipse Awards at Gulfstream–may not have a horse of the caliber of the likely Horse of the Year, however, he is well represented by a trio of contenders-Without Parole (GB) (Frankel {GB}), Instilled Regard (Arch) and Sacred Life (Fr) (Siyouni {Fr}).

OXO Equine LLC's Instilled Regard, who kicked off his career with Jerry Hollendorfer, rounded out his juvenile campaign with a second-place effort–after getting promoted via DQ–in the GI Los Alamitos Derby. On the Triple Crown trail at three, he won the GIII Lecomte S. before finishing fourth in the GII Risen Star S., GI Santa Anita Derby and GI Kentucky Derby. Turned over to Brown thereafter, the dark bay failed to make an impact when a well-beaten ninth in the GI Pennsylvania Derby before trying turf for the first time in the nine-furlong GI Hollywood Derby at Del Mar where he finished a respectable third behind stablemate Raging Bull (Fr) (Dark Angel {Ire}).

“His pedigree suggested he could run on both surfaces,” explained Brown regarding the decision to try the colt on the turf. “I thought his dirt races were very good, but the more that we worked with the horse and just watched him move, he clearly showed that he'd be able to at least handle the turf. So, I think he's a dual surface horse.”

A close-up second in a Keeneland allowance on the turf last April, he was given one more chance on the dirt and he didn't show much, finishing sixth in Churchill's GII Alysheba S. Third when returned to the grass for an Aqueduct optional claimer in November, he rounded out the year with a victory in the nine-furlong GII Fort Lauderdale S. over the Gulfstream lawn Dec. 14.

Reflecting on the win, Brown explained: “I think he established good position in the race, which was good. He didn't fall too far behind, which was also good. I think he settled real nicely and really cooperated with [Irad Ortiz Jr.], and I think he got a great trip, too. We know we have a talented horse there. He has good turn of foot. He's a really quality class horse, but you need to get a good trip, too, and Irad was able to give him a really good ride. So it all worked out.”

Ortiz Jr., who was aboard for Instilled Regard's two most recent starts, will be back in the saddle for Saturday's PWCT.

“He needs some sort of pocketed, ground-saving trip and needs to find some room at some point,” added Brown. “That will be a much tougher race than the last race he was in, so some sort of wide trip with no cover won't work for him.”

Looking beyond the Pegasus Turf with the graded winner on both turf and dirt, Brown expects to keep the 5-year-old on the grass for the foreseeable future.

“He's won some nice races on both, but at this stage of his career, I think that turf's going to suit him better moving forward, especially from a soundness standpoint,” he offered. “It seems to be a little easier on him. He seems to exit his races and his works on the turf a little better.”

Another horse who joined Brown's team after the fact, John and Tanya Gunther's Without Parole reeled off four consecutive victories in England at three, headed by the G1 St. James's Palace S. at Royal Ascot. Unable to recapture that form in five subsequent Group 1 starts through May of 2019, he joined Brown's Saratoga string last summer, but didn't make his stateside debut until the GI TVG Breeders' Cup Mile, where he finished third-beaten just under three lengths-by stablemate and Eclipse Award finalist Uni (GB) (More Than Ready).

“Immediately he showed us that he's a quality horse,” recalled Brown. “He's a good mover and integrated very well into our program. He started training really well, so we ended up taking a shot at the Breeders' Cup off a layoff, and he ran super. It's not like me to do something like that, but we didn't really have any other options where to run him. He was ready around that time, and we gave it a shot.”

He added, “The race was very impressive. He ran really huge to be third. Considering how much he was up against, his first time running in the States and off that long of a layoff, a new program, new rider–new everything. So, he really ran well and Irad [Ortiz Jr.], again, gave him a good trip.”

According to Brown, Frankie Dettori, who has accompanied the English-bred in all nine overseas starts, including his St. James's victory, is slated to ride in the Pegasus Turf.

“I hope he breaks well and get some sort of decent position in the field,” said Brown. “I'd like to see him saving ground, following the right horses. I think if he gets the same [type of trip as the Mile] turning for home, I think we're going to see a pretty good turn of foot. He's trained exceptionally well for this race.”

Rounding out the Brown triumvirate, Sacred Life won all three of his starts at two, including the G3 Prix Thomas Byron at Saint-Cloud. He later won or placed in four of five starts at three–including two at the Group 3 level–before ending his European campaign with a fourth in the G3 Exbury at Saint-Cloud in March. Secured by a partnership of Michael Dubb, Madaket Stables, Wonder Stables and Bethlehem Stables and transferred to Brown, he was runner-up in both the Lure S. and GII Bernard Baruch S. at Saratoga last summer before accounting for his first stateside win in an 8 1/2-furlong Keeneland allowance in October. In his most recent start, he came up a half-length short in Del Mar's GII Seabiscuit H. Nov. 30.

“He's very consistent in his races and he seems to be improving,” said Brown. “He's actually moving better now than he was for most of last year. I'd say he is an average mover when he trains on the dirt, but his turf works are really solid. He's a little bit of a tricky horse to ride. He can be a little headstrong and he's got a little bit of a light mouth on him, but he's a very hardy horse and tries hard. He can be a tough horse [his personality] and I like that about him. I've been impressed with him, particularly the last three months.”

In regards to the 5-year-old's latest victory Brown added, “When we were training him for the Seabiscuit and I had never seen this horse breeze that well. He's always a good workhorse, but his last couple works for that race were particularly good. They really caught my attention. He came out of the race good. He was just an unlucky loser in that race. I thought he looked like he was much the best. He just had a really difficult trip and just didn't have enough time to get there, although he tried. He came home very, very fast in the last quarter.”

And according to Brown he has been pleased with the bay since his arrival at Brown's Palm Meadows training base in Florida.

“He's come down to South Florida and trained just as well, if not even better than before, so he really deserves a shot in the race,” he said.
Brown confirmed that Sacred Life will be partnered by Jose Ortiz for the first time in the Pegasus Turf.

“He doesn't have a lot of early speed and he's going to need some pace in front of him,” he said. “He's going to have to find a way to follow the right horses and get himself in some sort of striking position when they turn for home and not find himself too far back. I think that's the key to this horse.”