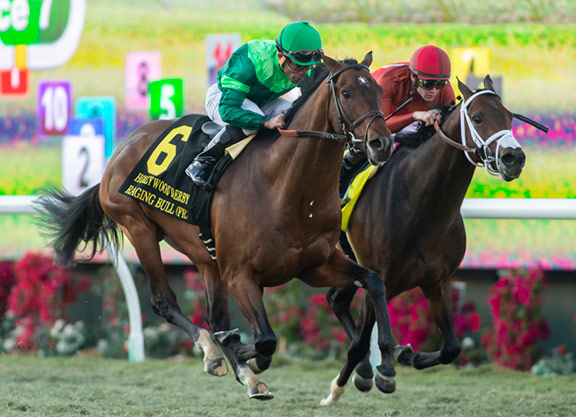 Trainer Chad Brown brings a three-pronged attack in the latest renewal of the GI Fourstardave H., headed by a pair of Grade I winners–Uni (More Than Ready), winner of the GI Matriarch at Del Mar last December and GI Hollywood Derby victor Raging Bull (Fr) (Dark Angel {Ire}) on the same weekend. Since those victories, Uni has added another victory to her resume in Belmont’s June 29 Perfect Sting S., while Raging Bull finished fourth in both Keeneland’s Apr. 12 GI Maker’s 46 Mile S. and the nine-furlong GI Turf Classic at Churchill May 4. Stretching out to 10 furlongs for his latest, he finished a credible third stablemate Bricks and Mortar (Giant’s Causeway) in the GI Manhattan S. June 8. Rounding out the Brown triumvirate, Made You Look (More Than Ready), a graded stakes winner when formerly with trainer Todd Pletcher, won his first start for Brown-a Belmont optional claimer in May-but has been winless since, including a fourth last time out in a soggy edition of Belmont’s GIII Forbidden Apple S. July 12.

Mark Casse is represented by the consistent Got Stormy (Get Stormy), on the board in all four starts this term including the latest a victory in Saratoga’s De La Rose S. Aug. 3. Tyler Gaffalione, who was aboard for the victory, opts to ride the other Casse entry, March to the Arch (Arch), victorious in the GII Wise Dan S. at Churchill June 15. The gelding finished fifth in the Forbidden Apple last month.

Adding some intrigue to this renewal, Ostilio (GB) (New Approach {Ire}), bred by Sheikh Mohammed Obaid Al Maktoum, went to the main track had a strong blowout down the Oklahoma straight Thursday.

“He got across it really well,” said trainer Simon Crisford, running a horse for the first time at the Spa. “We’re very happy with him. It was just a couple of furlongs, what we would call a half-speed, a swinging canter for two furlongs.”

The chestnut holds four wins and five seconds from 11 starts, including scores in the Britannia S. at Royal Ascot last season and the G2 Prix Daniel Wildenstein at Longchamp in October.

“The Britannia is a very tough race for 3-year-olds at a straight mile,” he said. “It’s quite a demanding test and he made nearly all the running. When he went to France [for the Wildenstein]– a right-handed track–it’s an easier mile than what we had to do at Ascot, but he won that nicely and was very resolute and strong at the finish.”

Winless in two starts this year, Ostilio finished eighth last out in the G1 Lockinge at Newbury.

“We felt a flat oval track would suit him really well,” said Crisford. “It’s a huge race and it fits into his program really well as hasn’t run since May and he’s all about the second half of the year. It’s a very good starting point for him. He’s coming here fit and well and we hope he can acquit himself well.”

Typically near the front end, Ostilio drew post five in the 10-horse field.

“He races quite freely,” said Crisford. “We’ll see how quick he is out of the gate compared to American horses. We haven’t schooled him to be American quick. He’s very much European-quick out of the gates, and that’s different from here. Andrea [Atzeni] will ride him as he finds him once he jumps. Hopefully, he jumps well and gives him a forward ride, if he jumps into that position.”